In recent months China has enacted a number of policies with the potential to increase coal prices at home and abroad. The government called on provinces to shift away from a sales tax on the volume of coal to one on the value of coal sales. Regulators banned the use of low-grade coal. And last week, regulators reinstated a tariff on the import of coking and thermal coal returning rates back to MFN levels. This marks a sharp contrast from six years ago when policymakers - eager to access cheap coal - eliminated coal tariffs and resisted the introduction of ad-valorem tax on coal sales. The change in opinion reflects a decline in the role of coal in China.

Consumption of Coal and Electricity by Sector, 2012 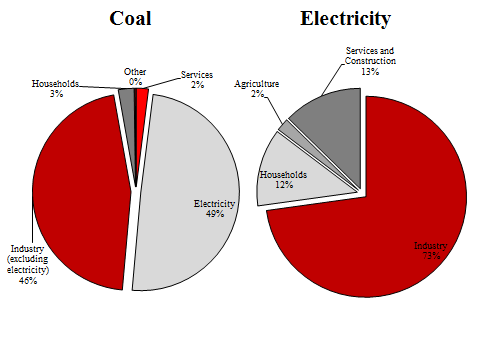 When industrial output growth was growing at double digits, the government had a greater incentive to keep the cost of coal down. Although coal power generation is relatively dirty, it was the cheapest and easiest way to ensure China could generate enough electricity to keep pace with industrial demand. For example, China removed tariffs on thermal coal imports in 2008 in part because thermal power producers were on average loss making due to record coal prices and rapid growth in electricity demand.

However, today demand is no longer growing very fast. Industrial value added growth has slowed from 20 percent in the second quarter of 2010 down to 8.5 percent in first three quarters of 2014.  The largest consumers of coal and thermal power in industry – such as steel and aluminum - are struggling with overcapacity.  Growth rates of electric power generators are half the level of the past decade.

Protecting thermal power producers is also no longer as important as it once was. Coal prices are down 60 percent from the peak at the end of 2010. As a result, thermal power plants are experiencing record profitability up seven times the level of three years ago. Meanwhile, it is now domestic coal mines struggling to maintain profitability as demand slows. This makes it even easier to support hikes in coal prices.

China’s newfound acceptance of higher priced coal is unlikely to reverse. The slowdown in the industrial sector is a long term trend, driven by structural reforms encouraging a reallocation of resources to the service sector. Services – now the main driver of output growth - accounts for less than one-fifth of electricity demand and only 2 percent of coal demand. Further, Chinese policymakers - now committed to wage a war against pollution – are even more intent on reducing coal consumption. Since 2012, thermal power has accounted for less than half of capacity additions to electric power production for the first time. The government’s goal is to bring the share of coal-powered energy consumption down to 62 percent in 2020 from 66 percent today. The days of growing demand for cheap coal are nearing an end.