The pace of Chinese intervention in the foreign exchange market has slowed dramatically, but just how much is a bit of an open question.

The People’s Bank of China (PBoC) releases a monthly series on foreign exchange reserves. This number receives a lot of attention because it is high frequency and gives the overall stock of foreign reserves. Based off these numbers, the scale of Chinese currency intervention over the course of the year has been $104 billion. While this is much less than the level of intervention seen in 2011 ($334 billion), it is still quite high in the aggregate.

Unfortunately, the monthly series released by the PBoC is not the best measure of intervention. This is because the figure is adjusted for changes in exchange rates. For example, if the dollar appreciates versus the other currencies held in China’s foreign exchange reserves, the assets held in those other currencies will be worth less in dollar terms. 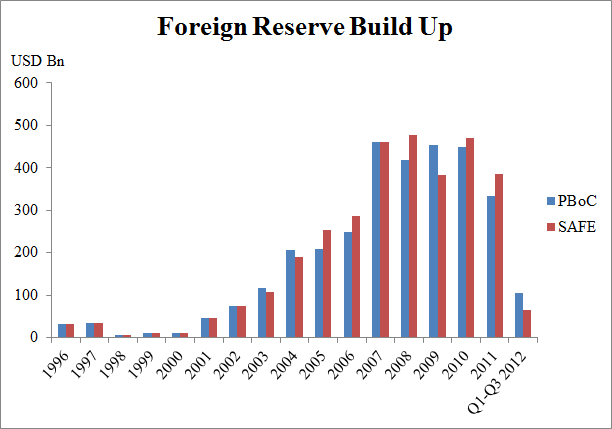 Since 1996, SAFE has recorded increases in foreign exchange reserves in accordance with the IMF Balance of Payments Manual 5th Edition. Under this methodology, increases are recorded by the price at the time of the transaction and not adjusted for subsequent changes in exchange rates.

When calculated according to the SAFE numbers, the level of intervention in the first three quarters has only been $64 billion, a substantially lower number than the $104 billion shown by the PBoC. This is because changes in exchange rates have increased the value of China’s foreign reserves by $40 billion.

Both the PBoC foreign reserves number and the SAFE balance of payments number are accurate but they show different things.  The PBoC number is a good measure of the current value of China’s foreign reserves. The SAFE number is a better measure of intervention because it shows the value of the transactions taken by the government to intervene in the foreign exchange market.