The Unrelenting Weight of Waiting: China’s Reserve Accumulation in 2013 and Outlook for 2014

Earlier today, the People’s Bank of China (PBoC) announced that its foreign exchange reserves grew by $157 billion in the fourth quarter of 2013, which brings the total increase in reserves to $508 billion for 2013, making it largest year of reserve accumulation ever (although not the largest ever 12-month total). To put that in context, the increase in China’s reserves is larger than the entire 2013 economic output of Argentina, Belgium, or Taiwan. But it is also important to put that number in the context of the Chinese economy, which is nearly twice as large as it was at the end of 2008. It also illustrates the increasing unsustainability of China’s systemic imbalances as it occupies a large and increasing space in the global economic system.

Policy that fights the market will necessarily need to be commensurately larger if it is to be effective. It seems likely that the appreciation pressure and resulting reserve accumulation experienced in 2013, at least partially, catalyzed many officials in China to voice their concern with the current policies.

Exhibit 1: Reserve accumulation as a percent of GDP vs. RMB appreciation 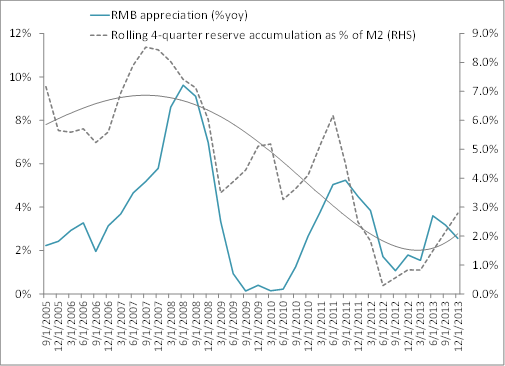 Adjusting the reserves for changes in valuation (see previous post) of the non-USD foreign currencies estimated within the portfolio, reserves grew by $494 billion in 2013. The net contribution of FX gains in 2013 was broadly flat with large offsetting gains and losses in Q3 and Q1, respectively, and de minimis gains in Q2 and Q4.

This marked pick-up in reserve accumulation, coupled with persistent trading of the renminbi at the top of its official trading range and a premium on the offshore CNY (exhibit 2), suggests that pressure to appreciate could continue into 2014. Indeed, Cline 2013 finds that the CNY is still about 5% undervalued. But given that the CNY has already appreciated by over 4% versus the dollar and nearly 10% to its highest level ever on a real trade-weighted basis since the beginning of 2012 (exhibit 3), how much more scope could there be for appreciation? 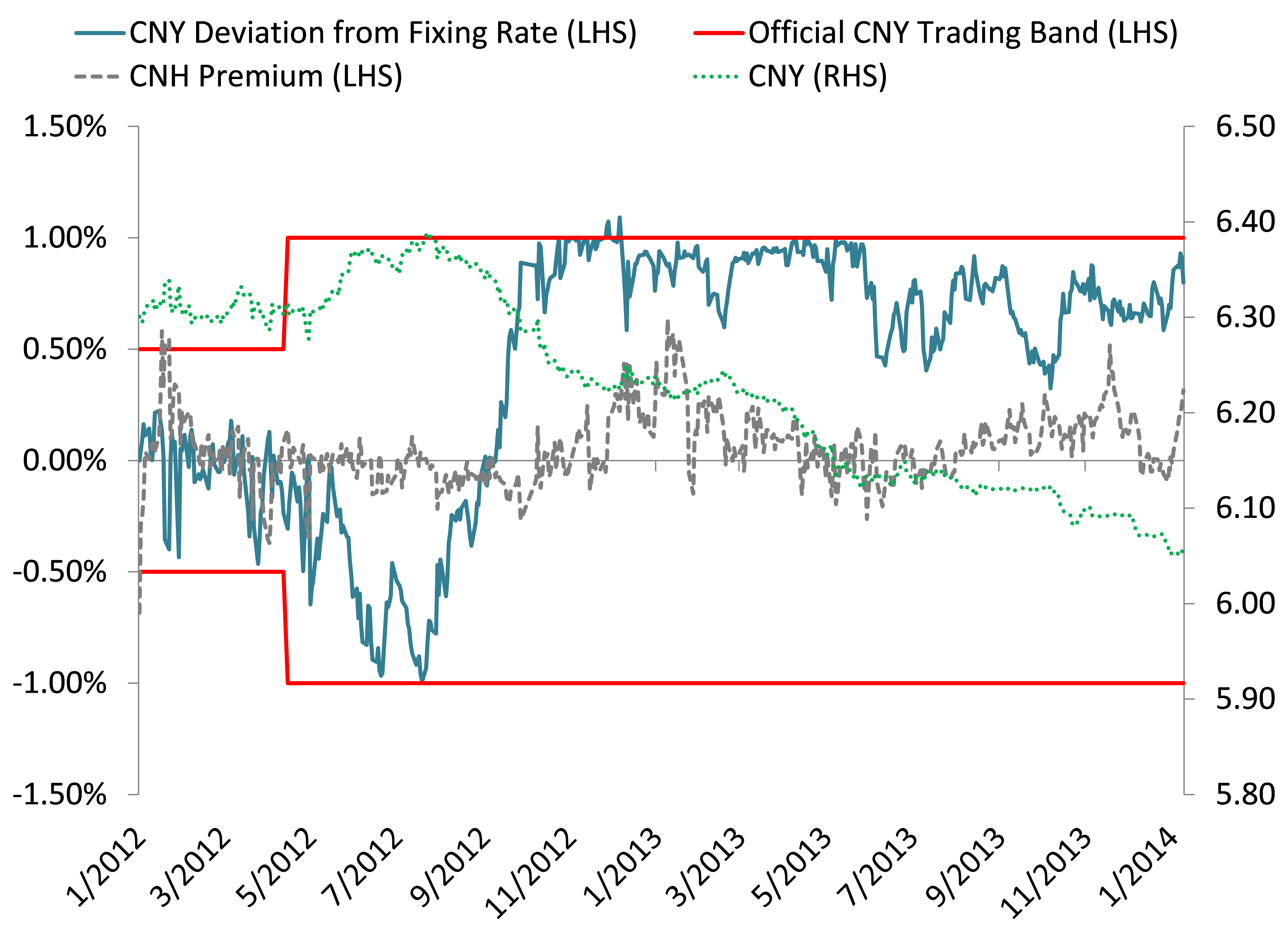 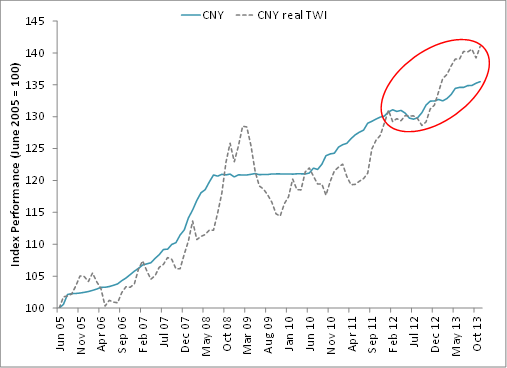 Appreciation pressure can come via two channels: trade and investment, which can work in chorus or in opposition. In 2013, with the developed economies continuing to recover while global rates remaining at low levels (although rising), these two forces have worked in unison. In a an open economy where global interest rates are lower than the local interest rates, foreign capital will flow in. That will push up the value of the currency, and exports will then be less competitive and the trade balance will decline, which creates a balancing force that limits the appreciation. Through its large accumulation of foreign exchange reserves and its tight controls on domestic interest rates, China has prevented its currency from appreciating and its capital from being priced as would have otherwise been dictated by market forces. Going forward, China faces two competing external forces:

1) The unwinding of the Fed’s accommodative monetary will broadly increase rates in the US, pulling capital back from higher yielding emerging markets.

2) A recovering US economy (and to a lesser extent, recovering European and Japanese economies) should lead to greater demand for China’s exports.

The net effect on the renminbi will depend on the relative intensity and speed of those two broad global cyclical forces. Evidence in 2013 suggests that both the trade and investment channels continue to be strong catalysts for appreciation.

In recent months, various high-profile policymakers have spoken at length about the drawbacks of accumulating dollars and assured that the PBoC would “basically” end intervention in the currency market. This year’s remarkable accumulation shows something altogether different. China needs to tolerate more marketization of the renminbi and loosen controls in the domestic financial market. This will almost certainly create some interim volatility as investors, domestic and foreign, reallocate their portfolios and feel through the price discovery process. However, these changes will become more, not less, difficult in the years to come as the imbalances are deepened. And, having not taken advantage of the relatively stable and capital rich environment of the last three or so years, 2014 should present an opportune time to aggressively pursue the reforms to the financial system equivocally laid out at the 3rd Plenum meetings.

China’s leaders have long understood the risks of unwinding their own “non-traditional” monetary policy and the imbalances it has created in the domestic economy (to say nothing of the global economy). If we are to believe the words of China’s new leaders, now they are beginning to fully understand the risks of not unwinding it. Fortunately perhaps, the aforementioned powerful global cyclical tides, combined with complications associated with the sheer magnitudes at which the Chinese economy now operates, will present a formidable challenge to opponents of reform in Zhongnanhai for 2014 and beyond.