State of Play in the Chinese Steel Industry

Steel overcapacity is a global problem and China, the world’s largest steel-producing country, is at the center of the debate over how to deal with it. To complicate matters, China expects to be accorded “market economy status (MES)” in December 2016 as provided in its accession protocol to the World Trade Organization (WTO), which could affect its trading partners’ ability to use trade laws to combat the alleged dumping of steel products.[1] This blog post provides data on the Chinese steel industry to inform public debate on these issues.

China's share of world crude steel production has steadily increased over the past decade. China accounted for 31 percent of world production in 2005; that figure increased to 50 percent in 2015 (table 1). Chinese production more than doubled over this period, accounting for almost all of the 475 million ton increase in global production. China’s average annual growth rate in crude steel production since 2009 was 6.8 percent, lower than its pre-crisis rate of 13.1 percent during 2006–08 but much higher than the average world rate (including China) of just 3 percent since 2009.

Apart from the clear trend of a rapidly expanding Chinese steel sector shown in table 1, a major transformation within the industry over the past decade is worth noting: Private firms are playing a much larger role. According to the China Iron and Steel Association (CISA), private enterprises only accounted for 5 percent of crude steel production in China in 2003. Their share increased to 50.36 percent in 2014.[2] The same situation is true for capacity: In 2014, private firms accounted for over 50 percent of Chinese crude steel capacity. The increasingly large share of production and capacity from private enterprises poses new challenges for implementing Chinese steel capacity cuts in coming years. 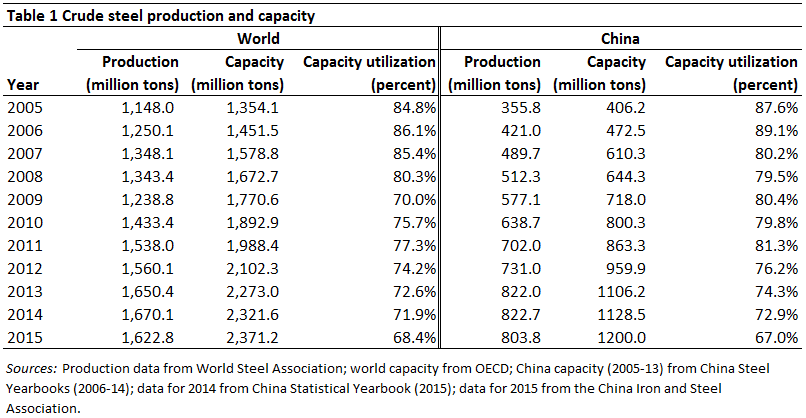 China has substantially increased its steel exports to world markets since 2005 (table 2). While China’s exporting volume more than doubled after 2011, exports to its four major customers—the United States, the European Union, Japan, and Korea—did not rise significantly. Before 2009, these four major economies accounted for roughly 45 percent of global Chinese steel exports. However, by 2015, their share dropped to 23 percent. This sharp decline paralleled expanding exports to low and middle income economies, most notably member states of the Association of Southeast Asian Nations (ASEAN), Africa, the Middle East, and Latin America and the Caribbean. In 2015, ASEAN was the single largest steel market for China, accounting for roughly a third of total Chinese steel exports. Collectively, exporting shares to these four low and middle income regions increased from 35 percent in 2005 to 62 percent in 2015.

To tackle substantial excess capacity further, in February 2016, the State Council announced that China will cut crude steel capacity by 100 million to 150 million tons over the next five years.[4] The Ministry of Human Resources and Social Security estimated that 500,000 employees in the industry will need to be resettled.[5]

In May 2016, the Chinese government announced a more specific short-term plan to cut excess capacity. The government committed to cut coal and steel capacity owned by centrally-administered state-owned enterprises by 10 percent during the 2016 —17 period.[6] Meanwhile, the Ministry of Finance announced that the government will establish a fund of 100 billion renminbi ($15.3 billion) to facilitate capacity cuts. The fund will mainly be used to compensate and retrain laid-off workers. In addition to the 100 billion renminbi fund, the Ministry announced that China will adopt a combination of tax, accounting, and land administration policies to support mergers and acquisitions, debt restructuring, and bankruptcy reorganization in the coal and steel industries, including continuing export tax rebates to steel exporters.[7]

Outlook for the Steel Dispute and MES

The OECD Steel Committee meeting scheduled for September 8–9 will discuss the overcapacity issue, and the G-20 summit in Hangzhou, China, on September 4–5 will likely also address the problem. During previous bilateral and multilateral dialogues on steel overcapacity, Chinese officials acknowledged the existence of excess steel capacity but argued that the slow recovery of the world economy, leading to sluggish demand for steel products, is to blame. In their view, redressing the steel overcapacity problem is a responsibility that all major producing nations should share. But the United States and the European Union argue that excess capacity in China has distorted global steel trade and fostered unfair trade practices.

That is where the MES issue comes in. To protect domestic steel industries from unfair trade, the United States and the European Union have imposed a large number of trade remedy actions against steel imports from China. MES could substantially change how duties against Chinese exporting steel firms are calculated in antidumping cases as it allows importing countries to use prices from other markets instead of non-market prices in China to determine the dumping margin.[8] China argues that its trading partners must grant it MES by December 2016, but the United States and the European Union disagree. As a practical political matter, steel disputes cannot be separated from the MES question. The MES issue is unlikely to be resolved before the December 2016 deadline, and could well lead China to file a WTO dispute against both the US and the EU.

[1] See “The Outlook for Market Economy Status for China” for a detailed explanation on China’s WTO accession protocol.

What Can China Accomplish with its G-20 Presidency?

This is China's 20th anniversary of joining the WTO. What will the 25th look like?