RQFII to the Rescue?

Continuing on last week’s theme of expectations, let’s take a look at ongoing developments in the offshore renminbi market. Despite breathless predictions of continued growth by the investment banks, the offshore market has hit a rough patch and deposits in Hong Kong actually declined in October.

What’s at work here? Well it seems that expectations are once again playing a significant role. Renminbi began to flow in large amounts into Hong Kong after the People’s Bank of China (PBoC) approved renminbi-denominated trade settlement in 2009. The key drivers of these flows were expectations that the renminbi will keep appreciating. With the renminbi expected to appreciate several percent per year over the next couple years, investors and offshore companies were happy to hold offshore renminbi despite the lower interest rates and limited investment opportunities for the currency offshore.

However, many are now convinced that the ongoing crisis in Europe and a moderate slowing of growth in China have brought to a halt the steady appreciation of the renminbi. Whether or not this is true is open to debate, it’s undeniable that this sentiment is widespread and has hurt the offshore market.

The decline in deposits reveals the vulnerability of renminbi internationalization to fluctuations in appreciation expectations. When a steady rise against the dollar is no longer guaranteed, many investors and companies no longer have much interest in holding renminbi.

Amidst the turmoil in the offshore markets, China’s financial authorities have moved forward with several remminbi internationalization initiatives over the past week.

The first is the approval of the Renminbi Qualified Foreign Institutional Investors (RQFII) program. Announced by Vice Premier Li Keqiang during his August visit to Hong Kong, the RQFII program allows approved investors to use offshore renminbi to invest directly in mainland bonds and equities (80 percent and 20 percent respectively).

The second is a report that the China Security Regulatory Commission (CSRC) has sped up the approval of applications for the existing Qualified Foreign Institutional Investor (QFII) program.

The third is a statement by a PBoC official that they will expand the number of enterprises authorized to conduct cross border renminbi trade settlement.

These moves are part of a broader effort to create more two-way flows between the onshore and offshore market and create a sustainable base of support for renminbi internationalization beyond appreciation expectations. We’ll have to wait and see if it’s enough of a jolt to reverse the current decline of offshore renminbi deposits in Hong Kong.

Hopes that RQFII will prove to be an important boost to the offshore market seem to be based more on expectations than reality. The initial amount of the program is relatively small, only 20 billion renminbi. Moreover, the QFII program has not expanded significantly since its creation in 2002, accounting for only about 1 percent of total market value in China. Thus whether the RQFII program will actually be expanded into a significant channel for investment in the future is far from a given.

As for the alarm about declining deposits, it’s good to keep a sense of perspective about these things. The modest decline in deposits in October is vastly overshadowed by the increases that occurred during the rest of the year. 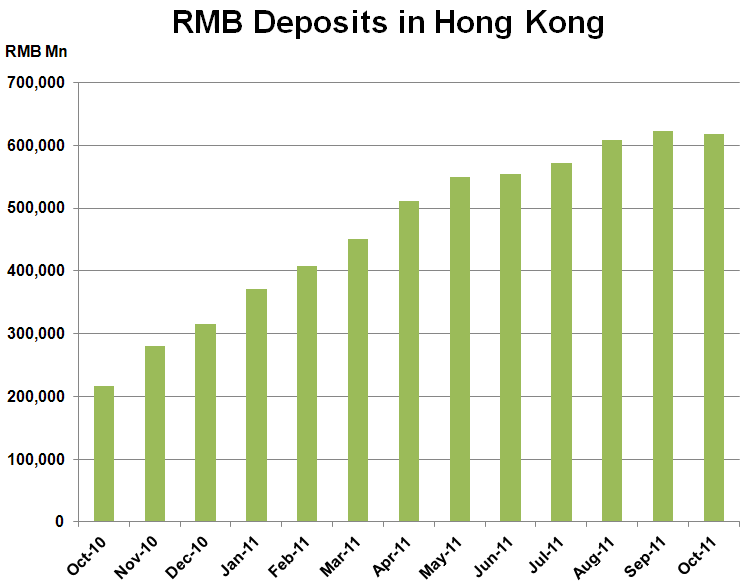 Additionally, although the common wisdom now is that continued appreciation is out of the question, a favorable change in economic circumstances could quickly alter that. In fact, the current round of appreciation is still moving more rapidly than the previous round that began in 2005. 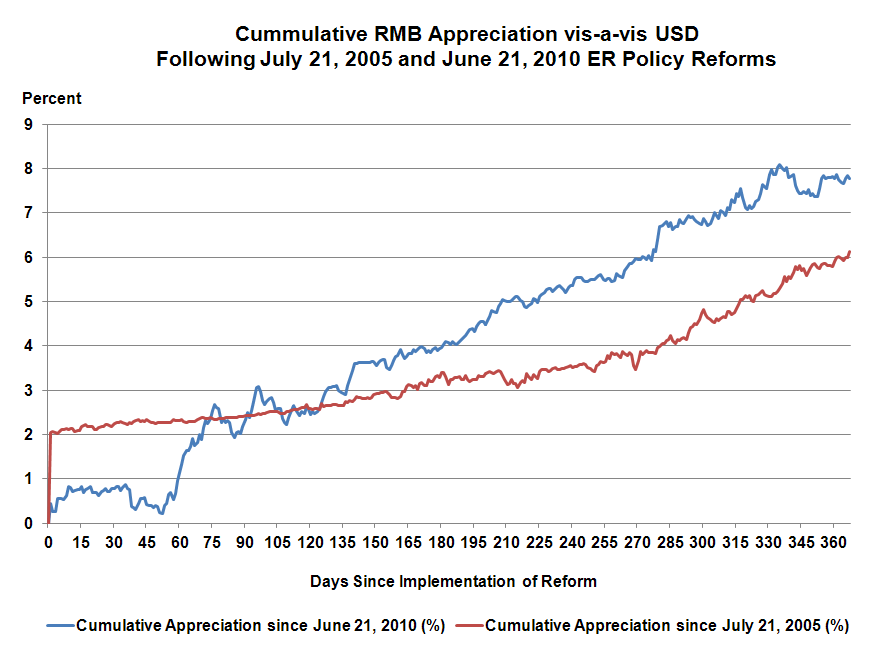