China’s money-losing but politically powerful state-owned enterprises (SOEs) have long been identified as a drag on the Chinese economy. The latest signal of their troubles is the dramatic rise last year in the number of SOE defaults in China’s onshore bond market. The number of defaulted enterprises included several large SOEs, among them Yongcheng Coal and Electricity and Tsinghua Unigroup. News of these defaults has shocked many investors who long believed distressed state firms would be bailed out by the Chinese government.

Bond defaults in China are not new, but they tended to affect mostly private businesses in the past. More than 80 percent of the defaults from 2017 to 2019 struck private firms. But that situation has changed. In 2020, the share of state firms in bond defaults almost matched that of private enterprises, with state firms defaulting on 80 bonds worth RMB98 billion (US$15.17 billion).[1] One factor in the surge in defaults could be that many local governments have been struggling with their own fiscal deficits and thus are unable to bail out local state firms. But Beijing has also been signaling a gradual phaseout of government guarantees on state firm liabilities.

In fact, though the latest defaults have disrupted markets, recognizing the insolvency of these deficit-ridden concerns will ultimately benefit the Chinese economy, as long as the defaults do not spread out of control. Pricing SOE debt in a more reasonable way should force state firms to adhere to harder budget constraints and exercise greater credit discipline. For private and foreign firms in China, more SOE bond defaults will help reduce the unfair advantage that state firms have enjoyed over private firms, paving the way for a more efficient allocation of financial resources over the medium to long run.

In the past, local governments in China would do whatever they could to bail out troubled state firms in order to avoid the pain of layoffs and tax revenue losses. Because of such implicit state guarantees for state firm liabilities, financing costs of many state firms in China’s onshore bond market were kept excessively low, despite their weak fundamentals. State firms also received inflated ratings from domestic credit rating agencies at a time when foreign agencies were still not allowed to rate China’s onshore bonds. Meanwhile, inflated ratings have encouraged moral hazard and led to a debt-laden state sector with tens of thousands of zombie SOEs.

The first corporate bond default in China’s onshore market took place in 2014, when a private solar power firm was unable to deliver full interest payment to its bondholders. Since then, more bond defaults took place. State firm defaults suddenly increased in 2016, and eight of them, mostly in overcapacity sectors, defaulted on 26 bond products worth about RMB20 billion (US$3.1 billion). Some press stories at the time were already forecasting an end to implicit state guarantees. That unfortunately did not happen. SOE bond defaults in the following three years were even below the 2016 level, while defaults on bonds issued by private companies boomed (see figure below). 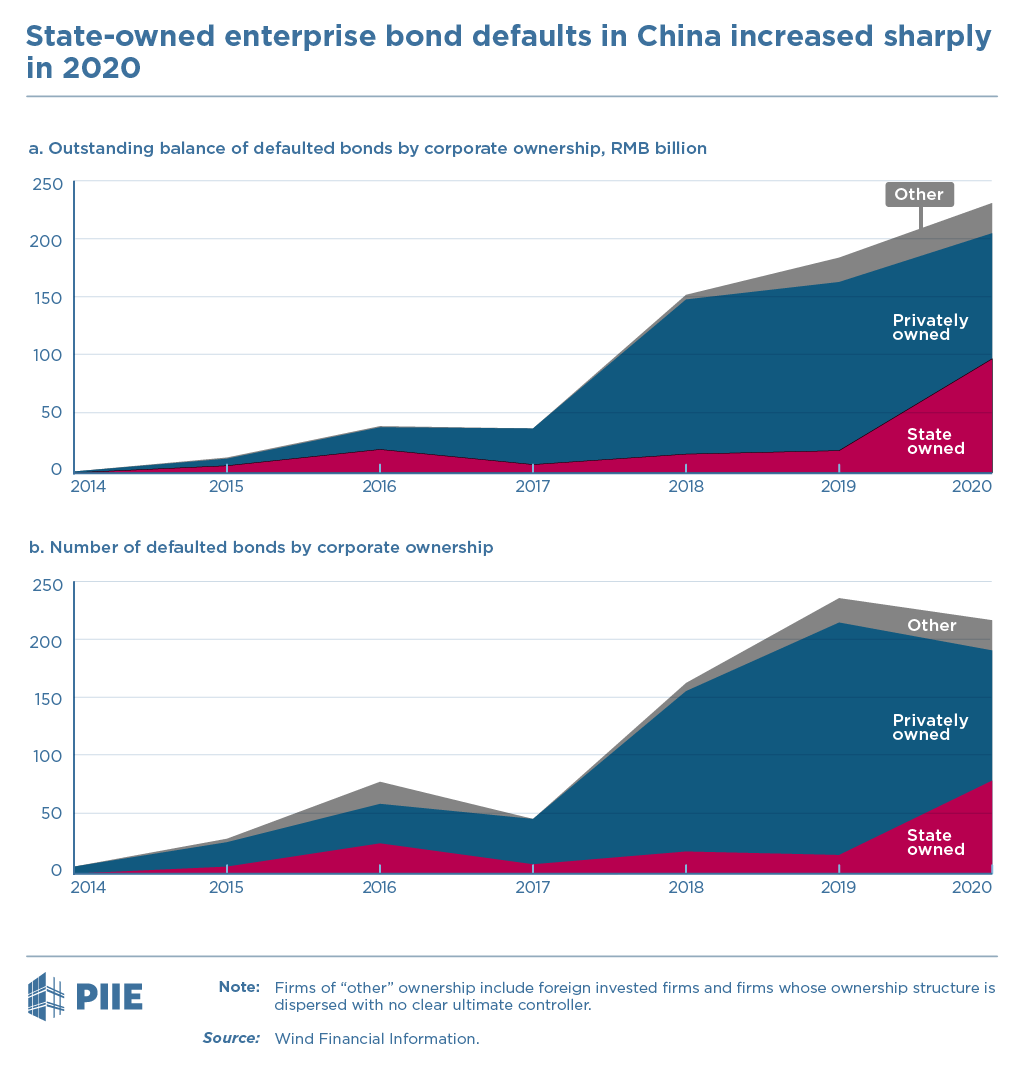 But in 2020, defaulted SOE bonds increased nearly fivefold to RMB98 billion, including a number of high-profile defaults by gigantic state firms, such as Yongcheng Coal and Electricity Holding Group, a local state firm under the jurisdiction of the Henan provincial government, and Tsinghua Unigroup, a renowned semiconductor chipmaker whose ultimate controller is the Ministry of Education, both triple-A rated before their defaults. These two state firms and others like them that defaulted on their bonds already faced profitability and governance problems, even before COVID-19 and the pandemic further worsened their pre-existing vulnerabilities.

The government was reluctant to bail them out as it used to do. On the one hand, governments at all levels in China were facing the worst fiscal stress in more than a decade, tying their hands in saving these state firms. On the other hand, Beijing was attempting to signal to all credit market participants that “too big to fail” no longer holds and that it intended to allow more ill-managed state firms to default on their bonds.

As a result of the string of SOE bond defaults, the interest rates of SOE debts rose quickly in the secondary markets, and many state firms could not issue new bonds without matching these higher rates.

The impacts on foreign investors is negligible. Foreign investors have long viewed ratings provided by China’s domestic credit rating agencies with suspicion, and as a result they hold only a tiny slice of China’s corporate bonds. But this situation may change over the medium to the long run, as more Chinese corporations begin seeking credit ratings from the Big Three international credit rating agencies (Moody’s, Standard & Poor’s, and Fitch), that now have received regulatory approval to run wholly- or majority-owned units in China to rate onshore Chinese bonds. Two domestic rating agencies, including China’s largest one, China Chengxin International Credit Rating, were recently banned by regulators from rating any new bonds in the short term. Hopefully domestic Chinese credit rating agencies will learn a lesson and step up their game in the future. But at least for now, foreign investors will likely continue to remain cautious towards at least Chinese SOE bonds.

The Chinese securities regulator recently reiterated that risks in bond defaults need to be exposed in an orderly manner, suggesting there is now greater tolerance towards SOE bond defaults. But a surge in bond defaults that may end up threatening financial stability also needs to be avoided. This is a sensible approach. Given the Chinese economy is still in recovery mode, and some localities have lately been placed under a new round of lockdowns due to virus outbreaks, letting too many unsound state firms go under all at once will do more harm than good.

But an orderly exposure of risks is easier said than done. Some local governments may still attempt to avoid exposing risks in their ill-managed state sector through bond defaults, which may in turn put greater pressure on their finances. Meanwhile, some investors are concerned that some SOE issuers that are in fact capable of repaying principal and interest on their debt may be purposely evading their debts in the name of marketized default. In response to such concerns, China’s vice premier Liu He stressed that the government had “zero tolerance” towards corporate misbehavior such as debt evasion.

Even if implicit state guarantees in the credit market going forward may no longer be a golden rule, government bailouts will likely continue, especially for companies viewed as strategically important for the national goal of self-reliance in certain cutting-edge technologies.[2] Moreover, implicit guarantee for bank loans will most likely continue to be prevalent. Though China’s corporate bond market is now the second largest in the world, bank credit is still a much larger source of corporate funding than direct financing through bonds and stocks. While the total value of outstanding corporate bonds was nearly RMB26 trillion (US$4.02 trillion) by the end of November 2020, the outstanding corporate loan balance was more than four times that, reaching over RMB107 trillion (US$16.56 trillion) at the same time, according to Wind Information.

1. The exchange rate used to convert renminbi to US dollars in this post is as of January 14, 2021.

2. Undoubtedly, Tsinghua Unigroup is in a strategically important sector in China’s industrial policy, but it did not get bailed out. Some suggest that is because the company’s strategic value is overrated, since it does not produce the most cutting-edge semiconductor chips. Nor does it have the capacity to tackle the technological bottlenecks China is facing in the semiconductor industry. See Kenji Kawase, “Was Tsinghua Unigroup’s bond default a surprise?” Nikkei Asia, December 4, 2020.