This is the first in a series on China’s currency, the renminbi.

China is in the middle of a push to “internationalize” the renminbi, signified by a successful push to add the currency to the special drawing rights (SDR) basket of the International Monetary Fund (IMF).  The international use of China’s currency is rising, although it is still just the fifth most used currency worldwide and represents only around 2.5 percent of global payments, according to the Society for Worldwide Interbank Financial Telecommunication (SWIFT).  China’s currency has been all over the news lately for other reasons, from charges of currency manipulation by US presidential candidates to concerns China will significantly devalue its currency in an attempt to boost exports.  This series of blog posts begins by examining the overall picture of China’s currency, the renminbi (RMB), followed by posts focusing on whether it is overvalued, where China’s exchange rate policy may go, and offshore trading of the renminbi (CNH).

From 1994 to 2005 the value of the renminbi was pegged to the US dollar. By the early 2000s, charges of manipulating its currency began to grow.  In 2005, a soaring bilateral trade surplus with the United States and legislation in the US Congress threatening trade sanctions encouraged the People’s Bank of China (PBoC) to move toward a new foreign exchange policy. At that time, there was widespread agreement that the renminbi was seriously undervalued, leading to cheaper Chinese products in the United States (and elsewhere) and making US products more expensive in China.

The new policy allowed the renminbi to appreciate versus the dollar as the PBoC arbitrarily “fixed” the central parity exchange rate, the starting point for the daily trading of the renminbi to the dollar, and allowed the currency to trade within 0.3 percent of the parity rate (it can now trade within 2 percent of the fixing rate, see figure 1 below).  This began a slow, nearly nine-year appreciation of 26 percent versus the dollar, from 8.27 RMB to 6.10 RMB.  The currency used to trade more freely within the 2 percent range of the fixing rate; however, since the change in the foreign exchange rate policy in August 2015, the closing price has not deviated very far from the fixing rate. 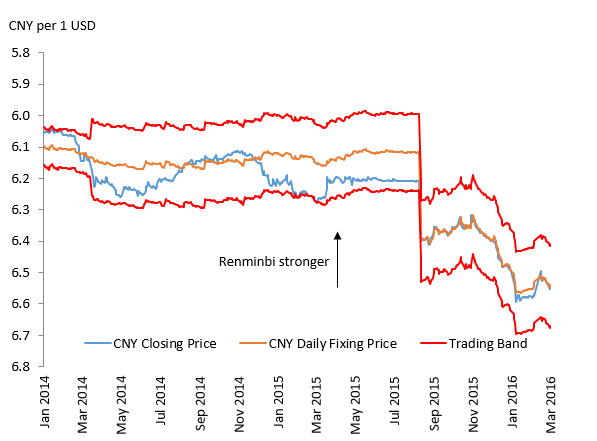 How did China’s central bank manage to keep the currency from appreciating too much? By purchasing and hoarding foreign currencies.  After China’s entry into the WTO in 2001, the country received trillions of dollars of foreign investment, and all those investors wanted to exchange foreign currency into renminbi.  In addition, China had a large annual current account surplus, meaning they were exporting a lot more than they were importing.  These two factors put pressure on the renminbi to appreciate in value.  The PBoC decided to “print” massive amounts of renminbi to purchase the foreign currencies coming into the country, known as intervening in the foreign currency markets.  This is how China’s central bank ended up with $4 trillion worth of foreign exchange reserves.

In 2015, China began to face the opposite problem. Partly because of declining sentiment about the Chinese economy’s health, some investors began to pull money out of the country, converting renminbi into foreign currencies.  Also, China’s current account surplus has shrunk since the highs of the mid-2000s.  These two factors put pressure on the renminbi to depreciate.  So the PBoC began to sell its reserves, to the tune of half a trillion dollars in 2015.  It did this in order to keep the renminbi fromdepreciating too quickly, something welcomed by the US Treasury and others.  But China cannot sell reserves forever.  If capital continues to flow out of China, the PBoC would have more limited powers to stop the currency from falling, possibly leading to a devaluation.  Still, a devaluation appears unlikely at the moment.  Compounding the problems, and adding downward pressure on the renminbi, some speculators try to borrow in renminbi and convert the money into a foreign currency, hoping for a depreciation.  But the PBoC made this more difficult by shrinking the amount of renminbi offshore banks have to lend.

In August of 2015, in light of its campaign to have the renminbi join the SDR basket of the IMF, the PBoC changed its method for setting the daily fixing rate again (the renminbi will enter the SDR basket in October 2016).  The policy change, while initially seen as a possible move to a further serious devaluation, only devalued the currency around 2 percent in one day.  The policy change encompassed three new measures: The PBoC said it will begin taking into account the previous day’s closing exchange rate, the supply and demand conditions of the foreign exchange market, and the exchange rate movements of other major currencies.  Because of the opacity surrounding the central bank’s setting of the “fixing” rate, however, it is difficult to tell whether they are actually abiding by all three rules.

In December 2015, the PBoC announced it will eventually move to manage the exchange rate against a basket of currencies, rather than just the US dollar.  This basket will include the dollar, euro, yen, pound sterling, and a few other currencies.  While this will further loosen the renminbi’s tie to the dollar, it doesn’t exactly make the renminbi’s exchange rate more market-based.  This change has not yet happened, and the PBoC has not indicated when it is likely to make the switch to the basket.

There has been a lot of focus on the renminbi’s bilateral exchange rate with the dollar, which has a huge effect on China’s bilateral trade relationship with the United States. However, the renminbi’s exchange rate versus its main trading partners is actually of greater importance.  The Financial Times’ front-page announcement that China’s “currency nears 5-year low” was somewhat misleading.[1]  Yes, in January 2016 the renminbi had not been that weak versus the dollar in five years, but it had only depreciated around 7 percent from the dollar since its all-time strongest point in early 2014.  The value of the renminbi looks much different when viewed against the currencies of its trading partners, a measure known as the nominal effective exchange rate (NEER).  In the past five years, China’s currency in NEER (or trade-weighted) terms has actually appreciated around 25 percent and is currently near its strongest level ever.

Figure 2 Renminbi exchange rate to US dollar and trade-weighted 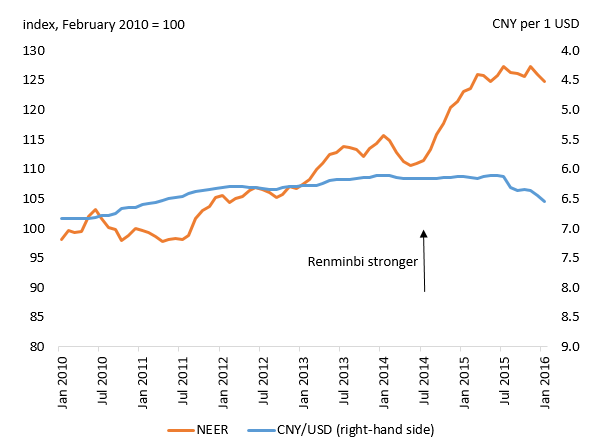