As a percent of GDP, China’s current account in 2015 was the largest since 2010 at 2.72 percent. In dollar terms, the current account was a record $293 billion, mainly due to a swelling trade surplus of 3.42 percent of GDP (figure 1). This surplus was widely expected, as China’s total imports dropped 10 percent for the year, partly due to falling import prices, while exports grew just 1.5 percent, partly due to the renminbi appreciating 8 percent in 2015 on a trade-weighted basis. Net income and net transfers, the other two components of the current account, were little changed from the previous year. 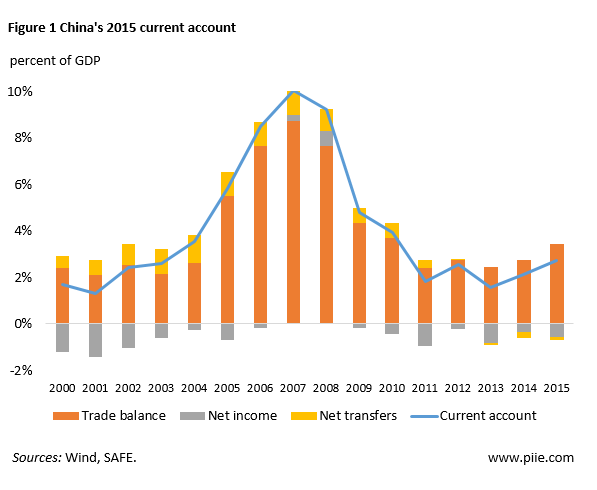 Although it did shrink from 2014, the services trade remained in a deficit mainly because of increasing overseas consumption in tourism. Chinese tourists spent a record $250 billion in 2015 (recorded as services trade), another effect of the relatively strong renminbi (figure 2). China has been implementing new policies in order to increase trade in services, in line with their economic transition. These policies appear to have had some effect: Exports of services increased around $100 billion to $288 billion in 2015, mainly as a result of increased exports of software and other information services, telecoms, and business services. To keep up this momentum, China should push harder to join the negotiations of the Trade in Service Agreement (TiSA), although the United States appears to be blocking its entrance. 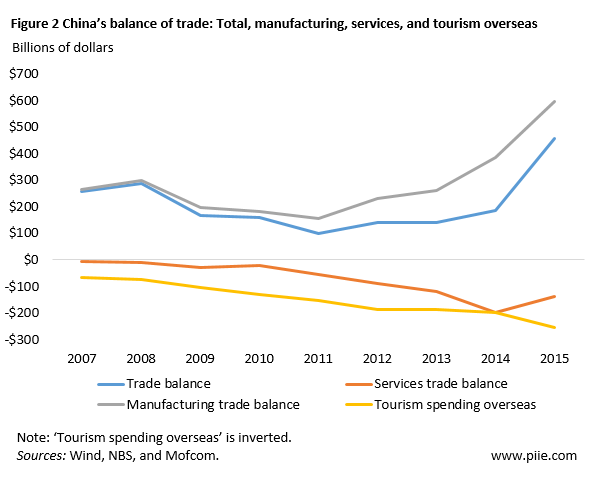 China’s capital and financial account deficit in 2015 was $161 billion, double the previous year (table 1). Errors and omissions were -$132 billion for the year, although these are preliminary numbers and likely to be revised, as fourth quarter data for errors and omissions is not broken out in the preliminary report. China’s consistently high current account surplus may mean its impact on global growth is smaller than the global economy’s impact on China. Normally, a nation with a rising current account surplus would see pressure for its currency to appreciate; however, China is now seeing depreciative pressures, mainly stemming from large capital outflows.

What does this mean for China’s foreign exchange reserves? Its current account surplus of nearly $300 billion gives China some breathing space from its rapidly depleting reserves, which fell by $100 billion in January to $3.23 trillion. Even at this pace, it would appear China has enough reserves to last for a considerable amount of time. 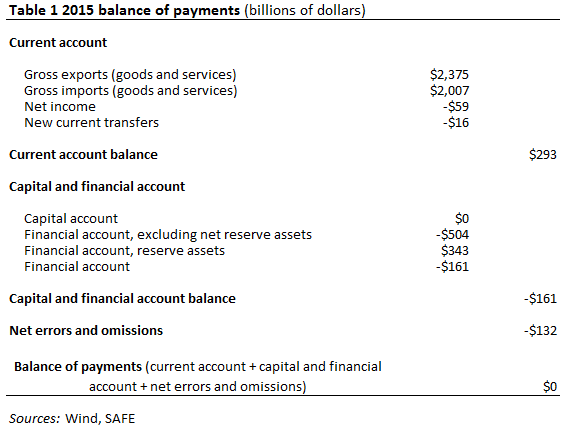 [1] US Bureau of Economic Analysis.  This data might be overstated: When measured in value-added, the OECD showed that in 2009 the US deficit might have been one-third less.

Don't Get Distracted by the Trade Deficit With China

Currency Wars, the Economy of the United States, and Reform of the International Monetary System

Taxing China's Assets: How to Increase US Employment Without Launching a Trade War