The role of Pakistan in China’s large-scale One Belt One Road (OBOR) infrastructure push provides a clear illustration of the logistical and security challenges facing the project.

In April of 2015, China’s President Xi Jinping visited Pakistan and signed the China-Pakistan Economic Corridor (CPEC) Framework Agreement, one of the hallmarks of OBOR, or Belt and Road Initiative (see our report on this initiative, here).  Since, China has been pouring money into Pakistan, with more than $44 billion to be invested there relating OBOR.  Politically, China has a lot riding on Pakistan’s success, the nation is one of China’s strongest allies, and Pakistan borders one of China’s most restive and underdeveloped regions, Xinjiang.  But investing such large sums of capital into a single country can carry serious risks.

CPEC is a microcosm of China’s efforts throughout its OBOR initiative in more than 60 countries.  Part economic development and part geostrategic, CPEC hopes to bind China’s and Pakistan’s economies further, help ease some pressure on Pakistan’s economic and security situation, and secure alternate access routes for natural resources.  For Pakistan’s Prime Minister, Nawaz Sharif, this is a very fruitful relationship, with a number of “early harvest” projects due to be finished in time for the next election in March 2018 – and many of the projects being built in his native Punjab.  In fact, some in Pakistan are calling it the China-Punjab Economic Corridor.  This would not be anything new, as this study of Chinese foreign aid to Africa shows: African political leaders’ birth regions received substantially larger financial flows from China than other regions.

Due to the venerability of building infrastructure in remote regions of Pakistan, Sharif is not taking the safety of CPEC projects lightly, having created a “special security division for Pak-China economic projects,” with more than 15,000 army and civil forces.  With good reason – CPEC can help lift Pakistan’s economy, at a time when growth prospects aren’t so bright.  The hope is that the scale of all this investment will help facilitate increased trade, lower unemployment, and increase economic development.

Pakistan’s infrastructure is poor, including frequent power shortages and a number of badly maintained roads, so the Chinese are filling in a sizeable gap in financing and construction. Of the $44 billion, up to $35 billion is set for energy related projects.  One of the first projects to begin construction is a hydropower dam in the Rawalpindi district of Punjab, which is expected to be completed in 2020 by the same Chinese firm that built the Three Gorges Dam.

China is also planning to enlarge Gwadar port in Balochistan province, having secured the land rights to the port and surrounding areas until 2058.  The main objective of building up Gwadar is to connect it by highway and rail to Southwest China, giving China a way to bypass the Strait of Malacca, a major choke point for natural resources coming from the Middle East to East Asia.  China Overseas Port Holding Co Ltd has plans to make the area a free trade zone, and build an airport as well as a fully operational port. The latter will have two oil terminals and a floating liquefied natural gas terminal with gas pipelines eventually expanding to Lahore.

In Karachi, the Chinese have been approved to build two nuclear power plants.  ZTE Energy has constructed a solar power plant in the city of Bahawalpur, and HydroChina is building wind power projects.  The Diplomat estimated energy projects tied to CPEC might eventually produce 16,400 megawatts of power, more than triple the 4,500 megawatts of power shortfall in Pakistan’s electricity production, supposedly to meet the future needs of a rapidly rising industry stemming from CPEC.  A large share of the new energy production, however, will come from coal fired plants. 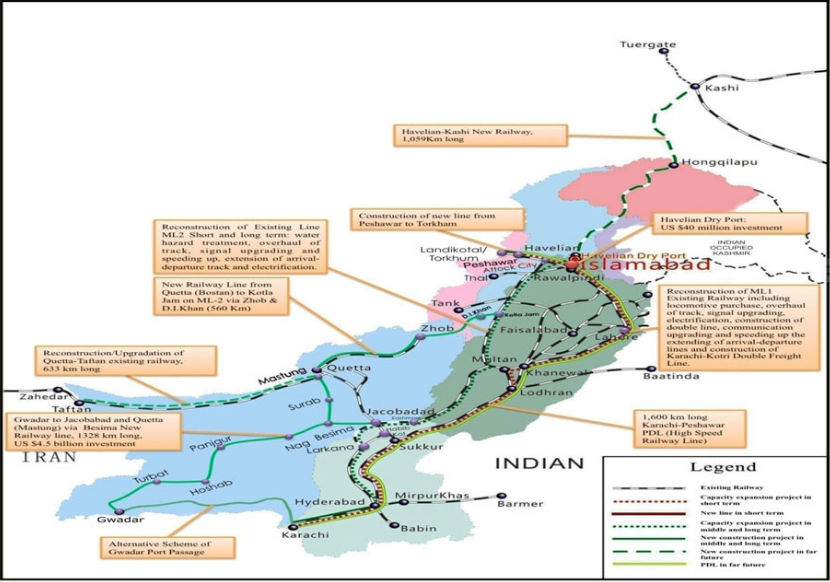 The plans for highway construction and upgrades are extensive, the bulk of which are to connect Lahore and Karachi with at least a four lane highway, another highway extending from Gwadar to Islamabad along the western part of the country, and a third through the unforgiving Karakoram mountains, connecting to Kashgar in China’s Xinjiang province.  A massive rail project to upgrade Pakistan’s Main Line 1 rail, stretching from Karachi in the south to Peshawar in the north was also recently approved (in total the railroad stretches more than 1,000 miles), with the vast majority of the $8 billion in financing coming from China.

This month the International Monetary Fund’s published its final review report for its three-year loan to Pakistan, and it touched on CPEC and sounded the alarm for a few reasons.  The report noted that CPEC related imports (machinery and natural resources) could be so large as to push the current account deficit to 1.5 percent of Gross Domestic Product next year.  Investment would likely boost growth in the short-term but medium-to-long term issues like increasing capital outflows “could arise from CPEC-related repayment obligations and profit repatriation,” the report also noted.

Indeed, China is taking a significant amount of risk, given a recent precedent for non- or late--payment of debt by certain countries. China has lent and invested even more capital in unstable Venezuela, around $65 billion in total, mainly through policy banks.  Venezuela has had to renegotiate its debt, forgoing payments on the principal temporarily.  China thought its investments were safe since Venezuela could always repay in crude oil, of which it has the world’s highest reserves. But with the price of crude having stabilized at much lower levels and the country in total disarray, Venezuela’s government looks increasingly likely to default on its international debt.  This could lead to the seizure of its overseas oil assets, further decreasing oil production, and putting repayment in peril.

Further, China risks upsetting India with CPEC for several reasons, the most prominent being that some infrastructure projects will run through Pakistan-controlled Kashmir, land India claims as its own.  Moreover, CPEC’s upgrades of the Gwadar port have created fears the facilities may one day be used to service the Chinese navy.  For these reasons, India could try to place roadblocks in CPEC’s path.

Clearly, the China-Pakistan alliance is growing even stronger through CPEC and increasing trade and investment between the two countries, though the project entails both reward and risk.  In the short-term CPEC will lead to notable benefits like markedly fewer power outages and increased employment. Over the longer-term, issues related to project financing suggest CPEC faces a rockier road to the shared prosperity that is commonly acknowledged.