Xi Jinping’s recent visit to Seoul was remarkable for a number of reasons. It was the first in which a Chinese president visited the South before the North, no doubt a thread which the Kim regime took note. It also highlighted both leaders’ distaste and distrust for neighboring Japan. But, perhaps most importantly, it reinforced the strong economic relationship between China and South Korea.  Indeed, there are few countries in the world that have benefited more from China’s economic transformation than the ROK. China has been South Korea’s largest trading partner for years, and both countries are seeing myriad possibilities for deeper economic and financial ties, including the possible conclusion of their bilateral FTA this year.

In this post, we will try to quantify China’s present commercial relationship with Korea and lay out areas in which the two countries are forming closer ties in the face of a complex geopolitical environment. In many ways, South Korea’s drift further towards China’s economic center of gravity is a very real prospect and perhaps inevitable. However, the diplomatic tea leaves are much harder to read: general South Korean public sentiment towards China is warming, but remains discomforted by the increasing dependence on a partner that does not consider their country’s interest, supports the North Korean regime, and engages in less-than-benign territorial disputes with neighboring countries.

Bilateral trade between China and South Korea has increased markedly over the past decade. Since the early 2000’s China has been South Korea’s top partner in total merchandise trade, commanding a sizeable advantage over other major countries (Exhibit 1). In 2013, South Korea’s total trade with China – $83 billion in imports and $146 billion in exports – was more than its total combined trade with the United States and Japan. 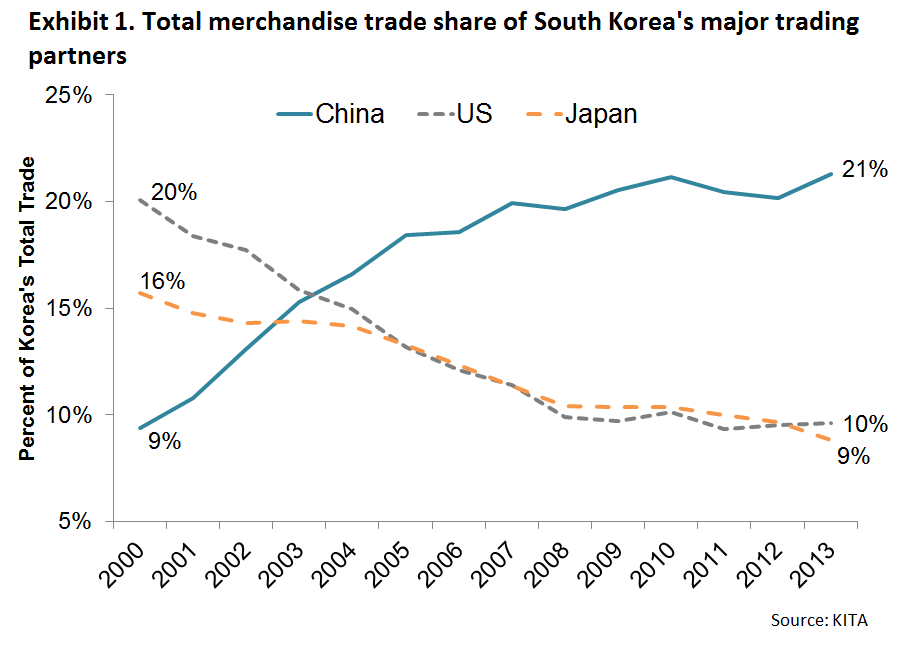 Of course, the above picture is muddled by the fact that China and South Korea trade in a comparatively large amount of re-exported/imported intermediate products which are subject to double-counting. If we compare trade in value added goods, a statistical technique designed to strip out the intermediate inputs that are imported from other countries, South Korea’s trade relationships look somewhat different. As of 2009, ROK-US trade still appeared more important than that with China in purely value-creation terms according to the OECD-WTO (Exhibit 2). However, this is changing: value added trade between China-ROK expanded noticeably over the 2005 – 2009 period observed, while that with Japan and the United States remained static or declined. With a few years since release of the latest figures, it is not hard to surmise that further gains may already rival US-ROK levels. 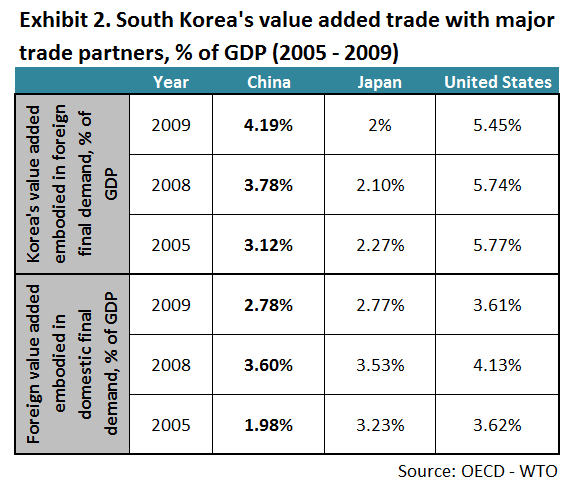 China’s position as Korea’s largest trading partner is especially significant considering that international trade is an integral driver of the South Korean economy – exports accounted for more than half of the country’s growth in 2013. Total merchandise trade as a percent of GDP has risen from 52% in 2000 to 95% in 2012; out of 202 counties that the World Bank lists, Korea is in the top 20 percent in terms of this rough measure of trade penetration. Moreover, trade – and by extension China – could become even more integral to South Korea’s future growth if export gains continue to outpace that of Korea’s still-sluggish domestic consumption.

But there is more to economic integration than simply lobbing goods back and forth over the Bohai. Complex supply chains, service and financial needs, and infrastructure to facilitate this trade must exist – all of which require significant investment. As shown in exhibit 3, South Korea’s total asset holdings in China are comparatively large, with a direct foreign investment position of $55 billion in 2013 (compare this to its $38.7 billion position in the United States). From China’s perspective, this is about 7 percent of its total inward FDI stock (excluding Hong Kong) according to the latest data from UNCTAD, roughly similar to that of Singapore and Taiwan. However, Chinese investment, both in foreign direct and financial assets, in South Korea is much smaller than the US, the EU, or Japan. This is perhaps not surprising as China’s financial sector remains insular, and that Chinese companies have only recently begun to expand overseas and engage in large-scale foreign direct investment. 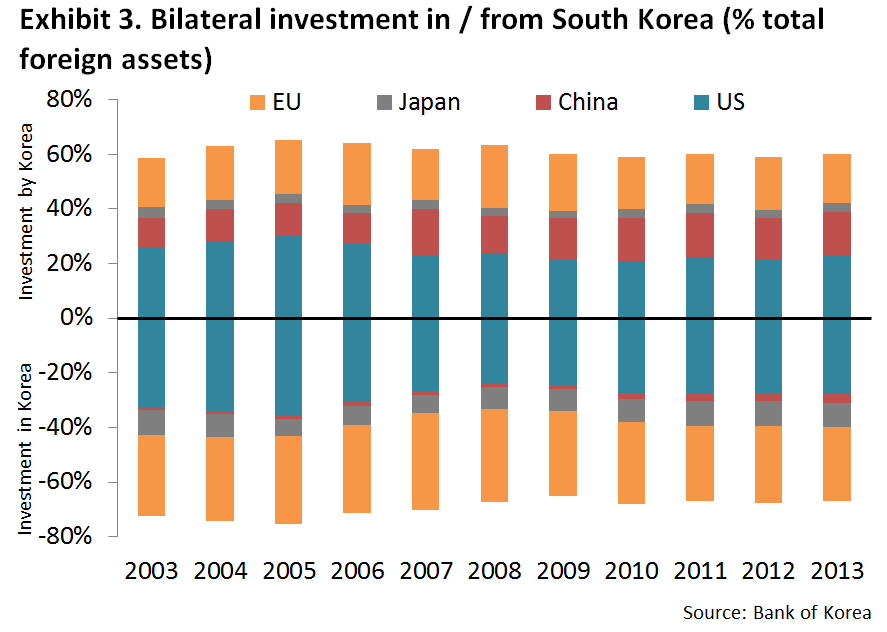 However, bilateral financial integration could take solid steps forward given recent developments. Seoul is preparing to join only a handful of nations in receiving a Renminbi clearing bank, which will facilitate the use of RMB in bilateral trade and encourage issuance of RMB-denominated securities. Moreover, Korea’s RQFII quota has also been expanded to 80 billion yuan, similar to quotas for the UK and France.  Taken together, these developments could prompt an expansion in yuan-denominated transactions by South Koreans, especially as it comes from an extremely small base: in 2013 less than 0.5 percent of Korea’s total trade was settled in RMB, as opposed to 85 percent in US dollars. And, considering China runs a significant trade deficit with South Korea, excess accumulated RMB could then be invested locally in potentially higher-yielding RMB-denominated assets, thus allowing Korean firms to partially eliminate FX exposures. From China’s perspective, developing financial infrastructure now not only facilitates trade expansion and hedges exchange risks, but prepares South Korea as a prime investment destination for its pent-up capital as Beijing gradually loosens restrictions on its domestic residents’ international investment portfolios.

In the background of continued economic integration, the South Korean public holds a complex and cautious outlook on their powerful neighbor.  According to Pew’s Global Attitudes project, which dedicates an entire section to gauging cross-country sentiment towards China, the South Korean public appears guardedly agnostic in certain broad respects: while a little over half of respondents reported generally favorable views of China (Exhibit 4), other areas elicit strongly negative responses, particularly towards China’s military rise and its perceived non-consideration of South Korea’s interests. 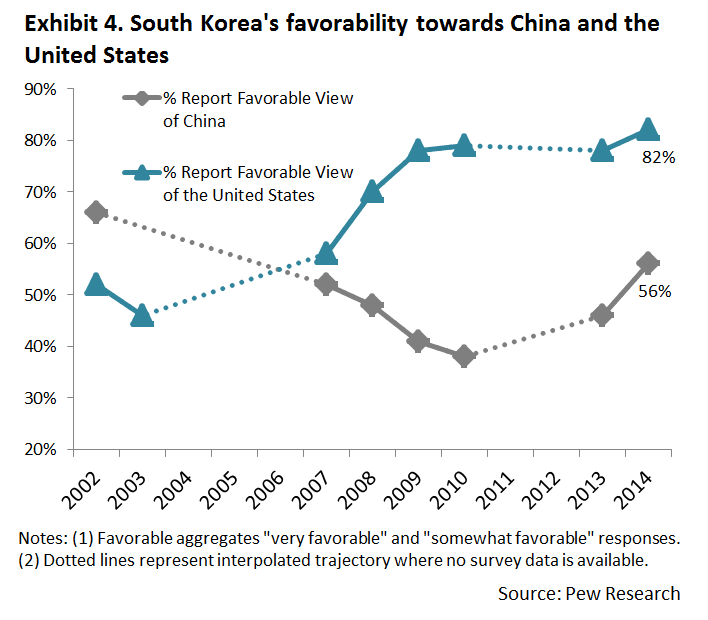 Yet, even taking the cautious public attitudes into consideration, a continued warming of China-ROK ties is likely to continue in the short term. Pew reports a large jump in positive sentiment towards China in its latest poll, The Asan Institute sees general favorability for current Chinese leader Xi Jinping, and a February 2014 poll by TNS Korea shows that public assessments of Korea-China relations have markedly improved in the first year of Park Gyeun Hye’s presidency.

When one looks under the hood, China and South Korea’s economic integration is perhaps not quite as deep as the headline trade figures would suggest. Particularly Chinese investment in Korea, bilateral financial portfolio holdings, and currency-settlement infrastructure are coming from a low base, with considerable room to grow. Moreover, many landmines may lay ahead on the diplomatic front. South Koreans still perceive China as an ardent supporter of the North Korean regime and worry about its handling of territorial disputes in shared waters. And given Korea’s size, openness, and reliance on foreign trade for growth, public anxiety regarding Beijing’s increasing power and its potential ability to influence South Korean national policy by utilizing its economic leverage may grow. While not entirely comparable, South Korean policymakers are surely taking heed of recent developments in this regard in Taiwan and Hong Kong.

Nonetheless, the recent flowering of bilateral goodwill has allowed China and South Korea to pursue a number of steady, mutually beneficial improvements to trade and financial infrastructure. The China-South Korea FTA has been in negotiation for years and is certainly not a done deal, but seems more likely to succeed given a Xi-Park joint statement calling to finish talks within the year along with reports of significant progress even before this latest negotiation round. Xi has set a bilateral trade target of $300 billion by 2015, which is a little under a quarter of the ROKs total GDP last year. While anxiety over increasing economic dependence andthe desire to balance China’s influence with that of the United States will present more difficult decisions ahead for Korean policymakers,for now both countries appear content to let the good times roll.

[This post has been adapted and updated from a two-part series on the blog North Korea: Witness to Transformation (Part 1 , Part 2)]

A Sino-Russian Rivalry over North Korea?