It has become commonplace to discuss the China’s local government debt crisis and wasteful infrastructure spending. While there are problems in the way local governments are financing and spending money in China, they do not herald an immediate crisis. The feeling of immediate crisis is fueled by several misconceptions listed below. These misconceptions serve only to distract attention away from the more important debate over the reforms necessary to improve the efficiency of local fiscal resources allocation.

1. Local infrastructure investment is only financed by debt 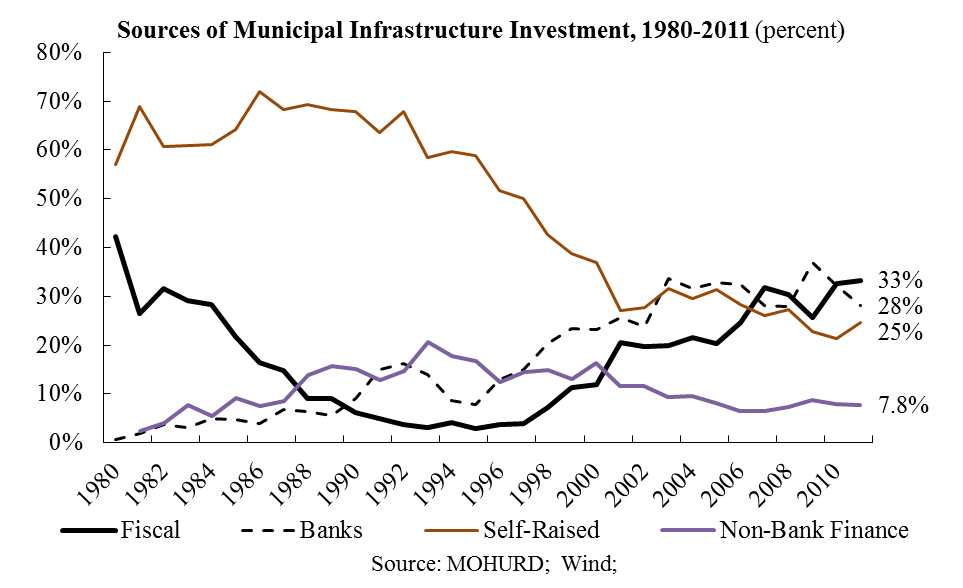 2. Debt financing for local infrastructure is a problem

Another common misconception is that using debt to finance infrastructure is a problem. In fact debt financing for infrastructure is commonplace. Debt is an important vehicle for matching the short term cost of infrastructure with the long term benefits. The United States has one of the largest municipal debt markets in the world. Outside of the U.S, many countries borrow from banks to support local governments. A study by the World Bank on Managing Subnational Credit and Default risks suggests a “competitive and diversified subnational credit market” is an optimal direction for developing markets.

3. China has too many “white elephants”

It is widely believed that most of infrastructure investments in recent years – particularly those during the 2009 stimulus program – have been “white elephants.” Although it is true that many infrastructure projects - subway systems – do not generate profits and would struggle to pay back the principal on loans without fiscal injection that does not mean that these funds were wasted. Many infrastructure projects will provide positive externalities to the Chinese economy in the long run. 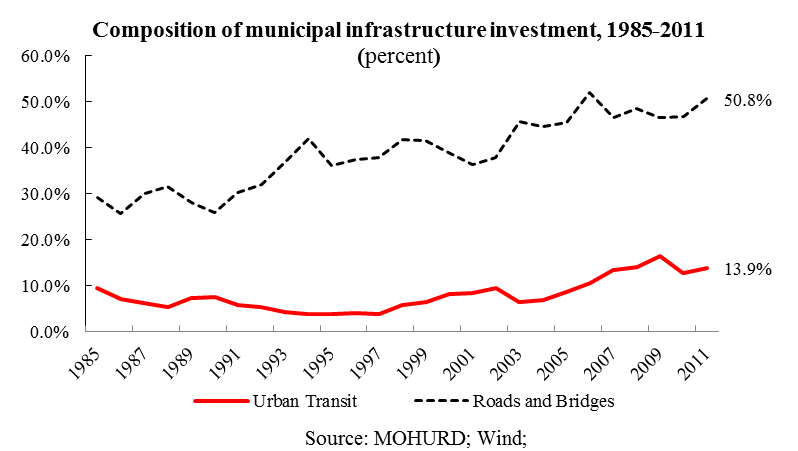 Most infrastructures spending at the municipal level goes toward urban transit, roads, and bridges. The largest increases in municipal investment in the 2009 stimulus came in urban transit – particularly subway systems. The OECD China survey of 2013 included a comprehensive analysis of rail transport systems in China. The survey found that the average daily commuting times in Beijing and Shanghai were almost double the OECD average. They suggest that the development of high-volume urban transport systems have not kept pace with city growth. The study also found that the density of municipal rail transport (meters/ kilometers squared) and availability (km/million people) in all Chinese cities were well below that of many cities outside China like Hong Kong, London, or New York. For example even Shanghai only had a rail transport density of 130.3 meters per kilometers squared compared with 407 meters per kilometers squared in Tokyo.

More important the benefits such transportation systems bring to an economy are not fully realized in traditional measures of returns. Recent economic literature has shown that increasing the size of a city’s economy and its accessibility to other regions (or its “economic mass”) can increase productivity.  Recently a study by the World Bank estimated that the high speed railway investment in China will increase productivity by at least 5.3 percent. Other measures to increase economic mass – including improving urban transit systems – would also yield productivity gains to major urban centers.

The results of the current local government audit in China are unlikely to change this picture. UBS estimates show that China's local government debt (including township level) may have reached 32 percent of GDP in 2012. This would keep China in line with developed markets but would make China more of an outlier compared to emerging markets like Turkey, India, and Brazil.Yet unlike these emerging markets, China is a net creditor in global capital markets and has much lower levels of central government debt. This ensures that the central government could resolve any cash flow problems at the provincial level.

This is not to say there are not serious unresolved problems in local government finances in China or that there is no overcapacity in infrastructure investment. The rapid expansion of local government-affiliated infrastructure debt and widespread maturity mismatches were ill advised. They have complicated structural reforms by putting significant pressure on China’s capital markets and fiscal resources at a time of slowing growth.

However, the problems are more nuanced. Reforms should be focused on improving the efficiency of local government investment and borrowing rather than blanket curbs on local government investments or activities in capital markets. China still has room for investment to support growing urban cities, and it will need to borrow from capital markets and perhaps even increase current debt levels to finish projects. The critical factor is developing a better framework to ensure these investments are providing a measurable benefit to the locality and the broader Chinese economy.