Are falling stock prices in China a sign of deeper economic frictions? Is a drag on the real economy inevitable? As Paul Samuelson said, “The stock market has predicted nine out of the last five recessions”—meaning that observers who are guided by the movements of the stock market alone will be spooked more often than warranted by the true state of the economy.

In China, the growth of stock prices has traditionally exhibited a limited correlation with the growth of the overall economy.  China’s stock market performance over the last 17 years has only seen significant rises in 2007 (with a subsequent fall) and in the last year, while GDP growth during this time typically hovered between 7 and 12 percent.  The correlation between recent stock price movements and GDP growth in China is positive but small.

In fact, in half of the emerging markets studied by Mauro (2003), the statistical association between past stock returns and contemporaneous growth was so small that it might as well have been zero. One case where the relationship was significant and which might have some similarities with the Chinese case was South Korea: a decrease in stock returns by 10 percentage points was associated with slower growth by 0.78 percentage points.

Replicating Mauro’s exercise for China, we obtain a smaller coefficient. Historical data are an imperfect guide for the future, but based on the observations from nearly two decades, we can say that the empirical relationship contains a lot of noise. Based on the coefficient for China (shown in the table below) a 30 percentage point fall in stock prices would be associated with 1.14 percentage point slower growth (0.038*-30=-1.14).

The widely scattered data points for GDP growth on lagged changes in the Shanghai Composite index also suggest that the financial market and the real economy were not closely linked in the past (figure 1). 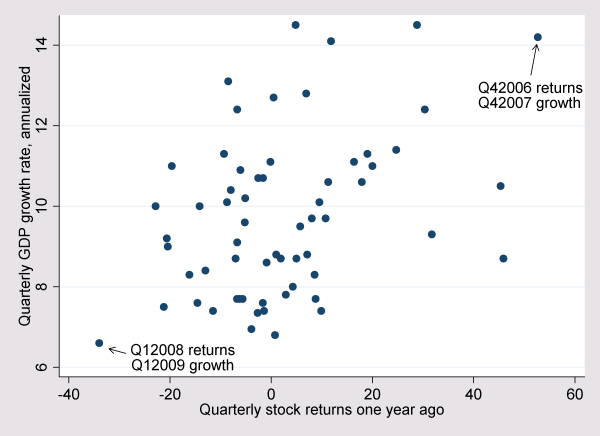 Are Households Holding Too Many Stocks?

A key concern is that aggregate demand could fall due to “wealth effects.” Consumption is typically understood to be determined not only by current income but also by the total value of consumers’ assets. One way to trace a possible connection of the stock market with the real economy is to examine the proportion of assets that households allocate to equities. At the end of 2014, Chinese households held on average 10 percent of their assets in stocks, and out of 350 million households, a maximum of 30 million to 35 million have exposure to the stock market.[1]  Given that household final consumption is around 37 percent of China’s GDP, and the fact that the exposure of Chinese households to equities is (on average) still limited, even a 30 percent drop from recent highs in the stock market will not affect the average household very much, as the majority of their assets are in cash or property.

That said, three caveats must be noted. First, the 2008 stock market crash, which had little effect on household consumption, ought not to be seen as a clear template or a precedent (the financial market has evolved a lot in the last seven years). Second, even if the impact on household wealth is small on average, the distribution of exposure also matters (some number of households will lose all their wealth). Third, asset price shocks can lead households to adjust down their expectations of future income and wealth. Depending on the magnitude of these revised beliefs, households could choose to save more, contrary to the long-term objectives of Chinese policymakers.

Impact on the Domestic Economy

There are other reasons why the recent market downturn should not be cause for alarm for most people.  Market capitalization as a share of GDP reached 90 percent; by comparison it reached 120 percent at the height of the 2007 market rise (see figure 2).  That subsequent crash had no real effect on the real economy in China. 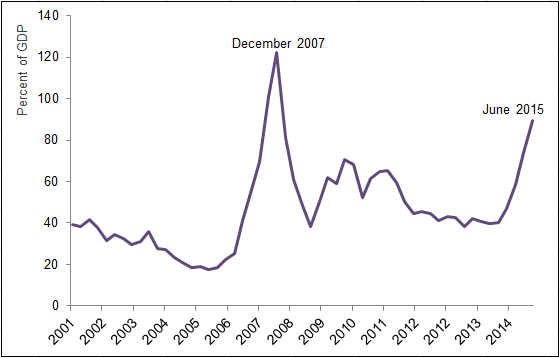 Gross capital formation, a measure of investment in the economy, is around 48 percent of China’s GDP. There are fewer than 3,000 companies listed on China’s two main equity boards in Shanghai and Shenzhen. A large drop in the valuations of these firms could have a couple of marginal effects. It could reduce the firms’ near-term outlook and therefore cause them to purchase less equipment or property. It could also reduce their ability to borrow against the reduced equity and consequently invest less.

Other areas of the economy are also unlikely to be affected. The property market has stabilized and is showing signs of improvement in certain areas. And just as economists have pointed out that the sluggish property market served as a justification for some Chinese investors to take their money out of real estate and into equities, a falling stock market could shift money back into the property market. Industrial production and profits have edged up lately, which could be good for the stock market in the long run.  The financial sector contribution to GDP was 8 percent last year, so this sector should not take a big hit.  The stocks of the top eight banks by market cap are up over the last 60 days, most over 10 percent; also profits from fees on trading have been high.  Exposure to margin lending is limited at around RMB 2 trillion, compared to overall lending exposure for the banking sector of RMB 90 trillion.  Liquidity has also remained strong.

But the more nuanced look at the effect of the crash is on sentiment about the economy and confidence in the authorities. Chinese investors, maybe more than others, respond more to official incentives on how to invest, perhaps because of the dearth of alternatives and the strength of the incentives themselves.  The government has encouraged people to purchase stocks, thereby pushing valuations higher. It accomplished this though messages in communist party newspapers, encouraging people to open accounts at state-owned brokers, and by allowing margin investing to rise to unprecedented heights.  As valuations went ever higher, the authorities showed little inclination to put on the brakes. This reaction is in direct contrast to the cooling regulations the government implemented when property market prices increased sharply, such as making purchasers of second homes in certain markets put down deposits of up to 60 percent.  One reason for the much stronger regulation that occurred in the property market is that it is fundamental to China’s real economy.

When the stock market turned, it appears that the government was already “all in.”  They know their reputation is on the line and have thrown the kitchen sink and more at the problem.

Government authorities also know that the stock market crash could have implications for China’s ambitions to get the renminbi included in the IMF’s special drawing rights basket. They also understand that there might not be a big threat to the overall economy with the crash, but confidence in the government could take a hit and cause ripple effects throughout the slowing economy.  If more negative indicators pile up, then investors and households could reduce their investments and consumption at faster rates than they would have without the crash.  This is the dilemma the authorities in China currently face—it should come as no surprise that they have seemingly stopped at nothing to stop the flood.

[1] While some reports speak of 60 million or more trading accounts, most of these are multiple accounts for single households.