A major source of friction in the economic negotiations between the United States and China is the accusation by the US government that US firms that want to do business in China are forced into joint venture arrangements in which they must surrender access to their advanced technology. This charge has echoed through many official statements and reports, and the Trump administration has cited the issue many times as part of its agenda with the Chinese leadership.

The problem certainly does exist, most experts agree. But the data suggest that its magnitude has diminished over time. Instead of launching a broadside implying that all foreign direct investment (FDI) into China involves forced technology transfer, the United States Trade Representative (USTR), Robert Lighthizer—who is now in charge of the US-China trade dialogue—should acknowledge the problem is receding and focus criticism on the few key sectors where joint ventures are still required. Better yet, the USTR should file cases in Geneva that would demonstrate conclusively that China is in violation of its WTO commitment not to require technology transfer as a condition for accessing its market.

In the early years of China’s opening, virtually all FDI in China was in the form of joint ventures. The foreign contribution to a joint venture invariably included technology, which meant the Chinese partner had immediate access. Indeed, China’s legislative body did not establish the legal framework for establishing wholly foreign-owned companies until 1986. Even after the law was promulgated, joint ventures continued to dominate for a few years; in 1987–88 an average of only 10 percent of the value of contracted FDI was wholly foreign owned.

However, as shown in the figure below, by 2000, on the eve of China’s accession to the World Trade Organization, almost half of actual incoming FDI was in wholly foreign-owned firms. This share rose to an average of almost 80 percent in 2008–14 before falling to around 70 percent in the last few years, as the composition of FDI shifted toward more restrictive sectors. In a wholly foreign-owned firm there is no transfer of technology, and the foreign firm can take the same steps it would take in any other market to prevent its technology from leaking to domestic firms. 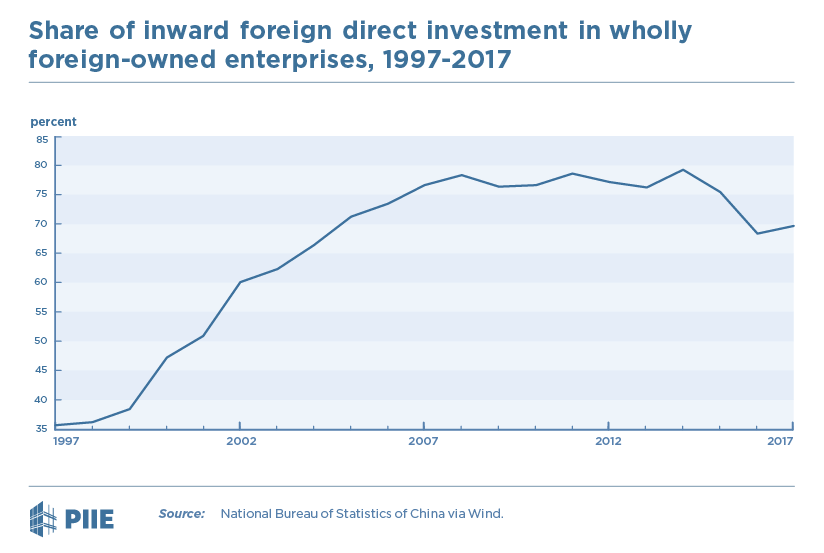 The long-term rise in the share of direct investment by wholly foreign-owned firms reflects China’s gradual liberalization of its FDI regime. Foreign ownership caps, which were once pervasive, have been gradually lifted. In manufacturing, for example, by 2017 caps applied only to automobiles and commercial aircraft. But this year even these sectors have been liberalized. The foreign equity cap for manufacturing new energy vehicles has been removed. Tesla has approval for a Gigafactory in Shanghai that will initially produce 250,000 electric vehicles and battery packs annually, with the capacity to double output over time. The plant will be wholly foreign owned, so Tesla will not be required to share its leading electric vehicle technology. Foreign ownership caps are scheduled for removal for conventional commercial and passenger vehicles in 2020 and 2022, respectively. BMW has already reached an agreement to increase its 50 percent ownership share in its existing joint venture plant in Shenyang to 75 percent. Foreign investment in the manufacture of commercial aircraft must still be in a joint venture, but this year the authorities removed the previous requirement that the Chinese partner must be the controlling shareholder.

Although slower, liberalization has also occurred in some services. Wholly foreign-owned hotels, restaurants, and retail stores have been widespread in China for decades. More recently, the Chinese government has been phasing out ownership caps in banking, securities, asset management, and insurance. The regulators have recently approved the first majority foreign-owned securities firm and the first wholly foreign-owned insurance holding company. And the French insurance firm AXA has just bought out its domestic joint venture partner, creating overnight the first top 20 property and casualty insurance company that is wholly foreign owned. These examples are likely the first in a wave of new foreign investment in financial services, as foreign firms seek to take advantage of the new ownership arrangements that allow them to exercise control.

As China’s liberalization of its foreign investment environment continues, the share of investment in the form of wholly foreign-owned firms is likely to rise gradually. The USTR should accelerate this process by bringing cases in Geneva that involve forced technology transfer.

Increasing Market Access for US Financial Firms in China