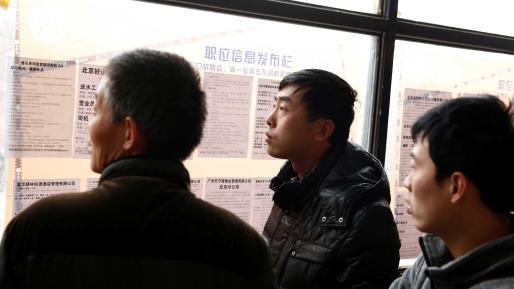 China’s latest census data show that its population is aging fast. Nearly one-fifth of the population in 2020 was aged 60 and above, 5.4 percentage points higher than a decade earlier. At the same time, the working-age share of the population, those between 15 and 59, continues to shrink. To counter the drag of a shrinking working-age population on growth, the government is now planning to gradually raise the legal retirement ages. However, age-based discriminations are prevalent in China’s workplace and are incurring a huge cost to labor market efficiency. Unless the government takes concrete actions to address the widespread age-based discrimination at work, raising retirement ages will only have limited impact on keeping more older workers in the labor force.

Ageism is prevalent in the Chinese workplace

The World Health Organization defines ageism as the stereotyping, prejudice, and discrimination against people on the basis of age. While there is a consensus against discriminations based on gender and race, the social awareness over ageism seems more muted. Many employers in China, the government included, regularly exercise age-based discriminatory practices in employment, especially in recruitment. While most international studies of ageism tend to focus on those in the labor force aged 45 and older, ageism at work in China starts as early as 35, a trend dubbed as the “age 35 phenomenon.” This is much younger than many places in the rest of the world, including the United States where the protections by the Age Discrimination in Employment Act begin at the age of 40.

The Chinese government, in its annual civil servants recruitment, accepts only applications by those aged below 35, according to Article 18 of the Provisions on Recruitment of Civil Servants (revised and promulgated by the Organization Department of the Communist Party of China’s Central Committee in 2019).[1] Similarly, in the corporate sector, an increasing number of employers state explicitly in their job advertisements that they only accept applications from workers 35 and younger. Age discrimination in China, like in the United States, is also reportedly rampant among tech companies during their recruitment and promotion. Data from the COVID-19 pandemic period continues to suggest that workers 35 and up were facing greater difficulty finding jobs.[2]

Ageism also exacerbates the prevailing gender discrimination against working women in China. Women over 35 tend to have greater family care responsibilities and are usually subject to various discriminations at work, including a pay cut during maternity leave, marginalizing behavior, and the possibility of being replaced by a younger person. According to a survey of nearly 2,000 white-collar professionals in China by the Social Investigation Center of China Youth Daily, 86 percent of the respondents agree that career opportunities sharply contract for working women when they reach 30. Working women of childbearing age tend to leave the labor force in the middle of their career, only to find it hard to return to the labor market.

Ageism at work can hardly be justified by empirical evidence

Ageism at work partly comes from employers’ stereotypical perception that younger workers are more productive, innovative, and energetic, while older workers have greater family care responsibilities and usually demand higher salaries. However, these stereotypes are poorly supported by exiting evidence. In fact, individual labor productivity follows an inverted U-shaped model: Starting lower at the early stages of one’s lifespan, increasing as the person gains experience until it peaks, and then slowly dropping off until retirement. Productivity peak age largely varies for individuals and across occupations and industries (C.A. Viviani et al. 2021).[3] Therefore, firms that impose arbitrary age cutting-point at hiring could miss ideal candidates with high productivity.

While a younger age is indeed positively correlated to innovation, it is not as significant as factors such as education and economic and social rewards in explaining the distribution of scientific output (National Research Council 2012). Moreover, the average age at which major invention and scientific outbreaks occur has also been rising over time, likely a result of increasing complexity and depth of knowledge (Jones 2010). At the firm level, research from China shows that perceived age discrimination in an organization would negatively impact an employee’s innovation behavior. Ageist practices that constrain the career advancement of middle-age and older workers could therefore hurt innovation.

On health, it is true that younger workers in general do possess better physical and cognitive health, but better health does not directly translate into better performance at work. With the Chinese economy transitioning into a knowledge-based economy, physically demanding jobs, such as those in manufacturing, are already on the decline. Experience is becoming a more important factor in determining one’s work performance rather than their physical health. A review of 74 papers on the relationship between productivity and age by C.A. Viviani et al. concludes that older workers show better job performance than their younger counterparts in various services sectors that are less physically demanding, possibly because older workers are more experienced, allowing them to compensate for excessive physical demands. Evidence from China shows that across firms in nonmanufacturing sectors, having a greater share of older workers tends to improve a firm’s overall performance (although not in labor-intensive companies) according to Zhang (2017).

On the surface, it appears that employers are reluctant to hire those over 35 simply because older workers can be more costly to hire. In an efficient labor market, work experience, such as education, is an important measure of human capital and thus a reasonable predictor of earnings. The real concern in China is that older workers may cost a seniority wage premium on top of their true value. This was certainly the case under the planned economy during the Maoist era, where workers’ wage and promotions were indeed largely seniority-based with the state sector offering life-long employment. However, since the advent of economic liberalization, the earnings premium gained from having seniority in the workforce has declined. Under China’s market-oriented reforms, wages in the private sector tend to reflect the economic value of a worker’s productivity rather than his or her seniority or experience on the job. Hua (2013) finds that working years became less substantial in predicting one’s earnings from 1988 to early 2000s. Yet, seniority remains a more significant predictor of earnings in state-owned enterprises than in the private sector (Zhang and Xue 2008 , Gao 2018).

Ending ageist practices will bring benefits to the Chinese economy, as the population ages quickly and its working-age population continues to shrink. As the average number of years of education of China’s working-age population continues to rise, the cost of age-based discrimination is only growing. When ageism hit middle-aged workers (35-44) in 2010, it hit a cohort with relatively low human capital in which only 20 percent finished high school. But when ageism hit the same age group in 2020, one-third of the cohort had a high-school education or above.[4] Therefore, continued ageist practices in employment would result in greater waste of human capital going forward. To the extent that education gap still exists across age groups, China should find ways to recapitalize on an aging labor force, at a minimum by providing older workers with more retraining opportunities to let them gain new skills.

Moreover, Chinese lawmakers need to seriously consider outlawing ageism in employment. While the state media has repeatedly called for an end to the “age 35 phenomenon” through legislation, little has been done in practice. There is no law against age discrimination in employment in China, nor is any legislation against it on the table. Given that the government is also implementing an ageist hiring policy, corporate employers may see no harm in establishing such policies of their own. Fortunately, the public opinion base for such legislation is gaining currency.

1. There were reportedly multiple cases in the past where potential applicants sued the government for denying their candidacy on the basis of age, but most cases were dismissed in court.

2. According to a 2021 Zhaopin report, one of the largest online recruitment platforms in China, from February to September 2020, job seekers 35 and older on its platform grew 15 percent compared with the same period in 2019; during the same period, however, those aged 50 and up looking for jobs grew 32 percent, while job seekers aged below 35 increased merely 7 percent.

3. Studies of individual productivity measures show a mixed pattern, with many studies estimating an age of 40, while other studies find peak productivity in later years. See National Research Council, 2012, Aging and the Macroeconomy: Long-Term Implications of an Older Population, Washington: The National Academies Press.