China's fiscal stimulus is good news, but will it be enough?

The Chinese government unveiled a bigger stimulus package worth at least 4.5 percent of GDP at the outset of the National People’s Congress that began on May 22, after China experienced an unprecedented 6.8 percent year-over-year contraction in its GDP in the first quarter. Rather than repeating its old playbook of relying primarily on credit expansion as it did during the global financial crisis in 2008–10, this year’s Government Work Report reveals that China is leveraging its fiscal policy to revive its economy suffering from the COVID-19 pandemic. This is good news for financial stability, though it may be too early to tell how successful the stimulus will be.

China has a longstanding practice of placing a ceiling of 3 percent on budget deficits as a share of GDP. This ceiling is now cracking with the deficit-to-GDP ratio in excess of 3.6 percent of GDP this year (see figure below), which means about RMB 1 trillion (US$140.2 billion)[1] will be added to the government’s deficit spending this year. Aside from the increase in budget deficit, the central government is issuing an anti-virus special government bond worth RMB 1 trillion that is not accounted for in the budget deficit. The combined RMB 2 trillion (US$280.5 billion) will be transferred to prefecture and county governments directly in its entirety. 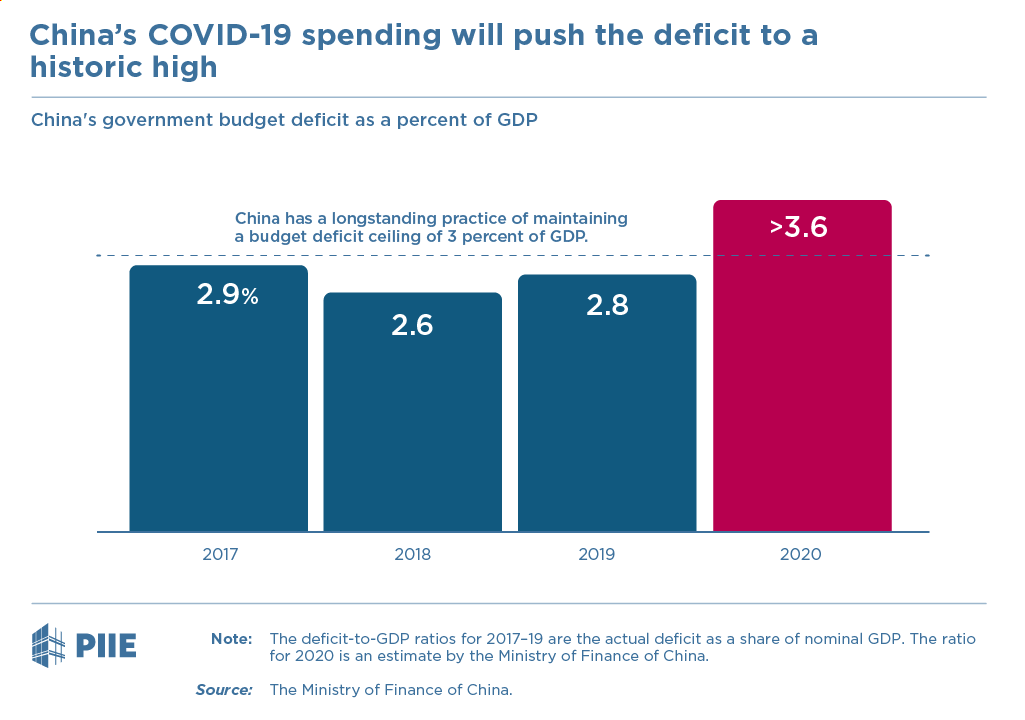 Though smaller than some had initially expected, the fiscal plan will help ease the mounting fiscal pressures of local governments responsible for expenditures in most areas directly related to people’s livelihoods. Besides, special local government bonds totaling RMB 3.75 trillion (US$525.9 billion)—RMB 1.6 trillion (US$224.4 billion) more than the amount in 2019—will be issued, and the proceeds will be primarily spent on infrastructure, both new and conventional, and on stimulating private consumption.

The government is extending its existing policy of cutting and exempting value-added taxes and social security contributions of small firms through the end of 2020. Banks have now been asked to continue suspending the collection of interest and principal payments on loans extended to small firms through the end of March in 2021. The unemployed, including migrant workers who have paid towards unemployment insurance for less than a year, were previously restricted from drawing benefits but can now claim unemployment benefits going forward.

Another change in the Government Work Report that has received widespread attention is the absence of a GDP growth target for 2020. This is probably inevitable, given the great uncertainty about the pandemic itself and the gloomy global economic outlook. The absence of a growth target means officials can concentrate on stabilizing employment and ensuring people’s livelihoods rather than achieving a certain growth target. It also probably means that China’s previous goal of doubling the size of its economy by the end of 2020 from the level of 2010, which was not mentioned in the Government Work Report, can be postponed and does not have to be achieved this year. PIIE previously forecast that China would deliver a 1.5 percent growth in 2020.