As China staggers through its worst economic shock in modern history, retail sales have been especially hard hit, dropping 19 percent in the first quarter of 2020.[1] Yet online sales of physical goods have grown by 6 percent during the lockdown imposed to combat the COVID-19 virus outbreak (see figure below).

Two factors appear to have brought about this trend. First, China enforced a country-wide lockdown centered in Hubei province, the origin of the outbreak, leaving consumers little choice over how to buy necessities. Second, Chinese private entrepreneurs, both the tech giants and small retailers, have swiftly adapted to ecommerce, and China’s digitally-savvy consumers have been perhaps more ready to adjust than their counterparts in other countries. The shift in consumer behavior could last well beyond the pandemic. 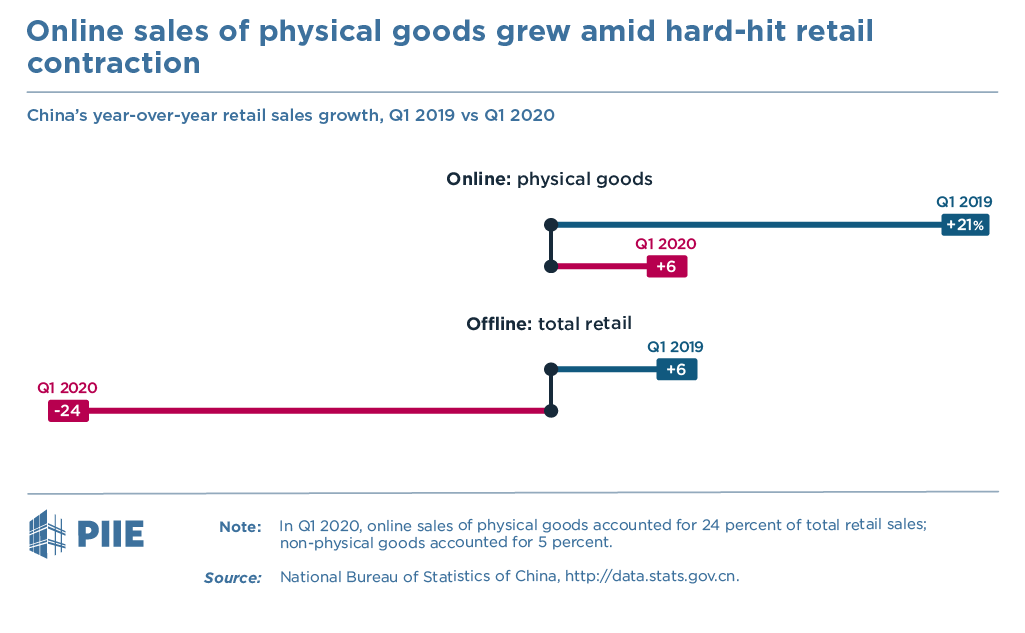 Online sales of grocery and foodstuffs grew by 33 percent during the outbreak while their overall sales[2] grew at only one-third of that rate. Customers new to buying fresh produce online have warmed to the idea, while existing customers are now spending more time shopping and browsing. Correspondingly, the top three e-grocers separately reported upswings: a 300 percent increase in sales (MissFresh), a 80 percent increase in orders placed (DingDong), and three-fold growth in supply to meet the demand surge (Alibaba’s Hema).

A good example of that adaptation is Chinese tech giant Alibaba Group, which launched a new employment model of “labor sharing” to absorb unused labor from retail services into its grocery unit Hema to address the sudden growth in grocery delivery demand. This model allowed Alibaba’s nationwide grocery unit to “borrow” 3,000 employees from 40 partner restaurant chains and retail stores that were temporarily shut down, relieving payroll pressure from the offline businesses while expanding Alibaba’s logistics to reach more households.

During the health crisis, small retailers moved quickly to online platforms for their survival. In the first half of February, more than 30,000 offline retailers moved daily to Taobao, China’s largest customer-to-customer online marketplace. The number of merchants and salespersons who used livestreaming on Taobao for the first time surged seven times in February from January.

Online retail has also jumped in Italy, the United States, and elsewhere. From February to March, daily downloads for the mobile apps for Instacart, Walmart Grocery, and Target increased by 218 percent, 160 percent, and 98 percent respectively. Amazon expanded employment by 175,000 and increased pay.

Yet long wait times and delays are frustrating European and American consumers. China has experienced fewer of these problems. Before the pandemic, more than 400 million people, or about half of the country’s netizens, had ordered food online, a service backed by the world’s largest food delivery business, worth $46 billion, twice the size of America’s. Consumer spending habits in China are already well-entrenched online and through mobile devices, easing the shift.

It is too early to tell whether consumers will go back to shopping in person after the pandemic. But the online retail market was largely expanded with new participants entering in the past few months, meaning that many merchants and consumers have overcome the barriers to online retail shopping, giving them an incentive to stay online.

The tech giants that were able to respond quickly amid the outbreak are now taking up crucial roles to help small businesses recover. Ecommerce giants Alibaba and JD.com have rolled out assistance programs for small and medium businesses. To help Hubei, the area most devastated by the pandemic, leading ecommerce providers launched targeted initiatives to revitalize the province’s sales. Such support and benefits are likely to help retain, if not attract more, smaller businesses and merchants online even after the pandemic. Retailers may well find online sales more profitable.

It was during the 2003 SARS outbreak that Taobao launched and later grew, catalyzing the launch of Alipay—now the largest online payment system. Intensive development of the ecommerce ecosystem since then has proven strategic during the COVID-19 health crisis. The market expansion and adoption of new shopping routines during the lockdown could further advance the development of the online sector.

The aftereffects of the pandemic may well find that e-grocers can deliver meat and vegetables safer and fresher than brick-and-mortar stores. Health concerns raised by the pandemic, as well as the ongoing avian flu and African Swine Fever that remain without cures, have also accelerated China's need for a more robust cold-chain network—the temperature-controlled supply chain that keeps perishable goods fresh during long storage and transportation. Its underdevelopment has hindered e-grocery expansion in China in previous years. Accelerating such an infrastructure will foster its growth of e-grocers.

Chinese policymakers are taking notice, promoting new models to integrate online and offline retail shopping. This March, the National Reform and Development Committee and 22 other ministries jointly announced the facilitation of "Smart Retail" and "Smart Business Cycles" building on new infrastructure and explicitly stating to merge online and offline consumption. If the digital expansion and the associated cost reduction happens soon, retailers and consumers may find it hard to resist online business as the new normal.

*The views expressed in this blog are those of the authors and do not necessarily reflect the opinions of the Peterson Institute or of the International Monetary Fund or its members.

1. Retail sales refers to sales of consumer goods to households and entities for nonproduction and nonoperation purposes. See more details at the National Bureau of Statistics of China.

2. Data on overall sales refers to the retail sales of the enterprises (units) above designated size.