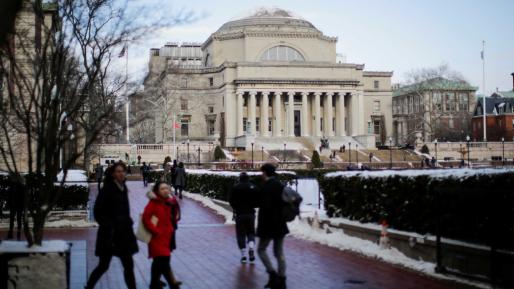 The spiraling economic confrontation between the United States and China has led to predictions that the two intertwined economies are heading toward a great “decoupling.” Trade barriers, export and investment controls, and fears about national security seem likely to drive these predictions. But it turns out that on one most basic and important US-China link—human interaction and people-to-people exchanges between the two countries—the concerns about estrangement seem exaggerated. Despite tough talk about a new divide, there has not been a major break in the number of travelers and migrants flowing between the world’s two biggest economies.

To be sure, growth in the number of Chinese students coming to US shores has slowed, but not enough to constitute a “decoupling” yet. Chinese students still are the biggest national group of foreign students in the United States. The number of US students in China remains low. But tourism between the two countries remains brisk, with more than two million visiting each country annually. In addition, permanent and temporary labor migration from China to the United States remains at near historically high levels.

China is the largest source of international students in the United States, at least for now 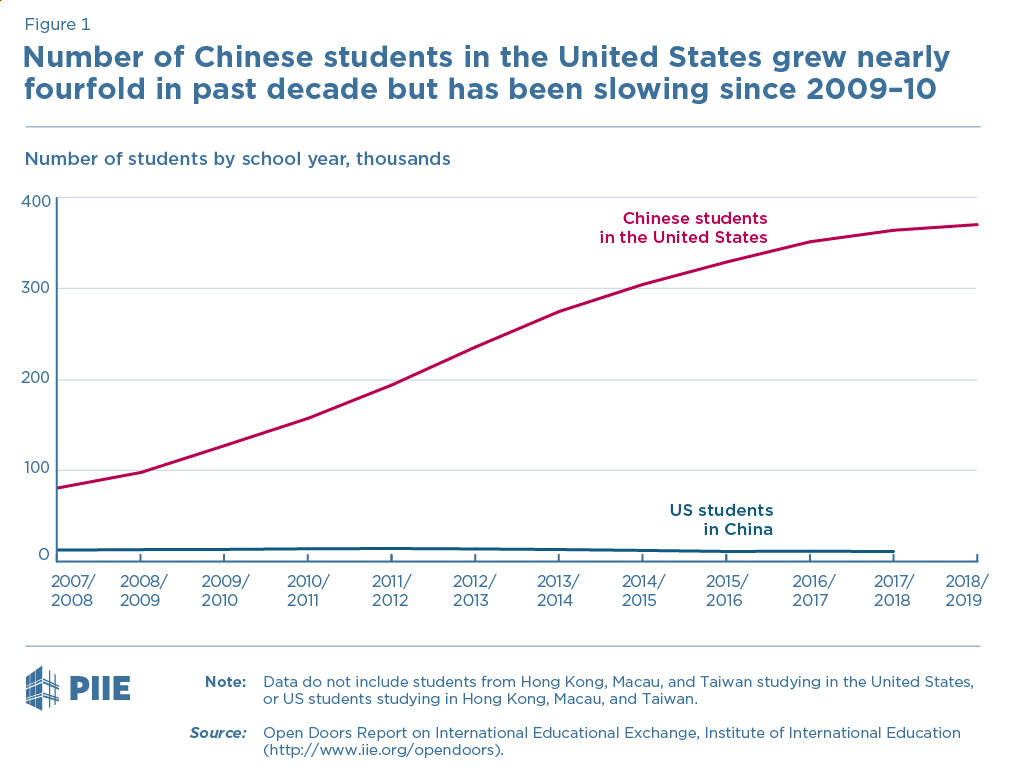 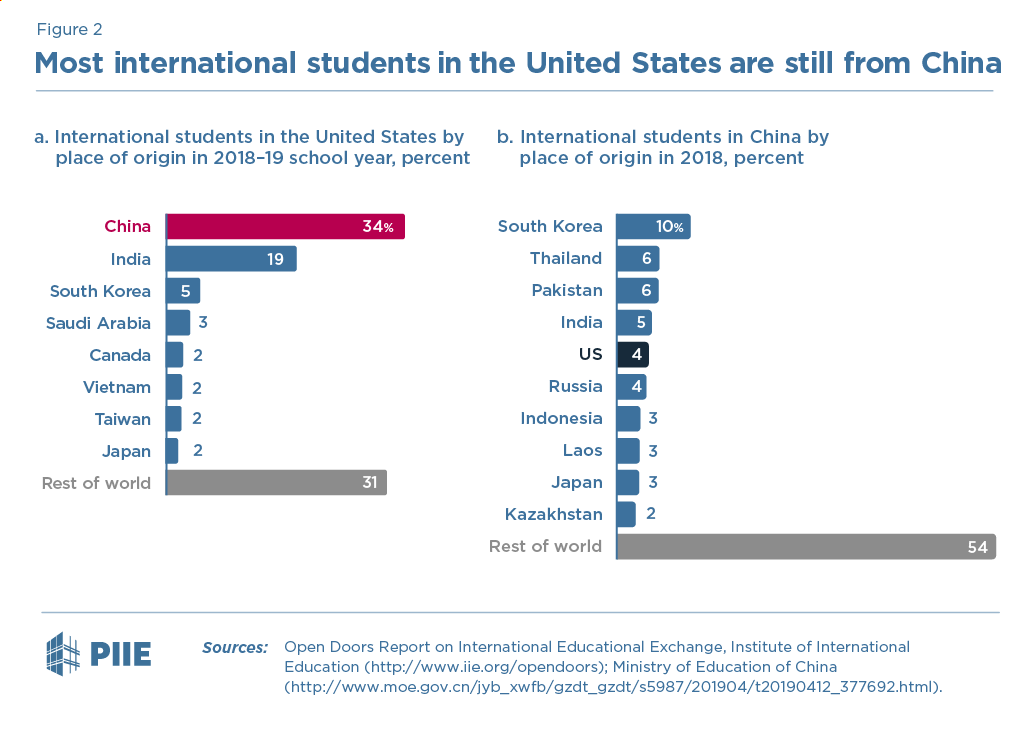 The growth in the number of Chinese students in the United States has slowed, however, since the period of rapid increase after the global financial crisis, and the number could actually decline in a few years. Data from the US State Department on visa issuance shows that the number of F-1 student visas issued by US consular locations to Chinese nationals, excluding those from Hong Kong, Macau, and Taiwan, has nearly collapsed since 2015 (figure 3), partly because the United States extended the validity period of student and exchange visitor visas from one to five years in November 2014 following President Obama’s announcement at the APEC leaders’ meeting in Beijing.[1] 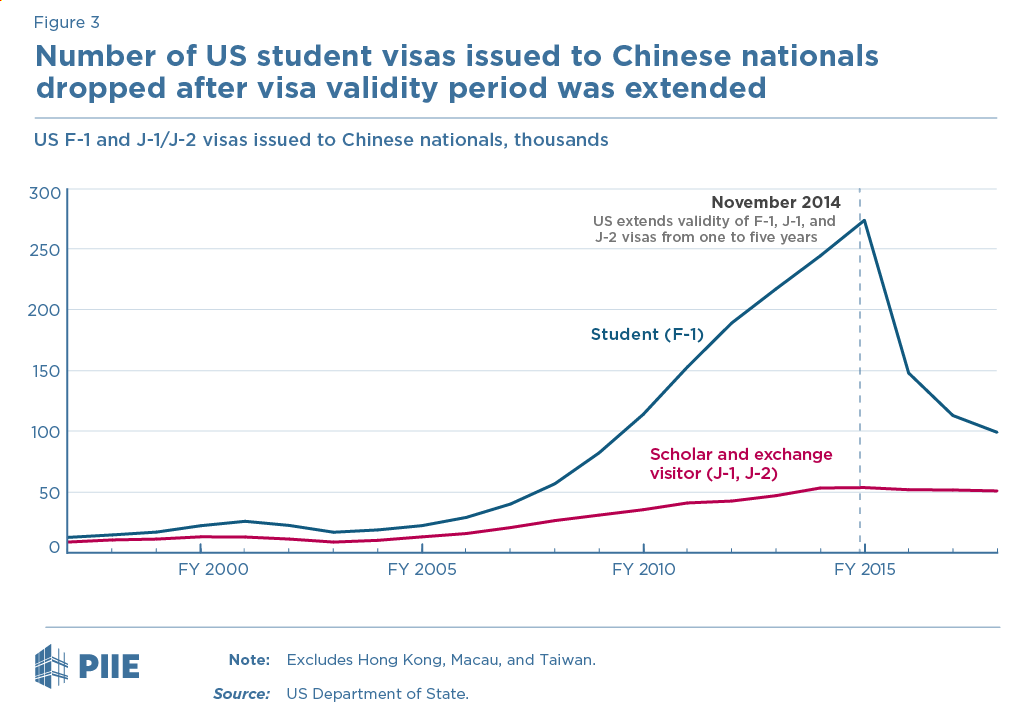 Over 2 million Chinese and Americans travel in each direction annually

There is more balance in tourism (in terms of two-way tourist arrivals) than in education (in terms of students coming to study) between the United States and China. According to the National Travel and Tourism Office of the US Department of Commerce, Chinese tourists visiting the United States dropped by nearly 228,000 in 2018 over the previous year, a trend the agency forecasts will continue but at a slightly slower pace in 2019 (figure 4). Annual fluctuations of this magnitude in a gross number of more than 2 million tourist arrivals are not consistent with “decoupling.” At the same time, the Chinese government reported that nearly 172,000 more US tourists visited China in 2018, compared with the previous year, the third consecutive year of such growth. 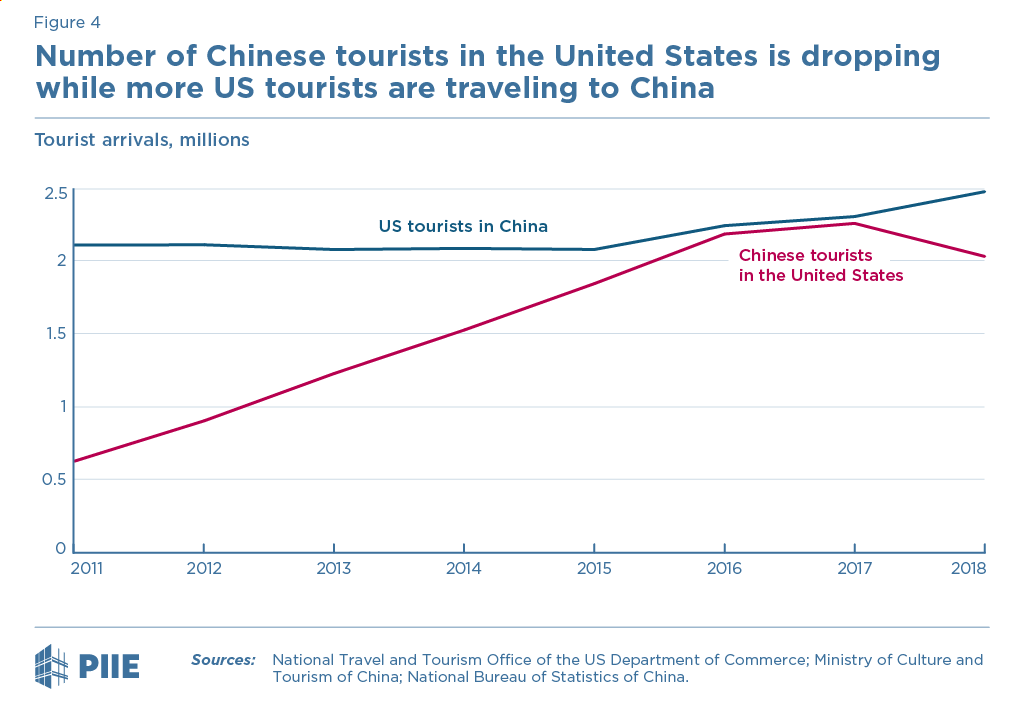 Data on US B-1 and B-2 business and tourist visa issuance show a plunge since November 2014, partly because the United States extended the validity period of these visas in 2014 (figure 5). Rather than having to potentially apply each year, frequent Chinese travelers to the United States would now have to renew their visas only once every decade, causing annual visa issuance to drop dramatically. The actual number of times Chinese individuals entered the United States will, however, likely have dropped much less. An increase in the visa validity period should not affect arrivals negatively. In fact, it should help boost arrivals. 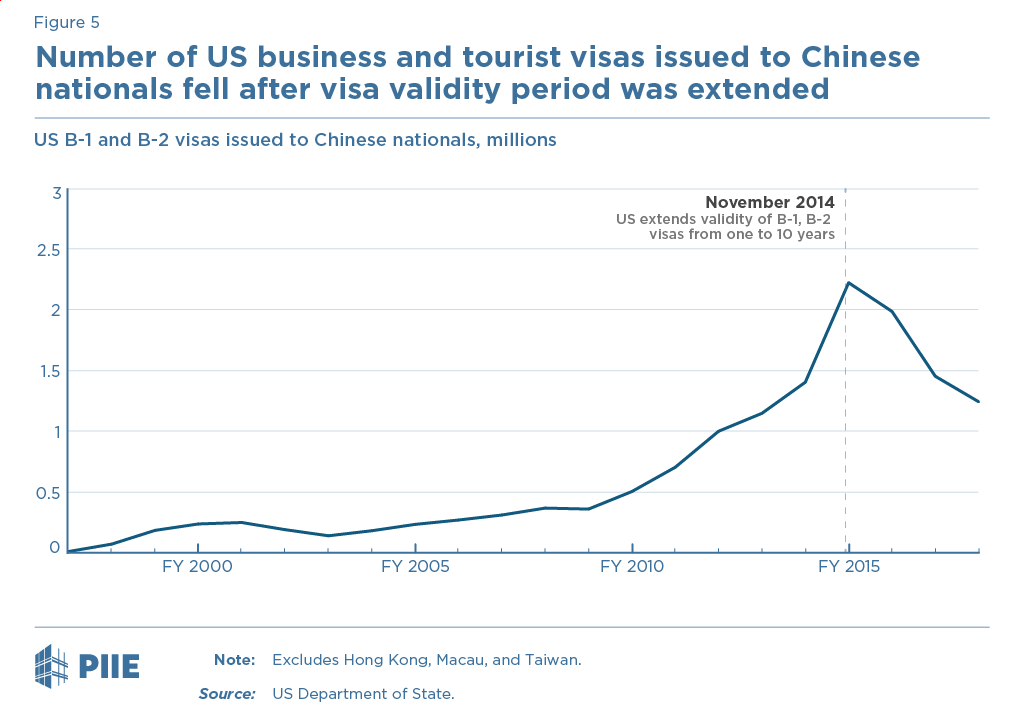 Permanent migration, i.e., green card issuance to Chinese nationals, is subject to a cap of 7 percent of all annual green cards granted to any single nationality.[3] Figure 6 shows that the number of new Chinese green card recipients has remained stable at 60,000 to 80,000 annually. These green card holders face long wait times before obtaining legal permanent residence in the United States. The US State Department’s most recent Visa Bulletin indicates that some applicants for family-based and employment-based green cards have waited for more than 10 years. 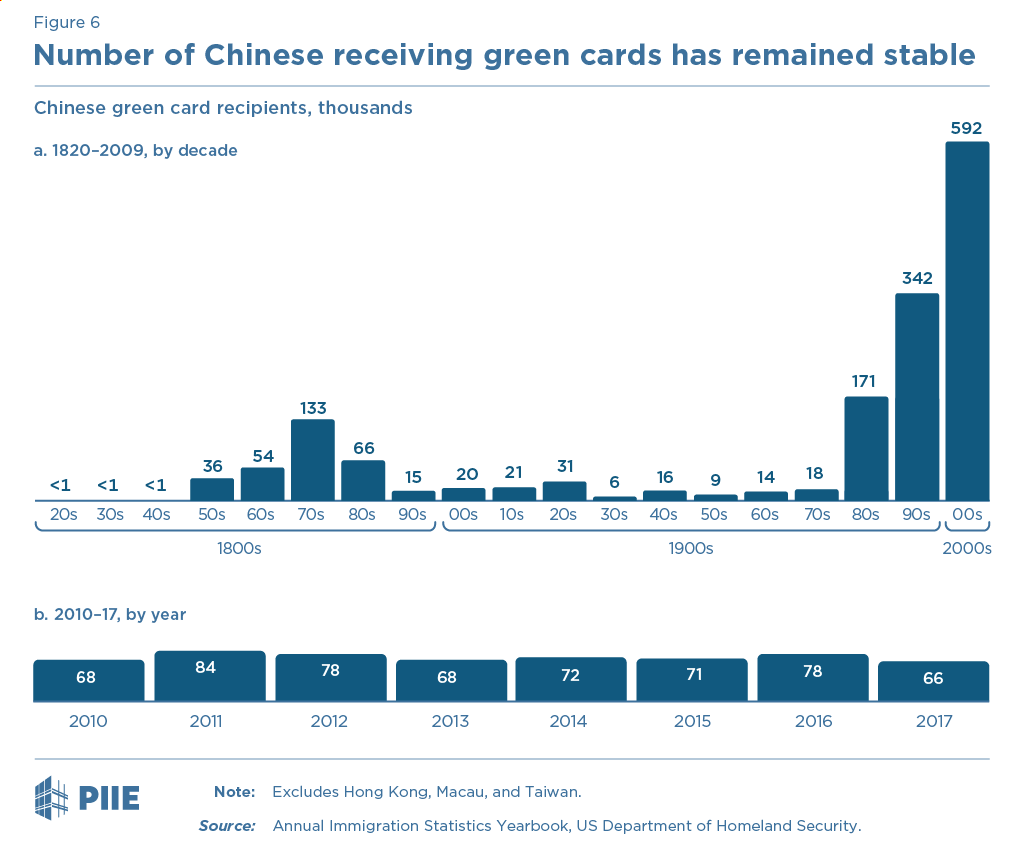 Temporary employment-based migration in the form of H-1B high-skilled workers and J-1/J-2 scholar and exchange visitors also do not appear to have been affected by developments in the US-China relationship. J-1/J-2 visas remain at the historically high levels of just over 50,000 annually first reached in 2014, while H-1B issuance to Chinese nationals has also risen in recent years and in 2018 reached more than 27,000 for the first time (figure 7). H-1B visas, initially granted for three years, can be extended for another three years. This work permit is granted by the US Department of Homeland Security ahead of actual visa issuance by the State Department. Figure 7 shows that approvals in these two categories of work permits (green and yellow dotted lines) for Chinese nationals have also been rising. Employment of Chinese nationals on temporary visas in the United States is thus probably at or near all-time highs. Of course, the decline in the number of Chinese students coming to the United States may change this trend in coming years. 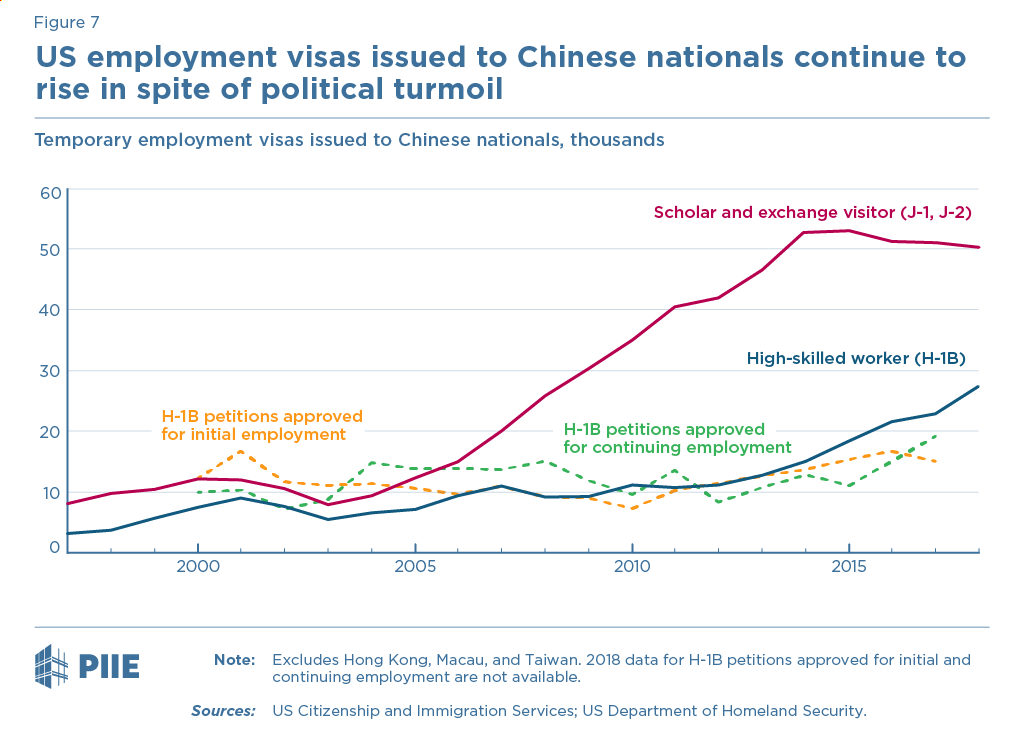 Permanent migration to China by Americans is a relatively new development for which little data are available. Though the Chinese authorities first rolled out their framework policy on foreigners’ permanent residence in China in 2004,[4] only 7,356 foreigners received the “Chinese green card” through 2010. In 2016, the number reached a record 1,576 following the Chinese leadership’s decision to relax its cumbersome immigration restrictions to attract more international talent. No recent data could be found on US citizens working in China on a temporary work visa.

1. An F-1 visa to Chinese nationals prior to 2014 was valid for one year, meaning a Chinese student pursuing a four-year degree would need to be issued four visas if he or she planned to leave and reenter the United States annually during his or her stay. If on the other hand, no departures from the United States were foreseen, only one visa would be required. After 2015, another visa would also be required if a student pursued Optional Practical Training (OPT) after graduation or continued studying for a higher degree. Hence, the change in US visa policy in November 2014 is unlikely to have accounted for the entire significant decline in F-1 visa issuance to Chinese students after that date.

3. US law makes it possible to add unused green cards in individual green card categories in a particular fiscal year to the total annual available number the next fiscal year. Hence, the levels vary from year to year.

4. See Measures for the Administration of Examination and Approval of Foreigners’ Permanent Residence in China issued by the State Council of China in August 2004.