Over the past two years China’s authorities have constricted the growth of credit in an attempt to combat inflation and rein in excessive loan growth. This has made it more difficult for a variety of businesses to obtain credit, particularly bank loans. As a result, firms are increasingly turning to the shadow banking industry to meet their financing needs.

The dramatic slowdown in credit growth can be seen in the table below. Note that nominal loan growth is adjusted by the GDP deflator in order to account for the effect of rising prices.

Those with excess cash to lend are motivated to find ways around credit tightening regulations in order to avoid having their money sit in banks and receive negative real interest rates (-2.5 percent for the year on one-year deposits). Due to the credit shortage, these informal and nontraditional lenders are able to charge rates that range from slightly above to many times the benchmark lending rate used by Chinese banks (the real rate has averaged a measly .6 percent this year so far).

One of the key problems in measuring the size of China’s shadow banking industry is determining what should be included. Most of the above estimates do not provide detailed explanations of what is included and therefore it’s difficult to know if they are even measuring the same thing.

The Chinese government includes its own estimate of nontraditional finance in a statistic called social finance (社会融资). This statistic was previously released on an annual basis, but since 2010 has been released quarterly (Note that insurance compensation and “other” are still only provided annually, but these are relatively small amounts). The graph below shows the amount of social finance with traditional bank loans removed. 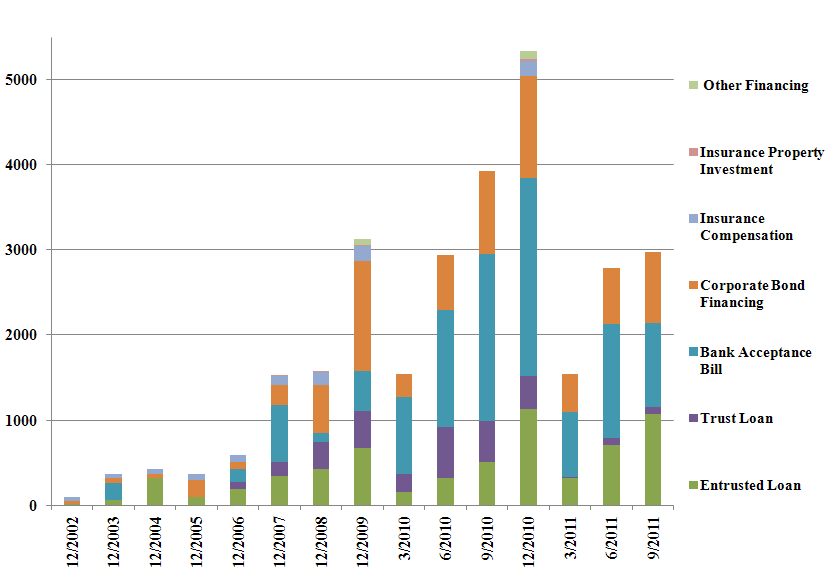 The problem with the concept of social finance is that it is not perfectly analogous to shadow banking. Several of the items included in social financing, notably bank loans, insurance compensation, and corporate bonds, are well-established methods of finance and should not be considered part of any shadow system. Additionally, there are several important channels of nontraditional finance which are not included (outlined below).

1. Off-balance-sheet lending: Most of China’s commercial banks, including the big four state banks, offer a variety of banking services that do not fall upon their balance sheets. These services include letters of credit, loan commitments and guarantees, entrusted loans, and asset supervision. Since these activities are not recorded on banks’ balance sheets they are not subject to mandatory capital requirements. However, the above mentioned activities are disclosed to regulators and therefore are supervised to some extent.

However, banks also engage in off-balance-sheet activities that are not fully disclosed to regulators. These activities include informal securitization of loans and Banker’s acceptance bills (undiscounted), as well as the ever-growing variety of wealth management products. Recently there has been a push by the People’s Bank of China (PBoC) and the China Banking Regulatory Commission (CBRC) to bring these practices under closer supervision, but the extent of follow through with these regulations is yet to be seen.

2. Direct company-to-company finance: Another channel for financing during periods of tightened credit is direct loans between nonfinancial companies. Corporations flush with cash are reluctant to put all their surplus funds in bank accounts because of negative real interest rates on deposits. Instead, these companies take their excess funds and make loans directly to companies that are unable to receive credit from the banks. These loans are offered at much higher interest rates than bank loans. The risk analysis and mitigation performed by the lending company is likely to be much less sophisticated than that performed by banks.

Many company-to-company loans have a direct link back to the banks. Companies channel funds through banks, via entrusted loans, to borrowers in exchange for paying a commission to the bank. State-owned and other high-regarded borrowers are believed to be using their preferential access to low-cost finance at banks to take out loans. These funds are then passed along on to cash-strapped small and medium enterprises in return for a fee.

3. Underground banks: Underground banks are unregulated and often unregistered financial organizations that offer many of the same services as traditional banks. These banks tend to proliferate in areas where there are large numbers of small and medium private enterprises, such as Zhejiang Province. Underground banks have attracted a lot of attention recently as many have become swept up in the credit crisis that has engulfed Wenzhou, a city that is a bellwether for China’s private sector. In order to attract deposits, underground banks offer savers interest rates as high as 20 to 30 percent and then loan out funds at even higher rates. Underground banks are often quite aggressive in their marketing of loans and are believed to be much less sophisticated in their analysis of risk than traditional banks.

4. Private peer-to-peer (P2P) loans: Recently, there has been an explosion of peer-to-peer lending. These loans eliminate the middleman by using online platforms to directly connect lenders and borrowers. The P2P lending platforms profit by charging a small commission for each loan. Rates offered through P2P networks are typically significantly higher than those at traditional banks. Currently, the industry is largely unregulated because it does not fall directly under the PBoC’s or CBRC’s jurisdiction. The industry is so new that it is in many ways the Wild West of lending. Some P2P lending platforms perform a basic level of scrutiny of both borrowers and lenders and require some level of reserve capital. Others eschew all safeguards and do little more than directly connect individuals. A few P2P platforms are so eager to attract businesses that they have started offering principal guarantees in the case of loan defaults. The financial risk present in these operations is relatively high given the absence of regulatory supervision and lack of other traditional safeguards

5. Trust companies: Trust companies are an important source of finance outside of the traditional banking system. The primary function of trust companies is to act as third-party wealth managers, serving both financial institutions and wealthy individuals. These companies pool capital from investors and then channel these funds into a variety of sectors, including the real estate market, infrastructure, financial instruments, and private equity.

Trust companies play an important role in the off-balance-sheet lending done by banks. Trusts purchase loans from banks, take them off the bank’s balance sheet, package them together, and then sell these loans to other financial institutions and private individuals. This activity has come to the attention of regulators and banks have been warned against working with trust companies. However, this type of lending is believed to still occur, albeit at a reduced rate.

Trusts have come to play an increasingly important role in providing finance to those cut off from the banks. This is especially true in the case of property developers who turned to trusts for financing after China’s regulators ordered banks to stop making loans to developers. The growing reliance of property developers on this type of financing has led to increased scrutiny of trusts by the CBRC.

As mentioned above, trusts are subject to regulation, but at a less stringent level than the banks. Moreover, the constantly evolving nature of financial products offered by trusts has meant that regulators have struggled to keep pace with the industry.

6. Pawnshops: Pawnshops are a refuge for small and micro enterprises that have been denied credit from traditional financial institutions. Pawnshops typically offer short-term credit to businesses that are in need of working capital or bridge loans. In exchange for quick access to credit and limited credit checks, pawnshops often charge steep interest rates and have hefty collateral requirements. Due to these high collateral requirements, the pawnshop loan industry is relatively low risk. Pawn shops are not regulated by either the PBoC or CBRC and fall under the jurisdiction of local authorities.

7. Leasing companies: In the wake of credit restrictions, leasing companies have become an important source of medium-term financing for small and medium enterprises. Leasing companies effectively provide loans for investment in fixed assets, renting equipment to businesses (often with ownership transfer at the end) in exchange for a series of payments. Because many enterprises are borrowing money to purchase equipment in the first place, leasing companies can provide an effective substitute to loans. Many leasing companies are subsidiaries of banks and leasing is a method by which banks can extend additional credit despite government restrictions. The credit risk in the leasing industry is relatively low because most of these physical assets can be repossessed during a default. The longer duration of these loans mean that the interest rate offered tends to be lower than more short-term types of shadow banking.

9. Microfinance lenders: The microfinance industry in China, often called small loan companies, is a growing source of finance for small and medium enterprises. These companies are prohibited from taking deposits from the public and may not loan more than 5 percent of their capital to a single borrower. These lenders primarily offer unsecured loans, meaning that the losses they face from nonperforming loans are potentially very high. Small loans companies are allowed to charge interest rates up to four times the benchmark rate and earn additional revenues through fees. They have become an important source of finance for small credit-seeking companies because they are not subject to many of the tightening policies aimed at China’s larger banks.

10. Offshore Borrowing: Many Chinese enterprises have turned to lenders abroad in an effort to get access to additional credit. Enterprises borrow, often through their subsidiaries, in the offshore renminbi markets located primarily in Hong Kong. These funds are then remitted back to their operations on the mainland. Not only is credit more available in the offshore markets, but often the rate is lower because of the dearth of investment opportunities. This form of shadow finance may be significantly reduced in the future as a result of an announcement by the PBoC this summer that it would no longer accept applications from mainland companies for direct offshore borrowing.

There are several important points to take away from this. First, analysts are widely divided on the size of shadow banking in China. These differences stem from disagreements over what should be considered shadow banking and the lack of comprehensive official statistics.

Second, Chinese regulators have focused in on many of the individual components of shadow banking (wealth management products, bank-trust loans, etc.), but the overall phenomena has yet to be systematically addressed. This is in part due to unclear divisions of regulatory responsibility.

Third, scrutiny from regulators has slowed the growth of some of the more worrying channels of shadow banking, but overall amounts will continue to grow as long as China has a combination of negative real interest rates on deposits and credit tightening policies.

Excellent blog; keep up the good work; can you shed any light on what happened in early 2007 when (as I understand it)Huijin and the big 4 banks were transfered from PBof C to M of F?

Dan, The best treatment of this subject that I have seen is Walter and Howie's "Red Capitalism." Check out chapter 5.

just finished it; thats where my quesion comes from; seems to me an important political-economy turning point;