China's economy has recovered sharply since the second quarter of 2020, while the rest of the world is still deep in the Great Lockdown Recession. China's economic output grew 0.7 percent in real terms January through September 2020, and it is projected to be the only major economy that will expand in 2020. Despite weak growth in the rest of the world, China's net exports still grew, contributing 15 percent of its growth in the first three quarters. Because global trade volume is forecast to fall 10 percent in 2020, China's share in global trade will almost surely rise substantially.

China's exports are surging despite disruptions

Merchandise exports, after declining in the first quarter, have rebounded since then. As figure 1 shows, China's exports in October rose 11.4 percent from a year earlier, higher than 9.9 percent in September and 9.5 percent in August. Cumulative year-to-date exports through October expanded 0.5 percent. Global trade also seems to have recovered, but more slowly than China's trade. The World Trade Organization lately forecast that global merchandise trade in 2020 would fall by 9.2 percent, while the International Monetary Fund is now projecting a 10.4 percent decline in world trade volume, including goods and services. 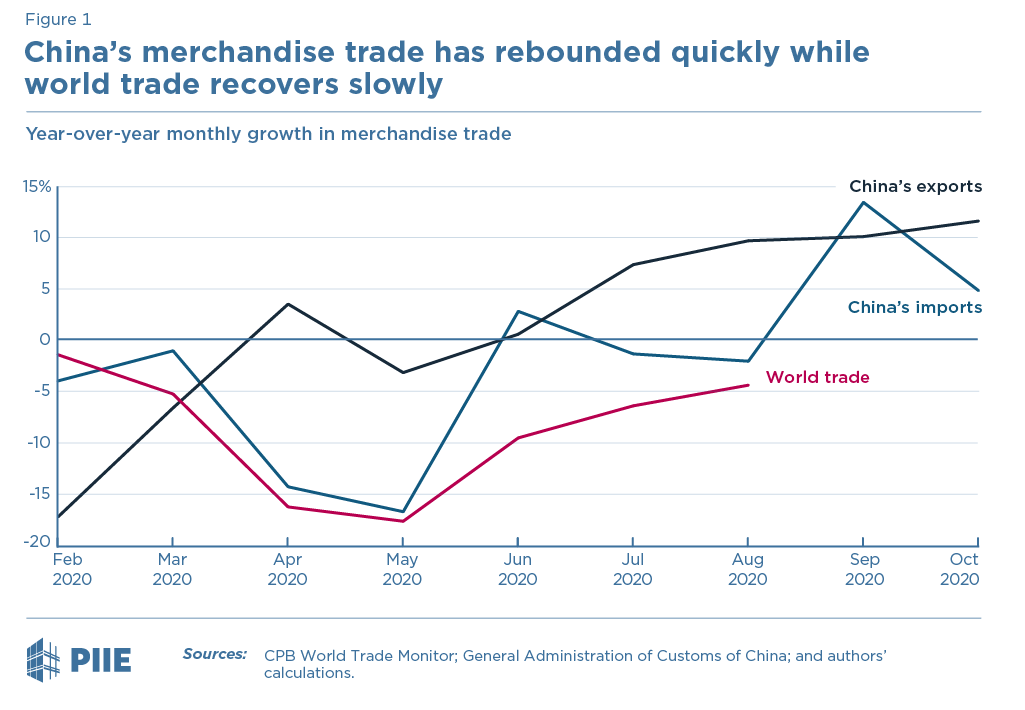 Latest data from the Chinese customs authority also suggest that global demand for Chinese goods is gradually coming back. Based on year-to-date data, China's merchandise exports to many of its largest trading partners, including the United States, the European Union, and member states of the Association of Southeast Asian Nations, have grown again in recent months.

The strong recovery of China's exports results from, first, the quick recovery of Chinese industry, thanks to China's success in controlling the spread of the pandemic domestically. Industrial value-added growth picked up quickly after the height of the crisis in the first quarter and has now come back to pre-COVID-19 levels (figure 2). 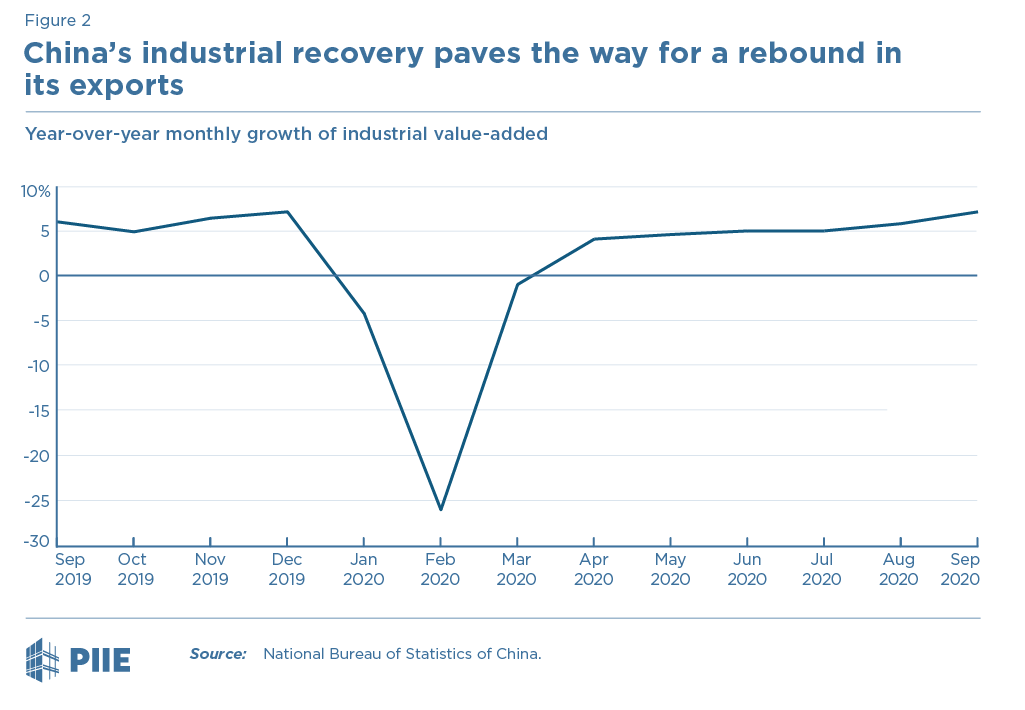 In addition, continued discrepancies between supply and demand in many overseas markets have driven the recovery. While COVID-19-related restrictions have been lifted in some places around the world, some countries are still in lockdown mode. Production of goods globally is still running short of demand in these countries. Chinese exporters are actively filling this vacuum. More likely than not, China will continue to go from strength to strength in global trade through at least the end of the year.

But there is also a counterforce, which is China's appreciating currency. The renminbi has strengthened dramatically in recent months and is expected to keep appreciating through at least the end of 2020, making Chinese goods more expensive for trading partners. From the beginning of the year to early November, the renminbi appreciated about 4 percent vis-à-vis the dollar; from its low point in late May, the appreciation has been 7 percent. The appreciation of the renminbi has something to do with both the export rebound and the continued influx this year of foreign funds into China's onshore capital markets, especially the bond market.

China's imports are also recovering, though slower than exports

Through the end of October 2020, China's imports dropped 2.3 percent compared with the same period in 2019. But monthly data reveal signs of a speedy recovery. Imports in September expanded 13.2 percent year over year, followed by a 4.7 percent increase in October (see figure 1), which makes China on track to reach its pre-COVID-19 import level by the end of 2020.

US-China phase one tracker: China’s purchases of US goods