Can Japan Tell Us Where Chinese FDI Is Going In ASEAN?

China’s investors have made steady inroads around the world. In March 2014, the country’s external assets grew to $6.13 trillion, of which outward direct investment (ODI) has played a modest but fast-growing role. While much has already been said about China’s stream of capital into mature economies such in the EU and United States, eliciting parallels to Japan’s “Rockefeller Center moment” of the 1980s, Chinese investors are also hungry to carve out markets closer to home.

In this post we investigate China’s expanding investment footprint in ASEAN, particularly in comparison to Japan, the current leader both in terms of investment and mergers and acquisitions in the region. Historically, the two countries have targeted different countries and industries within ASEAN, but as China’s economy continues to develop and its needs change, the overall investment strategy for these two Asian giants may begin to look more and more alike.

By the Numbers: China and Japan Compared

Between 1995 and 2003, China’s cumulative FDI flows into ASEAN amounted to just $631 million dollars, less than 0.2 percent of the region’s total global inflows. By 2012, UNCTAD recorded China’s stock of investment in ASEAN at $28.2 billion. Relative to the rest of the world, ASEAN has become an important destination for investment, falling just behind its 2012 positions in the EU ($31.5 billion) and exceeding investment in Africa ($21.7 billion) and  North America ($22. 1 billion) .

While China still pales next to Japan’s $121 billion dollar stock position in ASEAN, both countries have recently placed similar importance on the region in their ODI portfolios (Exhibit1). Additionally, China’s stock, though coming from a far smaller base, has expanded at an annual average growth rate of 56 percent compared to Japan’s 16 percent from 2004 – 2012, implying movement towards further convergence. These trends appear to support investor expectations: the China-ASEAN Business Council aims to expand bilateral investment to $150 billion over the next eight years. 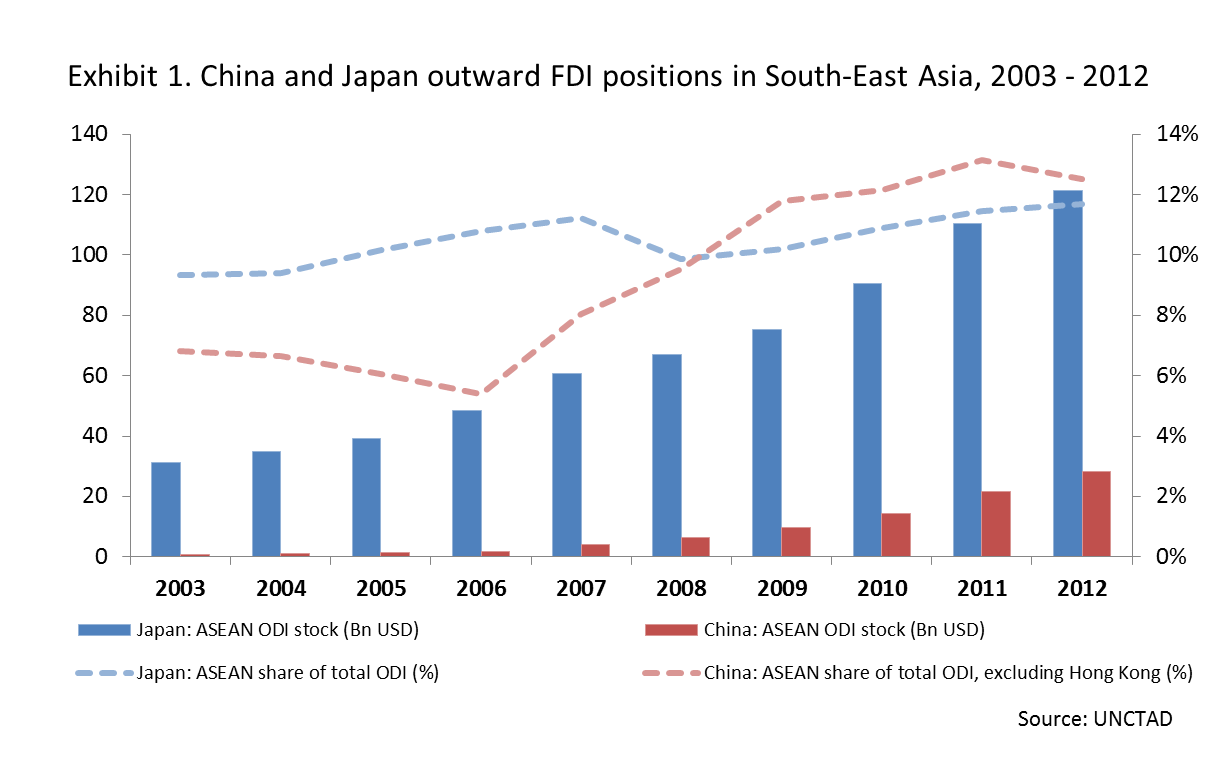 ASEAN is clearly an attractive market for both Chinese and Japanese investors, but patterns of investment look somewhat different. Chinese investment is relatively more focused on ASEAN’s frontier economies, with nearly one third of its investment (on average) directed towards Myanmar, Laos, Vietnam and Cambodia. In contrast, over 90 percent of Japan’s stock has been invested in the more developed ASEAN-5 economies (Malaysia, Indonesia, Singapore, Thailand and the Philippines), with small gains in investment in Vietnam beginning in 2007.</p> <p>At the sector level, Japan and China also have different investment patterns. According to the Heritage Foundation China Global Investment database, in the 2000s large Chinese ventures were overwhelmingly focused on energy-related sectors. However, in 2013 over half of the large new Chinese investments and contracts had shifted into real estate and infrastructure (Exhibit 2). Interestingly, the timing broadly coincides with the commodity price boom of the mid-2000s, followed by diversification as prices (particularly in metals) fell in 2012 and 2013. 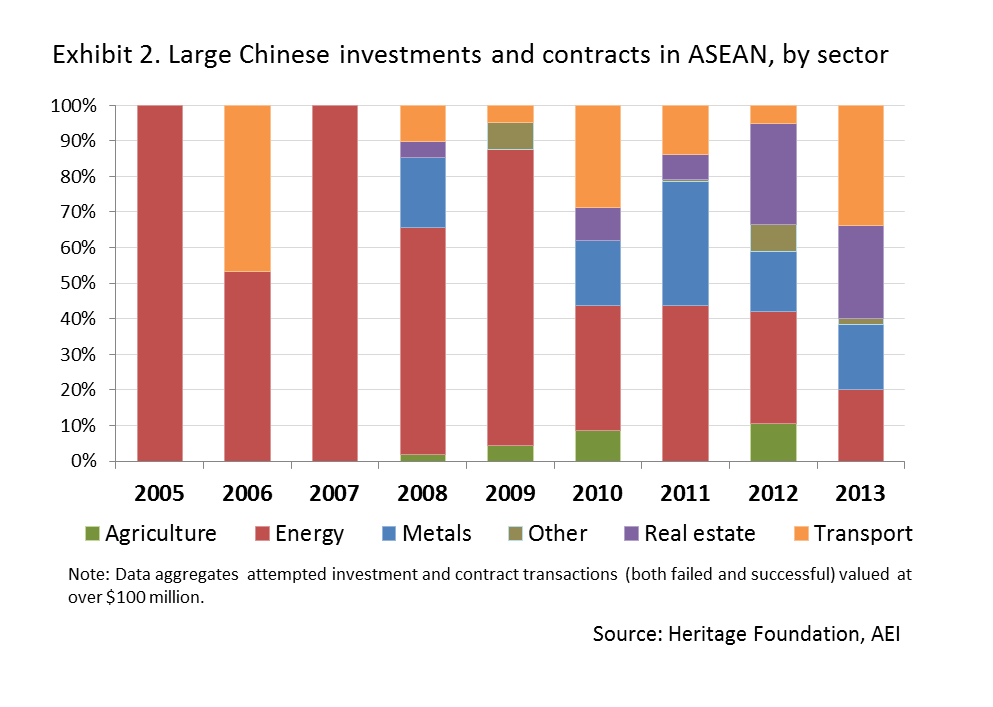 While not directly comparable, the Bank of Japan’s sectoral breakdowns of FDI positions  shows Japan’s 2013 investment in the region, while still largely focused on manufacturing, has been shifting towards finance and insurance, as well as wholesale and retail operations (Exhibit 3). 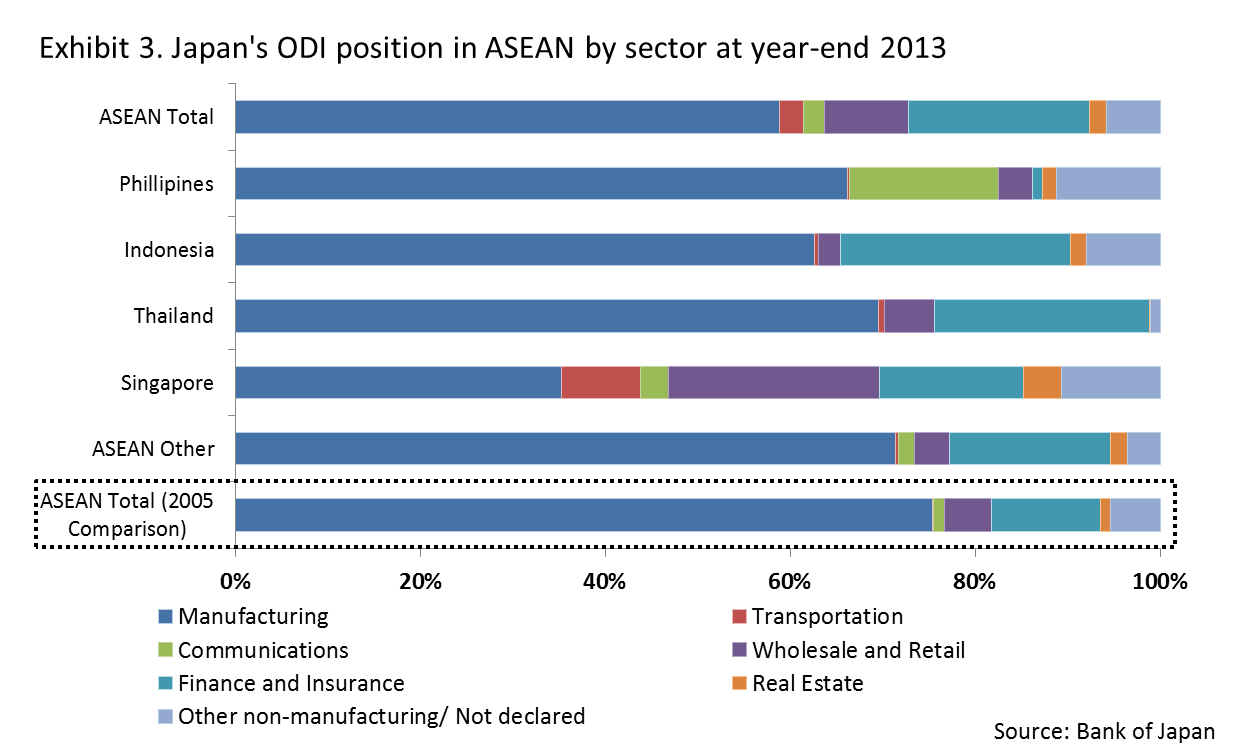 Looking to the Future

Besides both countries’ observed interest in ASEAN, it would appear that Japan is not yet an apt comparison for China’s investment ventures into the region. As others have observed, Chinese investment has traditionally focused on gaining foreign technology or extracting inputs for manufacturing back home rather than offshoring production altogether like the Japanese model. However, China’s labor cost advantages have diminished with its economic development. With profit margins feeling the squeeze, manufacturing is being offshored to Vietnam and Cambodia.

Moreover, shifts in investments from both countries reflect the conception of South East Asia as a large and thriving consumer market, increasingly integrated with the world economy and hungry for infrastructure. ASEAN consumers have gobbled up both Chinese and Japanese imports with increasing vigor. As exhibit 3 shows, Japan has increasingly moved towards retail and finance operations to service local markets. China, like Japan, is also involving itself in large-scale infrastructure projects within the region, such as the construction of a railway connecting southern China to Singapore through Laos and Thailand, along with real estate and construction projects throughout the bloc.

Besides pure economics, the two largest economies in Asia also share similar geo-political motivations for investing in the region. Both Beijing and Tokyo have sought warmer relations with South East Asia through cooperative agreements in trade, diplomacy, aid, and defense, with direct investment an important component. For Japan, nowhere is this more visible than Myanmar, where the Abe administration has been determined to win favor and influence by canceling debts, providing soft loans, and spearheading major ventures like the Thilawa SEZ. In China’s case, firms looking to capitalize on Vietnam’s inclusion in the TPP have increasingly been investing in manufacturing in the country.

China will no doubt make its own unique mark on South East Asia. However, current trends both in China and in ASEAN provide strong hints that its investments in the region will grow more diversified and sophisticated following gains in manufacturing, infrastructure, real estate, and consumer services. While it is still early to tell, Japan may soon find a bold new competitor to challenging its investment incumbency in ASEAN – and one that looks a lot like itself.