Owners of the debt of local government special purpose vehicles (SPVs) should choose wisely and be cautious. At least this is the message central government officials are communicating to China’s financial markets. Two weeks ago, Premier Li Keqiang identified “controlling the risks of local government debt” as one of his administrations key reform initiatives. But who exactly should be worried about the risk of holding local government debt? The answer used to be banks but recently institutional investors have increased their role.

During the late 1990s up to 2008, China Development Bank (CDB) used to be behind most of local government debt in China. The policy bank pioneered the model of lending to local government SPVs. The bank was able to provide long term loans to localities which the localities paid off using revenues from local land sales to pay down interest and principal until project cash flows came online. This system seemed to work well until 2008 when the return-on-assets of CDB began to fall behind most commercial banks. CDB’s difficulties were not soon enough to discourage commercial banks from lending to local governments.

However, since 2010 commercial banks essentially halted net lending to local SPVs. CBRC is now closely monitoring the banking sector’s exposure to local government debt in an effort to prevent any further growth in risk. According to a statement by CBRC chairman Shang Fulin, the stock of bank loans to local government SPVs has only grown by 2 percent over the past two years. 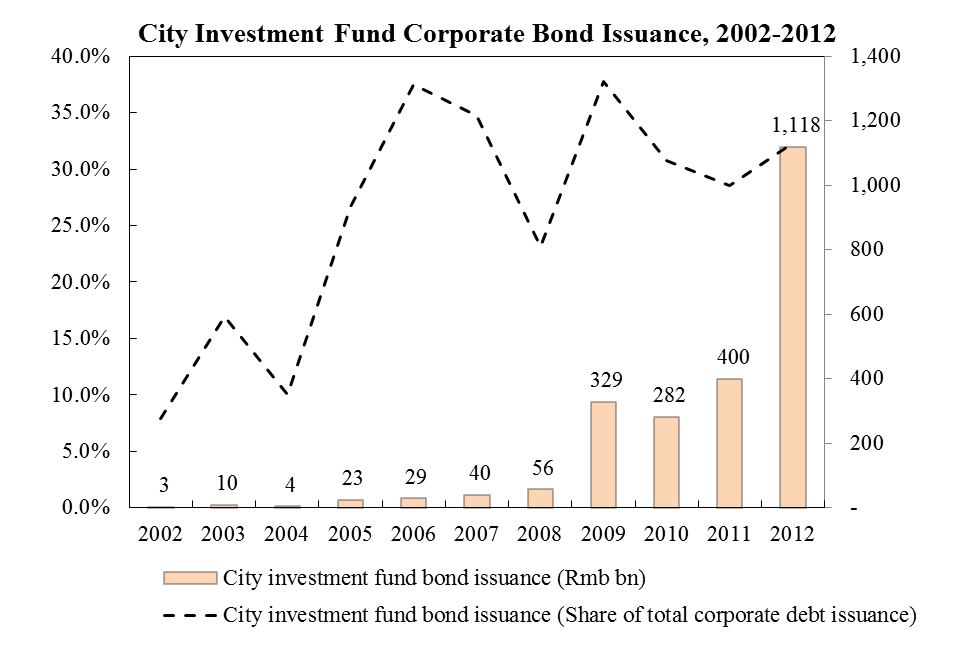 Data on the corporate bond market reported by the China Central Depository and Clearing Company shows that “investment funds” accounted for over half of the value of all corporate debt purchases over the past two years, and as much as 75 percent of all purchases over the past year. Investment funds include pension funds and a broad array of wealth management products managed by fund management companies, insurance companies, trust companies, private funds, and private equity firms. Trust products in particular have invested heavily in the bond market. Outstanding investment in bonds reached Rmb 533 billion at the end of 2012, a 372 percent rise over 2010. 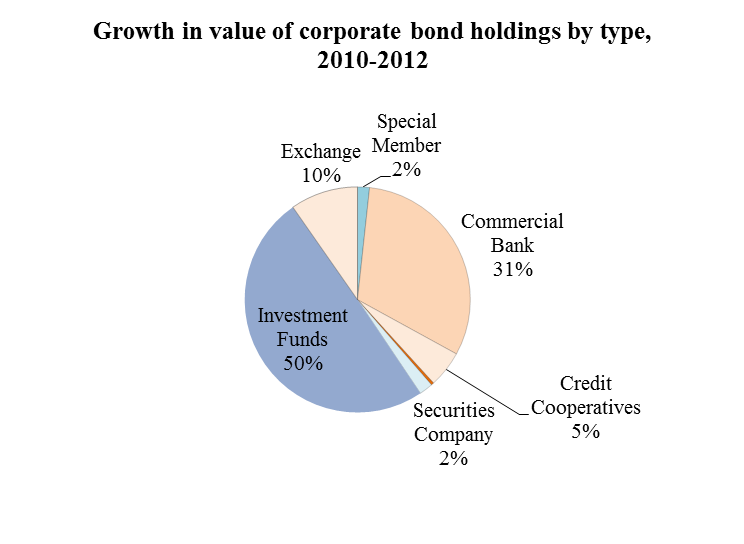 If true, should institutional investors -particularly investment funds – be holding local government SPV debt? For more developed financial systems the answer would probably be yes but for China not yet.

For example, a credit report produced by Chengxin International Credit Rating on November 2012 gave an AAA rating to a medium term note issued by Beijing Infrastructure Investment Company to finance subway expansion.  The report outlines the strength of Beijing’s fiscal situation as a reason for the investment grade rating because the Beijing government has said it would funnel an increasing amount of funds from its infrastructure investment budget every year to support the company. The assumption in this report among others is that the provincial or municipal government would be able to honor budgetary commitments to the company or ultimately use their fiscal resources or assets to bailout the SPV in the event of a default. But the market is treating this assumption as true for every local government SPV at any level of government (provincial, city, and county).

Second, as a result of the lack of clarity, any default episode of local government SPV would be messy. The end-investors in corporate bonds are diverse. They could include financial institutions, corporations, or even households. Some investors may be no more aware of the risk of their investments than households depositing money in banks. Almost all of the SPV bonds issued in 2012 had above a AA rating and 12 percent had a AAA rating, suggesting in some cases these bonds are as safe as central government issued debt.

Those with money in investment funds could be unwittingly exposed to higher risk assets. If a local government SPV were to default and governments do not act quickly to bail out investment funds exposed to such bonds, contagion could spread as end-investors realize that their money is invested in higher risk assets. This could lead to a rapid outflow of funding for local government projects or growing hordes of angry investors.

In short, the problem will be immensely more complicated and grow faster than it would otherwise if local governments had simply been borrowing from commercial banks, where there is a single lender to negotiate with.

So is the solution to keep local government SPVs out of bond markets or keep certain investors out of local government bonds? Yes and no. One of the clear positive outcomes of local government financing companies turning to debt markets is the fact that it requires publicly releasing financial statements and applying for credit ratings. Yet without explicitly defining the government guarantees of these vehicles it is impossible to know their true risk. As we have said before on this blog, ultimately local governments should be paying for more projects with tax revenues or directly issuing debt rather than relying on SPVs. Until the underlining uncertainty surrounding these vehicles is lifted, accurate assessment of the risks of local government debt will be mission impossible for any institutional investor.