Little Evidence of Reshoring Trend by US Firms

The reshoring of manufacturing by US firms has been getting a great deal of public attention. Reshoring occurs when firms reverse their offshoring decisions, shifting production back to the United States. But has this become an important trend as many claim? The chart provides a snapshot of offshoring activity of US multinationals. The solid line represents imports by US-based MNCs from their foreign affiliates. This is a good measure of offshoring as it captures intermediate inputs that are produced abroad by US-based MNCs but then sold back to the United States for final assembly or sale. The dot-dash line represents imports by US-based MNCs from firms with whom they are not affiliated, often referred to as foreign outsourcing or arm’s-length trade. Through 2012, neither of these types of off shoring showed signs of a sharp reversal that would be consistent with a widespread reshoring trend. For more analysis, see Oldenski (2015). 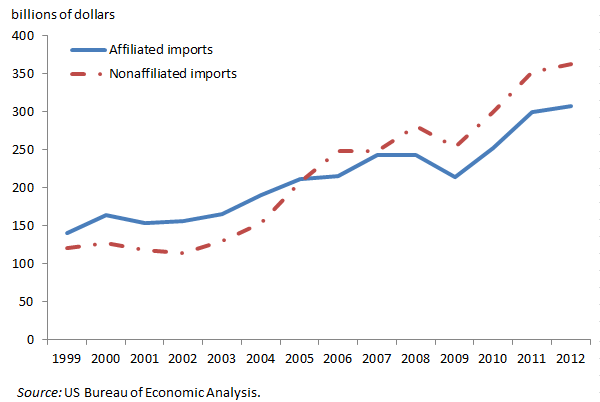