Last week, the Peoples Bank of China released total social financing data showing credit growth continued to slow in October. Credit growth in the first ten months of the year was down 8.9 percent compared with the same period last year. Even better the proportion of off-balance sheet credit issued by banks or non-bank financial institutions –shadow banking credit - such as trust loans, bankers’ acceptance bills, and entrusted loans continued to slow down to 16 percent of total credit so far this year, half the proportion of last year. In a related change, the share of credit from bank loans is up to 61 percent this year, the highest share of total credit since 2012.

This data shows, in spite of growing concerns surrounding slower industrial output and real estate investment, Chinese policymakers remain committed to reducing financial risks. Although policymakers have taken targeted measures to reduce the cost of borrowing for certain groups (mostly home buyers and small businesses), they have been careful to avoid a broader increase in credit. The continued commitment to stabilizing output growth and employment without resorting to more rapid credit growth is a welcome sign that Chinese policymakers are on the right track to managing China’s economic transition. 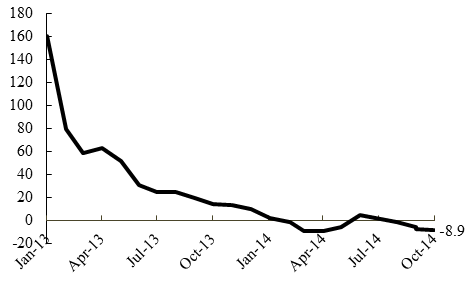