The increasingly fragile fiscal situation of several Brazilian states has come to the fore as many attempt to renegotiate debts with the federal government or have halted payments to civil servants, disrupting the provision of major public services, like health and security. Four of Brazil’s five largest states, responsible for some 65 percent of the country’s GDP, exhibit net debt-to-revenue ratios way above 100 percent. Rio de Janeiro, the state where the Olympics will be held, has the largest net debt-to-GDP ratio, at 127 percent, followed by Brazil’s southernmost state of Rio Grande do Sul (see chart). 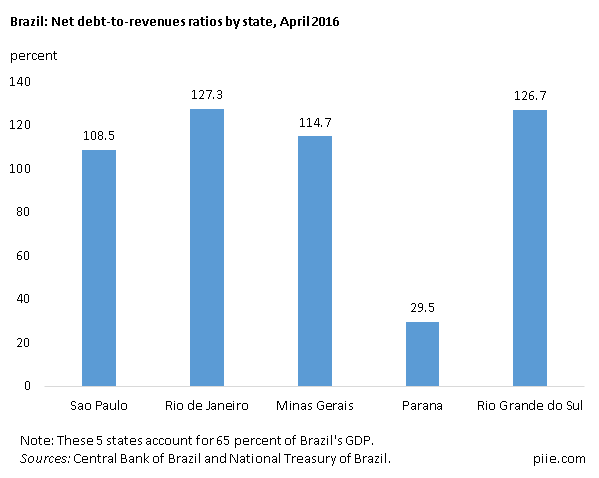 The state of Rio de Janeiro recently missed a payment of $8 million to Agence Française de Developpement (AFD), France’s development bank, and another of some $300,000 to the Inter-American Development Bank. Since the Brazilian Treasury is the guarantor for these loans, payments were made by the government over the past few days, increasing Rio’s debts with the federal government.

The state of Rio has suffered a massive fall in revenues as a result of the recession, falling oil prices—the state is one of Brazil’s largest oil producers—as well as the corruption scheme affecting oil company Petrobras, headquartered in Rio de Janeiro. State finances could be dealt a further blow if expected revenues from the Olympics fall short of what is currently expected. The Zika virus epidemic and Brazil’s political and economic crises may well make what is already a bad situation much worse.

Gordian Knot: Why Brazil’s Recession Could Last Until 2018