I was especially struck last week by the claim in the Bank of England Monetary Policy Committee's (MPC) Inflation Report that "pay growth is projected to rise to close to 4 percent by late 2016". It isn't going to. The MPC is unthinkingly assuming what is called mean reversion. They have no credible model of wage determination. This is just simple (and inevitably wrong) mechanics.

The MPC is simply assuming that wage growth will return to the levels it had pre-recession. Growth in average weekly earnings averaged 4.3 percent from March 2001 through December 2007. Pay growth averaged 4.3 percent in the private sector and 4.4 percent in the public sector over this period. Over the same time period consumer price index (CPI) inflation averaged 1.7 percent, so the assumption then is average real wage growth will soon be over 2 percent, despite the fact that over the past four years it has fallen by 2 percent per annum.

There is growing evidence from around the world that the underemployed, as well as the unemployed and potential and actual migrants, are holding down wages.

One major concern is that the wage growth pre-recession was unwarranted, so lower wage growth now is inevitable to catch up for the overly generous pay raises awarded before the disaster. Other advanced countries didn't have real wage growth approaching such high levels. They certainly don't seem to be justified by relative productivity differences.

The MPC forecast for wages was published on the same day that the Office for National Statistics (ONS) released its latest data on the labor market, which didn't exactly square with their claims. The national statistic on wages and earnings is average weekly earnings. It covers workers in firms that have 20 workers or more, which excludes 91 percent of all UK firms. I kid you not. This sample exclusion matters given the rise in low paid, zero hours contracts jobs, which are likely predominantly in small firms, who we know still can't get access to credit. 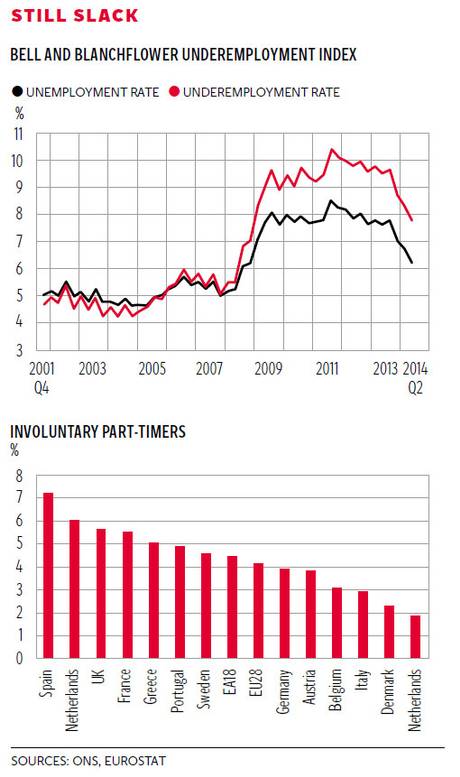 The average weekly earnings growth for the economy as a whole was 1 percent in September, which because of the sample exclusions is inevitably an upwardly biased estimate of earnings growth in the UK economy. CPI inflation was 1.2 percent, and retail price index (RPI) inflation, which is the usual measure used in the labor market, grew by 1.6 percent. So, however you look at it, real earnings continued to fall. In fact, the level of the average weekly earnings was £481 in September, below the level six months earlier in April of £482.

But there was more. Each quarter the ONS also reports wage data from a random sample of employees using the Labour Force Survey, which is used to calculate the unemployment rate. This has the benefit that it includes workers in both big and small firms. Some responses are given by proxy, but there is no obvious reason to believe this upwardly biases estimates. The survey had some telling findings. Average gross weekly earnings of full-time workers in the Labour Force Survey rose by only 0.7 percent overall but fell by 0.5 percent in the private sector. Nominal earnings, not adjusted for buying power because of rising prices, fell in manufacturing, construction, transportation, and storage, and professional, scientific, and technical activities. They also fell in the East and West Midlands, the East, Wales, Northern Ireland, and Scotland. Take these industries and regions out and earnings went up a lot!

Why is wage growth still so low? The answer is essentially threefold. First, there is the possibility that firms will move abroad if wages were to rise. There is also the fear and the actuality that workers from Eastern Europe will come to the United Kingdom, attracted by a rise in earnings in the United Kingdom relative to what they can earn at home. Over the last year the number of workers from the A10 Accession countries employed in the United Kingdom rose by 210,000. Second, public sector pay freezes help to keep pay growth down in the private sector. Third, the level of slack in the UK labor market remains substantial.

Other countries don't have the data to produce a desired hours series, but they do have data on the numbers of part-time workers who would like a full-time job. This is up in the United Kingdom from around 700,000 at the beginning of 2008 to 1,340,000 in the latest count, down from a high of nearly 1.5 million in the summer of 2013. It turns out that other countries have also seen this phenomenon of rising involuntary part-time employment. The United States has seen a rise in the numbers of what they call part-time for economic reasons from around 4 million at the start of 2006 to 9 million at the end of 2010.

The numbers have fallen back to 7 million but have done so more slowly than unemployment has. The second chart shows the extent of part-timers wanting full-time work for Q2 2014 in Europe is especially high in the United Kingdom. It is third among the major EU countries, behind only Spain and Ireland but above France and Italy. This all matters because there is growing evidence from around the world that the underemployed, as well as the unemployed and potential and actual migrants, are holding down wages. Wage growth of 4 percent is a chimera on the horizon. As a result it is hard to see rate rises before late 2016 at the earliest.