How to Pay for a Refugee Crisis

In the wake of the Paris attacks, Europe faces a twin crisis. It must confront terrorism and it has yet to come up with a common strategy to its immigration crisis, a fact that has encouraged the resurgence of xenophobic parties across Europe. With a tide of up to 1.5 million refugees this year, things may be about to get worse. The free mobility of people is a core value of Europe, but it will get lost if Europe cannot secure its external borders.

The costs of securing external borders, now an even greater priority, and integrating those migrants and refugees who are accepted, will far exceed what current budgets anticipate. Europe could spend €20 billion ($21.36 billion) annually to secure its borders, and between €10,000 and €20,000 per head to integrate newly arrived migrants. The EU annual budget is €140 billion, of which only €143 million is available for external Frontex border control , compared to $32 billion spent annually by the United States on the same tasks. Appropriating even a fraction of this amount from the existing EU budget would be an almost impossible task. Timely action requires finding other funding sources.

Ironically, the solution to Europe's immigration crisis is of the kind that Europe could not reach during the euro crisis: the issuing of security and mobility bonds.

Ironically, the solution to Europe's immigration crisis is of the kind that Europe could not reach during the euro crisis: the issuing of security and mobility bonds (SMBs). These bonds offer the kind of financial engineering, macroeconomic policy, and political economy Europe needs to mobilize collective resources and fund its immigration policy while preserving open internal borders.

The bonds would be partly repaid by the migrants themselves in the long run via higher labor supply, economic growth, and tax revenues. Making SMBs "revenue bonds"—that is, sovereign debt backed by the general tax proceeds of the member states—therefore makes sense. To reduce the fiscal costs for current residents, some migration visa fee income could be earmarked, as in the United States where the Citizenship and Immigration Services section of the Homeland Security department is almost entirely financed by user fees.

The macroeconomic case for the bonds is straightforward. Europe today borrows essentially at zero percent and could definitely use a fiscal stimulus of €40 billion going toward maintaining political stability and raising the continent's long-term economic growth rate.

Finally, and most importantly, the political economy of SMBs is fundamentally different from that of eurobonds in general, for three key reasons.

Historically, debt burdens are mutualized only when they are perceived as coming from shared goals and interests. Alexander Hamilton could mutualize the legacy debt of the war of independence in the United States because it was seen as the consequence of a common fight. For the same reason it has proven impossible to issue eurobonds after the EU crisis: Legacy debt from the crisis was perceived as the consequence of individual misbehavior. The crisis of the open borders project, on the other hand, is perceived as a joint responsibility and can only be solved at the European level.

Second, risks from the migrant crisis are more widely shared than those of the financial crisis. Greece and Italy are frontier countries to the Syrian crisis, Germany is the main destination of migrants, and France and Spain have high exposures to Africa. There will be those who balk at the idea; particularly some of the eastern countries who have taken such a strong stand against further immigration. But a strengthened pan-European border is also in their interests and would provide other security benefits.

Third, elevated levels of migration into Europe are the new normal. In the United States, demographic pressures from neighboring countries are likely to decrease as the share of mobile young people declines in Latin America. In Europe's neighboring regions of the Middle East and Africa, the number of young people is still rising rapidly. Migration pressures will continue even if solutions were to be found to the Syrian and Libyan civil wars.

One should never let a serious crisis go to waste. Migration is a long-term problem that requires a long-term common response. Issuing SMBs could finance an ambitious solution and help counteract the threats to European unity. 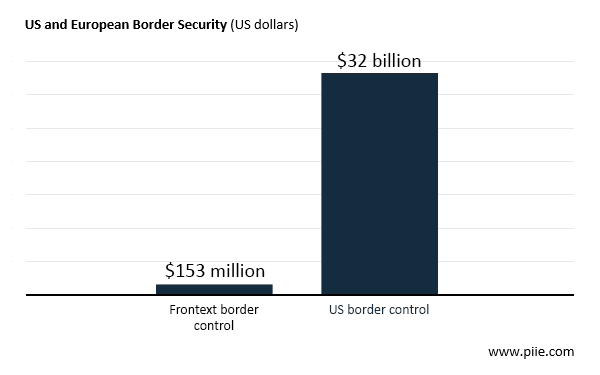