Chancellor George Osborne, in his autumn statement, announced a deficit reduction program for the next parliament that inevitably involves colossal but unidentified cuts to services, the like of which nobody alive has ever seen. Vince Cable, it must be said, immediately pointed out that these plans are utterly impossible.

There appear to be many more costs to balancing the budget than not, especially when you have your own central bank and currency.

Forty percent of the cuts have been implemented with 60 percent to follow, which would likely have the same effect they did in 2010, quickly killing off a burgeoning recovery. A value-added tax (VAT) rise, which is highly regressive, looks almost inevitable, and the Chancellor refused to rule it out. The problem this time around is that monetary policy is in no position to ease the strain, with rates as low as they can go. In 2010 austerity was justified by the Coalition because they falsely claimed it was essential as the United Kingdom was close to bankruptcy and like Greece, neither of which was true, but Osborne didn't even bother to explain why more austerity was needed this time around. He inflicts pain on ordinary people just for fun; the Prime Minister called it "masosadism."

The economy appears to have already turned down, and reckless austerity again right now would be disastrous. As Robert Skidelsky wrote recently: "Cameron and Osborne cannot get it into their heads that if governments start cutting their deficits when the private sector is still shell-shocked by the slump, the policy will not produce growth but deepen the slump and slow down the 'natural' forces of recovery."

It really isn't obvious to me, and the Chancellor certainly hasn't explained why it is necessary to balance the budget at all, and certainly by some randomly chosen date that is close by. Even if you do go for balancing the budget, it is perfectly okay to do so over quite a long time period. Fifty or maybe even 100 years is probably a better time frame. Slow but sure wins the race. As Keynes said, in the long run we are all dead. There appear to be many more costs to balancing the budget than not, especially when you have your own central bank and currency. So balancing the budget by 2064 seems like a plan.

Paul Johnson, director of the Institute of Fiscal Studies, was scathing in his critique. "How do we get to this sunlit upland in which we have a budget surplus? Spending cuts on a colossal scale is how, taking total government spending to its lowest level as a proportion of national income since before the last war... it is surely incumbent upon anyone set on taking the size of the state to its smallest in many generations to tell us what that means."

Johnson went on to ask: "How will these cuts be implemented? What will local government, the defense force, the transport system, look like in this world? Is this a fundamental reimagining of the role of the state? One thing is for sure. If we move in anything like this direction, whilst continuing to protect health and pensions, the role and shape of the state will have changed beyond recognition."

But there was also quite a lot of rather muddled thinking. The Office for Budget Responsibility (OBR) in its Economic and Fiscal Outlook explained that tax revenues were down. The deficit is up since the March 2014 budget by £4.9 billion in 2014 and £7.7 billion in 2015–16. Business investment is down a lot in all years since the March forecast. At long last the OBR forecast for average earnings growth was chopped from 2.5 percent in 2014 to 1.8 percent and from 3.2 percent in 2015 to 2 percent, which still looks too high. Despite that, according to the OBR, households are going to ignore the decline in their earnings and keep on consuming, so household debt rises sharply as compared to the March forecast. If consumers start precautionary saving, as they should, to give themselves some financial cushion, GDP growth would be lower.

All of this depends on solving what economists call the productivity puzzle, which is why output has risen only a little, whereas employment has risen a lot, which means output per head has fallen. The OBR gives no explanation as to how, but assumes this puzzle is solved during the forecasts period, as if by magic. Why productivity takes off now when it hasn't for the last six years remains unclear. This is fingers-crossed forecasting.

The OBR's table 5.7 sets out what the United Kingdom would look like under what they call their weak productivity scenario as well as what I call their rosy scenario. They consider the implications of growth in actual productivity remaining at ½ percent, which was the average growth rate since 2008. The rosy scenario assumes productivity gradually rises to 2 percent by 2019. This assumption that the productivity conundrum is magically solved, the OBR says, "is the most important and uncertain judgment in our economy forecast." Of course it's also the forecast's greatest potential weakness.

These two outcomes, rosy and weak, are presented in the table [below]. In the central forecast the economy grows at an average of 2.3 percent in every year from 2014–15 to 2019–20. Debt as a percent of GDP falls from 80.4 percent at the beginning of the period to 72.8 percent at the end. The weak productivity scenario has markedly worse outcomes. GDP growth averages 0.9 percent, so is under half the rosy scenario. Starkly, debt as a percentage of GDP rises steadily to 86.6 percent by 2019–20. But this isn't my nightmare scenario, which could easily be much worse than that, given what happened when a dose of reckless austerity was released last time. 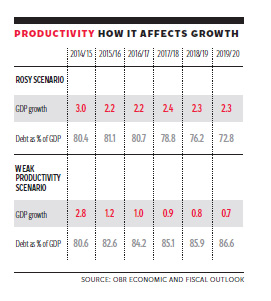 I stopped calling the Chancellor "Slasher" around 2012 after he eased off on austerity. Now, as suggested by one of my economic professor friends, he deserves a new nickname: Slashandburn. The British people need answers before the general election on what will be cut and when, so they know what they are in for if they are to vote for Slashandburn's cleaver. This was a preelection gift to Labor.

Will Boris Johnson Go Full Speed Ahead or Wobbly on Brexit?