We Know What Causes Trade Deficits

On March 31, President Donald Trump ordered a study of the causes of the US trade deficit that will focus on trade barriers and unfair trade practices in foreign countries. Economists, however, broadly agree that trade barriers do not cause trade deficits. A country can have a trade deficit only if it is borrowing on net from the rest of the world. Trade barriers have only minor effects on borrowing and lending decisions. They can reduce imports in affected industries, but they cause the exchange rate to appreciate to bring about offsetting changes in other imports and exports.

Massive purchases of US and other bonds by some foreign governments—a form of lending also known as currency manipulation—were the largest factor behind the record global trade imbalances leading up to the Great Recession, with fiscal deficits in some countries also playing an important role. At present, currency manipulation is only a minor factor, and imbalances are down from their peaks. The threat of future currency manipulation, however, may well be providing an implicit “dollar put” that has the effect of encouraging excessive private lending that supports the trade deficit.1 A US fiscal expansion, which some expect, is not appropriate at this point and would widen the trade deficit.

It is important to stipulate that trade is not a zero-sum game in which imports are losses and exports are wins. Trade in both directions carries abundant advantages, which  a forthcoming Policy Brief by Gary Hufbauer and Zhiyao (Lucy) Lu estimates to be worth around $2 trillion in additional income for the US economy (an earlier 2003 analysis estimated the amount at $1 trillion). Reducing the trade deficit by reducing overall trade would throw the baby out with the bathwater. Moreover, moderate temporary trade deficits are not necessarily a bad thing, as explained by Gary Hufbauer. Right now, however, the US trade deficit already exceeds a sustainable level and is poised to widen further in coming years. Action to narrow the deficit would be beneficial if it can be taken without harmful side effects. The key point is that action on the financial side will be more effective and less distortionary than action on the trade policy side, such as tariffs, duties, and quotas.

A series of research studies identifies the fundamental factors behind trade imbalances (Chinn and Prasad 2003; Gruber and Kamin 2008; Chinn, Eichengreen, and Ito 2011; Gagnon 2012; IMF 2012; Gagnon 2013; Bayoumi, Gagnon, and Saborowski 2015; and Gagnon et al. 2017).2 The most important factors include fiscal policy, intervention in currency markets, trend economic growth rates, per capita income levels, and prospective population aging. Barriers on financial flows have an important interaction with these factors; when financial markets are open, these factors generally have a larger effect on trade imbalances. Many studies focused on long-term factors, but business cycles may also be an important temporary factor. None of the studies found any role for trade barriers.

Figures 1 and 2 show little apparent correlation between average tariff rates or overall trade barriers and trade balances. If anything, higher tariffs are associated with lower trade balances (larger deficits). Including tariffs in regression analysis that controls for other factors yields an effect that is close to zero. Data for  overall trade barriers are not available for a long enough time span to include in the regression analysis. 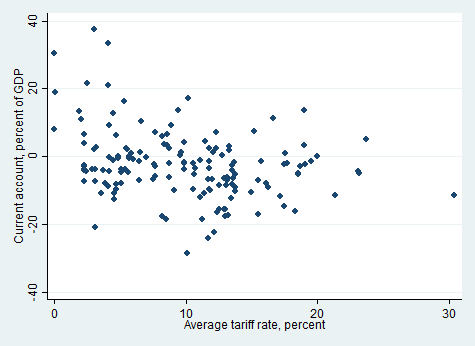 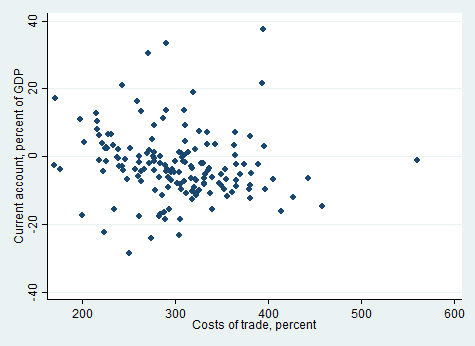 These results do not mean that tariffs and other trade barriers have no effects. Suppose the United States were to impose prohibitive tariffs or an absolute ban on steel imports. Total iron and steel imports in 2016 were $34 billion. These imports would drop to zero. The ban would protect US steelmakers from foreign competition. But a small appreciation of the dollar (just over 1 percent) would be sufficient to increase imports in other categories and reduce exports in all categories by the same amount on net.3 There would be no effect on the overall trade deficit. There would be a reduction in total trade (exports plus imports), and thus we would lose roughly a proportionate amount of the very large net benefits of trade.

Why would the dollar appreciate? The answer is that a steel tariff, in isolation, does not change household saving behavior or overall business investment (though it may shift across sectors as production rises in the steel industry and falls in other industries).4 The factors identified as influencing trade imbalances in the studies cited above share the feature that they operate through saving and investment. A trade deficit is an excess of investment over saving, whereas a trade surplus is an excess of saving over investment. The most important government policies influencing trade imbalances are fiscal balances and currency intervention. A higher fiscal balance increases national saving directly. Currency intervention consists of government borrowing at home to invest abroad with no net change in public saving or investment. The domestic borrowing raises interest rates, increasing private saving and reducing private investment at home, with opposite effects in the rest of the world. Figures 3 and 4 show that these policies do have important effects on trade balances. Note that an increase in the trade balance caused by either of these policies operates roughly equally through higher exports and lower imports with little effect on total trade and thus little effect on the net benefits of trade.

In a forthcoming book, Currency Conflict and Trade Policy: A New Strategy for the United States, Fred Bergsten and I show that at the peak of the global imbalances in 2007, essentially all of China’s trade surplus could be explained by China’s currency manipulation. At the same time, about 35 percent of the US trade deficit was explained by foreign currency intervention and another 25 percent by the US fiscal deficit. Going forward, the most productive policies for keeping the US trade deficit on a sustainable path are to prevent another outbreak of currency manipulation among US trading partners and to gradually reduce the US fiscal deficit. 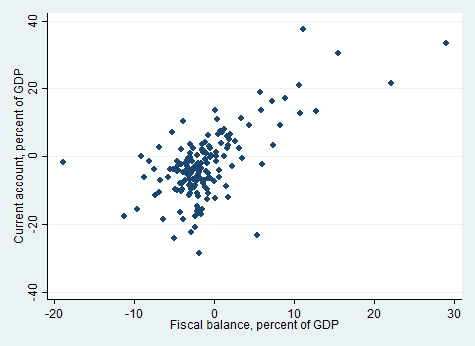 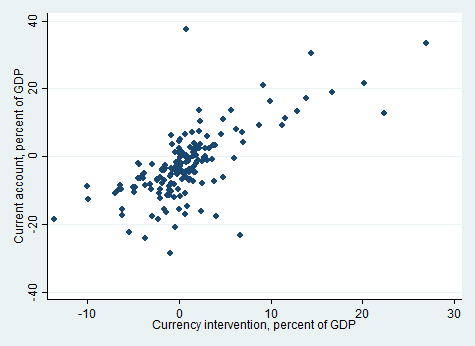 1. The implicit put option is that any future downward pressure on the dollar would spark currency intervention by foreign central banks that would allow investors to unload their dollars without taking a large loss.

2. The studies generally focused on the current account balance, which is the broadest measure of trade.

4. If the tariff were viewed by investors as a harbinger of a damaging trade war or generally bad economic policies, it might reduce inward investment in the United States, causing the dollar to fall and the trade deficit to narrow.

"It is important to stipulate that trade is not a zero-sum game in which imports are losses and exports are wins. Trade in both directions carries abundant advantages . . . "  No disagreement here, but exports have a positive multiplier effect, whereas imports have a negative multiplier effect.  I realize that everyone can't be net exporters.  Am I missing something?

You are both right and wrong to some extent.  The partial equilibrium answer is that net exports can boost output and even have a multiplier effect.  However, in the long run output should remain at potential and saving should increase or investment decrease to make room for higher net exports.  The adjustment works through interest rates, exchange rates, inflation rates, and macroeconomic policy responses.

I actually disagree with the general conclusion that only monetary tools affect trade. If the last 20 years have proven anything it is that balances are imminently changeable by policy actions, as long as we define policy actions very broadly and understand that some key assumptions can be significantly affected by such implicit policies. Typically they are not your typical trade barriers and are hard to account for in the models. Let me list just a few I have run into:

1) Economic Patriotism - buying foreign as a form of treason. Whole  populations can be in effect conditioned to think so - as seen in Korea and Japan or Germany and increasingly in China. It is the same illogic that drives a human being to suicidal decisions for the sake of larger polity. If the whole population behaves irrationally then many assumptions can break.

2) related to above - breakdown of relationship between interest rates  and savings - if savings rates persist no matter what interest rate then monetary transmission mechanisms can break down. I.e. Monetary methods to fixing trade deficit do not work well

3) state ownership/control - similar to point 1) - state enterprises can act for the overall state benfit at expense of rational decision making. A good example is China's state owned banking system which was incredibly good at neutralizing the effect of huge surpluses while avoiding controlling currency, inflation, inter est rates etc. Once again the assumptions break down since these actorsare not always rational (good to mention here the fact that monetary mechanism won't work if the country does not have floating interest rates, where funding decisions and interest rates are made by fiat, etc - and it is not necessarily China - same model was common in Japan until recently)

4) time to market - most economic models forget that in real world there is a significant lag in any reaction - sometimes as long as generation.  If a country subsidizes exporters to maintain export capacity when currency is strong then they can react when currency weakens, and the reverse if they all disappear/go bankrupt like much of US industry did when currency was stong, then likely weaker currency won't cause any magical growth in exports  that's why there are countries with persistent deficits and persistent surpluses  that can change but the change takes a lot of time

5) FX markets - that brings me the final point - FX as transmission mechanism - it simply doesn't work. They are impossible to predict and in case of developed economies do not really transmit the needed information. There are just too many factors involved and the best that can be said is that they actually truthfully reflect all the imperfections, violations of assumptions and outright manipulation.

I did not say only monetary tools affect trade.  First of all, I am talking about the trade balance not overall trade.  Second, monetary policy has very little effect on the trade balance.  The most important policies are fiscal and currency policies. Most of the points you raise affect the exchange rate not the trade balance.  For example, countries with a high degree of economic patriotism tend to have strong real exchange rates--their price levels are higher than otherwise. Do not make the mistake of thinking that the difficulty of predicting exchange rates means they have no effect.