The US-China trade war and the COVID-19 pandemic have jolted big multinational corporations (MNCs) that manufacture goods in China for export to the United States. Major companies like Omnidex, GoPro, Apple, Microsoft, and Google have either already shifted or announced plans to shift production of inputs in their global supply chains from China to Vietnam and/or Mexico, taking advantage of their low labor costs and proximity to the Chinese and US markets, respectively.

In 2019 US industrial pump maker Omnidex moved some production from China to Vietnam, and US camera maker GoPro added a new production line in Guadalajara, Mexico, for the US market, while maintaining its China operations to serve non-US markets. In early 2020, the outbreak of COVID-19 prompted MNCs to further accelerate supply chain diversification. About 30 percent, or 3 million to 4 million, of Apple’s classic AirPods wireless earphones will be produced in Vietnam rather than China. Google plans to manufacture its next generation smartphone Pixel 5 entirely in Vietnam. Microsoft is also planning to start producing its Surface line, including notebook and desktop computers, in Vietnam. Although current data on these trends are not available, such news reports imply that Mexico and Vietnam are going to be the next rising stars in global supply chains.

But will these MNC moves lead to a larger and deeper long-term trend? That remains an open question. Much will depend on how both countries emerge from the ravages of COVID-19 and other challenges. While Vietnam successfully contained the pandemic in the early stages, it must remain vigilant against a second wave. Mexico has to successfully contain the pandemic, which has worsened the security situation there. Both countries also have to contend with home-grown protectionism in major trading partners as the United States. To meet these challenges, they will need to adopt more trade- and investment-friendly policies and increase domestic investments in education and infrastructure to expand the pool of high-skilled labor and make their business environments more favorable to investors. 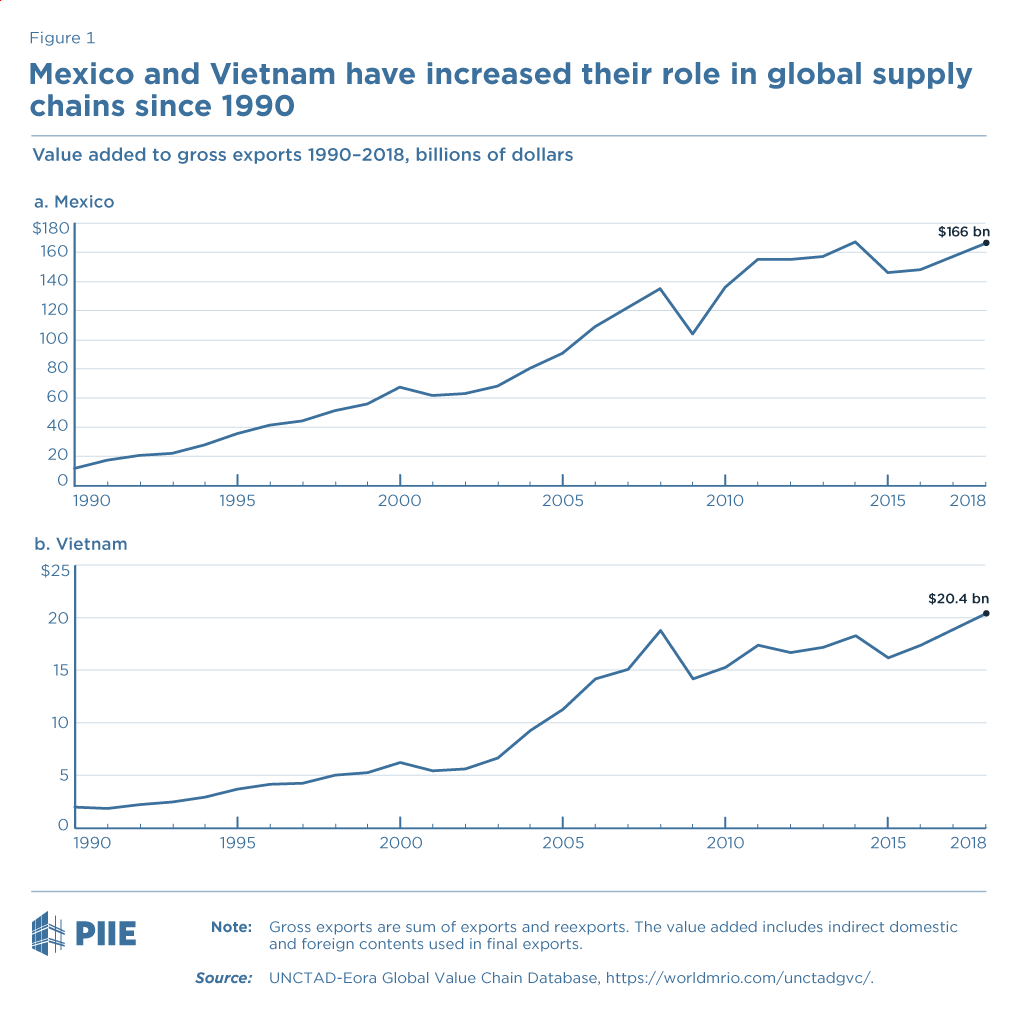 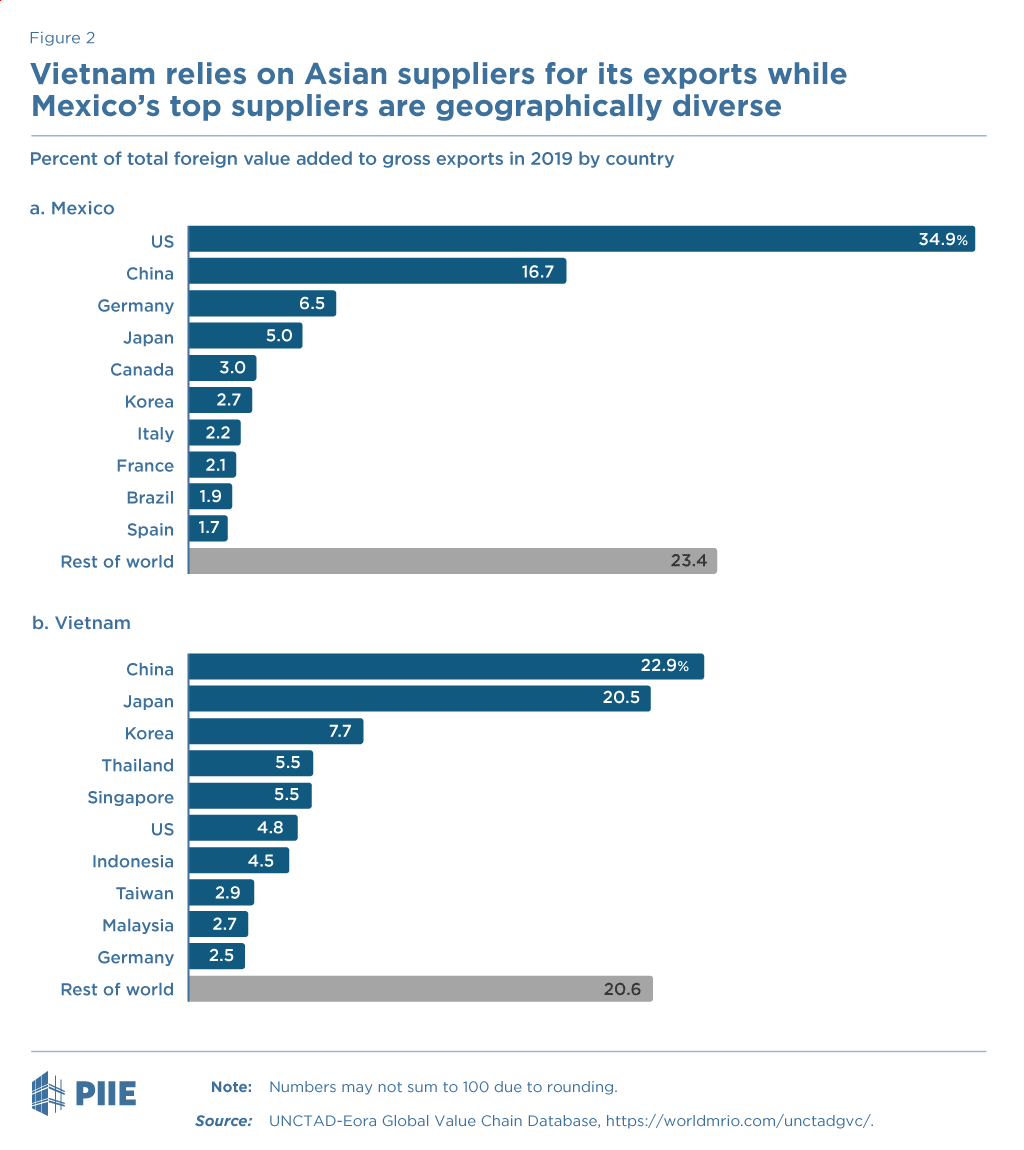 Firms will evaluate several characteristics of countries as they reconfigure their supply chains. The World Bank (2020) suggests that favorable factor endowments (e.g., natural resources and labor), together with market size, geography, institutional quality, and proactive policies, can all serve to enhance a country’s participation in global supply chains. Some of these features show what Mexico and Vietnam can offer foreign investors relative to China.

Low labor costs are the main attraction. Average manufacturing labor cost per hour in Mexico and Vietnam are estimated at $4.82 and $2.99 in 2020, respectively, compared with China at $6.50 per hour. Labor-intensive manufacturers seeking to diversify their supply chains could find Mexico and Vietnam quite attractive, although automakers may think differently about Mexico due to the new domestic labor value content requirement in the US-Mexico-Canada Agreement (USMCA), which replaced the North American Free Trade Agreement (NAFTA) in mid-2020.[1]

Over time both countries have sought to lower trade and investment barriers for key partners via free trade agreements (FTAs). Mexico liberalized its market via NAFTA (in effect from 1994 until USMCA replaced it), the Mexico-EU FTA (in effect 2000), and the Mexico-Japan FTA (in effect 2005). Meanwhile, Vietnam vigorously entered into bilateral and regional FTAs with most major trading partners except the United States, including the Vietnam-Japan FTA (2009), Vietnam-South Korea FTA (2015), and Vietnam-EU FTA (signed 2019). As a member of the Association of Southeast Asian Nations (ASEAN), Vietnam has an FTA with China (in effect 2005).

Thanks to trade pacts established since NAFTA, Mexico’s preferential tariffs on imports from FTA partners recorded about 0.1 percent in 2014 while Vietnam’s were about 5 percent or less in 2018, according to the World Bank’s World Integrated Trade Solution database. Vietnam provides foreign investors with easier access to its manufacturing sector than Mexico does (OECD 2018), but both score better than China on the overall Foreign Direct Investment (FDI) Regulatory Restrictiveness Index.

As members of the Comprehensive and Progressive Trans-Pacific Partnership (CPTPP, in effect 2018), Mexico and Vietnam would provide preferential treatment to firms from member countries looking to diversify their supply chains in the Asia-Pacific region. Active expansion of FTAs has allowed the two countries to serve new markets as well as reinforce existing trade relationships with trading partners. Both can attribute their increased participation in global value chains to lower tariff and investment barriers.

To truly capitalize on their potential, both countries have to considerably improve their overall business environment. Compared with China, both rank lower on the World Bank’s Ease of Doing Business Index. Mexico faces persistent domestic security problems and inadequate infrastructure. Vietnam needs to build more logistics-related infrastructure such as roads, railway and ports and strengthen trade facilitation by streamlining customs procedures. To move into high-tech global value chains, both will have to increase their pools of skilled labor via investments in education and training.

The COVID-19 pandemic poses a significant impediment as well. While Vietnam successfully contained the spread of the virus by imposing severe quarantine and social distancing measures at an early stage, it has suffered a significant blow due to weakened demand and reduced trade. Mexico had to shut down much of its production during a recent surge of the virus, which in turn halted production in the United States, particularly in the automobile sector.

Finally, Mexico and Vietnam face rising protectionism in the United States, Europe, Japan, South Korea, and Taiwan, which are undertaking or considering subsidies to induce firms to boost domestic production and reduce reliance on China. The two countries will therefore have no choice but to adopt trade- and investment-friendly policies, such as simplifying export and import processeses at the border and strengthening investor protection, to offset these “reshoring” policies of advanced economies.

1. The USMCA’s rules of origin require 75 percent regional content, up from 62.5 percent under NAFTA. About 65 to 75 percent of the steel used in cars, washing machines, and other steel-intensive products should originate in the region. And 40 percent of cars and 45 percent of trucks must be manufactured by workers who earn at least $16 per hour. Exporters can enjoy preferential treatment once they satisfy these rules of origin in the USMCA.