Trump’s Recipe for a Trade War

Updating Teddy Roosevelt, Donald Trump’s approach to foreign policy is “Speak loudly and carry a big stick.” In the case of China, Trump’s stick is a threatened 45 percent tariff on all US imports of Chinese merchandise.1 Using this threat, he promises to accomplish three goals:

At the January 14th Republican presidential debate, Trump’s opponents pointed out the fallacies of Trump’s strategy: China would retaliate, starting a trade war that would hurt American farmers and workers (Ted Cruz and Jeb Bush), and the tariff would be passed on in the form of higher prices to American consumers (Marco Rubio). Chiming in, John Kasich claimed that a streamlined antidumping system is the way to deal with China.

Before turning to the analytics, it’s worth putting a spotlight on Trump’s numbers. Table 1 shows US merchandise and services trade with China in recent years. Trump, like most politicians, appears to be unaware that US service exports generate millions of highly-paid American jobs. While the United States runs a merchandise trade deficit with China—$340 billion in 2015, not Trump’s claim of $505 billion—the United States runs a services trade surplus with China, around $30 billion in 2014.

Assuming that Trump’s threat of a 45 percent tariff could magically cause the bilateral trade deficit to disappear—in the best case solely by enlarging US exports to China to the tune of $340 billion, and nothing else in the multilateral trade picture changed (a virtual impossibility), what would be the plausible increase in US jobs?  Based on current relationships—about 5,800 jobs per billion dollars of exports—2 perhaps 2 million jobs would be added to US payrolls, not 4 million to 7 million.3

Turning to Chinese tariffs and taxes, while China certainly imposes trade barriers, its tariffs are a lot lower on average than most emerging countries, thanks to President Clinton’s hard bargaining as the price of admission for China to join the World Trade Organization in 2001. Table 2 shows average tariffs charged by the BRICS—Brazil, Russia, India, China, and South Africa. China charges the lowest average tariff among its emerging-market peers, though still higher than the US average of 1.5 percent.

As for taxes, the cornerstone of Trump’s complaint is the Chinese value added tax (VAT) of up to 17 percent, imposed on imports as well as domestic production. Unlike nearly all other countries, the United States has not adopted the VAT, which means that US exports pay VAT imposed abroad but US imports escape an equivalent burden. On this element of “unfairness,” Trump’s complaint is with the world, not just with China. It’s worth noting that Ted Cruz would bring US practice into line with other countries by exchanging the corporate tax for a business tax that is the functional equivalent of a VAT.

Until 2011, China manipulated the yuan, undervaluing its currency, thereby promoting exports and discouraging imports.4 It did this by acquiring huge foreign exchange reserves (mainly dollars) in exchange for yuan. Under pressure from the United States and other countries, China revamped its policies, allowing more room for market forces and reducing the role of the People’s Bank of China (the central bank) in determining the exchange rate. Table 3 shows the path of the yuan/dollar exchange rate and changes in foreign exchange reserves. In 2015, the People’s Bank actually spent foreign exchange reserves to support the yuan, countering market forces that would have pushed its value lower. In the presidential election of 2012, Trump’s criticism of China’s exchange rate policy might have been timely; in 2016, his criticism is outdated.

Putting Trump’s numbers aside, the larger point is Trump’s faulty analytics. Trump demonizes China for the US trade deficit, which ran $530 billion with all countries in 2015.5 The US trade deficit is with the world, not just China. If the United States imposed a 45 percent tariff just on imports from China, similar imports would soon arrive (at higher cost) from other countries—Korea, Taiwan, Indonesia, Malaysia, Thailand, and yes, Mexico.

The reason the US trade deficit threatens to escalate in 2016 is not unfair Chinese practices, but rather the strong dollar, as shown in figure 1. The dollar is strong both because the United States has the least-poorly performing economy among major players (“In the land of the blind, the one-eyed man is king”) and because the Federal Reserve has embarked on a policy of raising interest rates. According to William Cline’s estimates, every 10 percent rise in the exchange value of the dollar enlarges the US trade deficit by over $200 billion. No presidential contender wants to diminish the sub-par performance of the US economy as a remedy for the trade deficit. That leaves just one target for Trump: the Federal Reserve. “Demon Fed” does not carry the same soundbite ring as “demon China,” but analytically it is at least far more plausible. 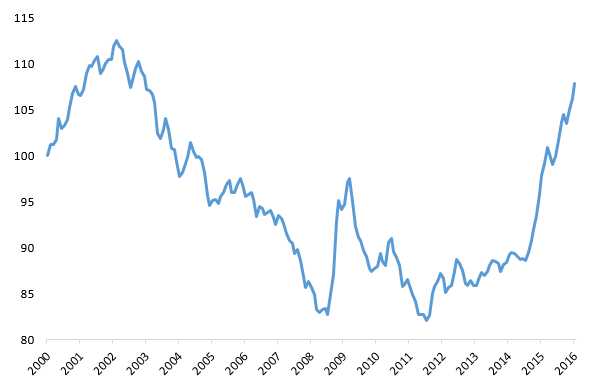 1. Trump initially suggested the tariff in an interview with the New York Times, but would later object to their characterization of his statement. Even so, Trump reaffirmed his view on taxing Chinese products in response to “unfair” treatment of US products and alleged currency manipulation.

2. The US International Trade Administration estimates that every $1 billion of exports supports 5,796 jobs.

3. Earlier work done at the Institute (see Bergsten and Gagnon 2012) found that currency manipulation had displaced between 1 million and 5 million US workers. Even our exaggerated estimate of 2 million jobs falls on the lower end of this spectrum because it is limited to the bilateral deficit with China, and because the number of workers associated with $1 billion in exports has fallen over the past several years. Moreover, the extent of currency manipulation is much smaller today than in 2012, and China can no longer be characterized as a “manipulator.”

4. According to William Cline’s work, the yuan moved rapidly towards its equilibrium value beginning in late 2011.