Trade-related Policy Priorities: A Memo for the Next Administration

MEMORANDUM ON Trade-related policy priorities for the next administration
To: United States Trade Representative

Background: US trade policy should ideally achieve several goals, including cooperatively working with other countries to reciprocally reduce trade barriers and further economic expansion for Americans. But as the current political debate suggests, US trade policy must be seen as serving America’s workers if it is to sustain public support. The Trump administration’s current approach of unilateralism and tariffs fails along each of these dimensions, including by neglecting workers. The World Trade Organization (WTO) and China may have disappointed the administration with some adverse rulings and actions, but both the WTO and China must be handled and not ignored. Trade should be a presidential priority, and the United States Trade Representative (USTR) must reestablish and maintain bipartisan support in Congress and with the American people to promote global engagement and US leadership.

Rebuilding trust with allies is a necessary first step to defining a common interest and action plan to ensure long-term cooperation in areas of joint concern involving China and the WTO.

The United States must begin by removing all bilateral tariff actions with economic allies. Eliminating costly retaliation facing American exporters will require removing the US tariffs on steel and aluminum, which impose needless costs on American metal-using industries and do little to protect America’s national security. It will require negotiating a durable solution with the European Union to the long-running disputes over subsidies to Boeing and Airbus. It will involve supporting the Treasury Secretary in Organization for Economic Cooperation and Development (OECD) negotiations on multilateral tax reform and to resolve concerns over trading partners’ digital services tax regimes.

The United States should unilaterally drop the artificial targets of the purchase commitments in the US-China “phase one” agreement, as these do not encourage trade liberalization or market reform. The failure to negotiate Chinese tariff reductions means the incentives for China to fulfill its commitments arise by its state-owned enterprises, and not its private sector, increasing purchases. The targets also encourage China to divert trade away from US allies, undermining multilateral cooperation. Finally, they have not worked (see figure). 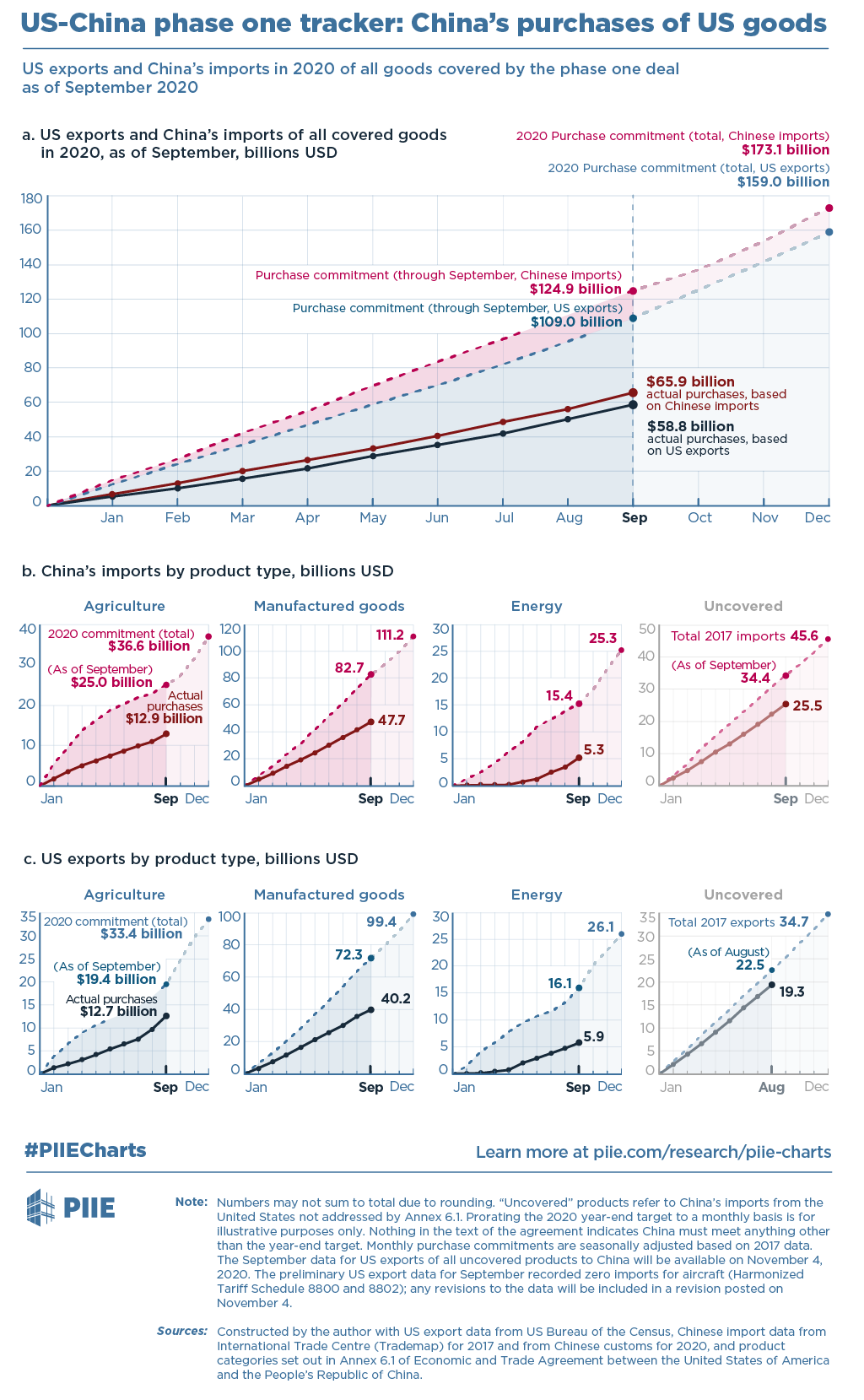 Ninety-five percent of the world’s customers, and most of America’s economic competitors, are outside of US legal borders. Despite its shortcomings, the WTO continues to provide the essential rulebook for US economic and commercial engagement with much of the rest of the world.

USTR must quickly prioritize negotiating improvements to the WTO’s core functions. That includes reestablishing a working WTO dispute settlement system to replace the Appellate Body. A fair and efficacious way of resolving trade frictions is needed to reduce current uncertainty over enforcement of international rules.

USTR should also prioritize negotiations with a limited, critical mass of countries over a smaller package of essential issues. These negotiations must address industrial subsidies, agriculture subsidies, fisheries subsidies, climate-related subsidies, electronic commerce, and services. Because of the global impact of such policies, these trade areas cannot be successfully negotiated in bilateral agreements.

Such negotiations can produce rules for industrial subsidies and state-owned enterprises beginning with progress the United States announced in January 2020 under the trilateral initiative with the European Union and Japan. Agricultural and fisheries subsidies can be informed by the WTO’s ongoing work program and OECD analysis. In support of rejoining the Paris Agreement on climate, USTR should also push global rulemaking to end fossil fuel subsidies and to permit appropriately designed renewable energy subsidies. Previous efforts in each area, as well as ecommerce and services, failed largely because they were each negotiated separately and in isolation.

USTR is critical to new domestic policy initiatives arising from the recession, the pandemic, and geostrategic conflict with China. The reality of cross-border supply chains and the potential costs of foreign trade retaliation means USTR plays an essential role in informing Congress and the executive branch’s interagency process about the fuller ramifications of US domestic policy. In a system governed by agreed upon rules, USTR must be able to mount a successful legal defense whenever US policy is subject to international challenge. That means supporting a domestic policymaking process driven by transparency, evidence, risk assessments, and cost-benefit analysis. From its origins, US policy should be designed for other countries to emulate, not retaliate against.

USTR should present a strategic approach toward supply chains and industrial policy.

The current administration has put forward reshoring proposals that are based on the presumption that cross-border supply chains curtailed US access to critical medical supplies during the pandemic. More detailed analysis must clarify where such arguments are and are not credible, and where reducing vulnerabilities may instead require more—and not less—international diversification with reliable countries, especially regional partners such as Canada and Mexico. Coordinating to pool risk, stockpile, and understand where reserve capacity is available in the case of demand surges are important, cost-effective strategies.

The geostrategic rivalry with China is triggering other calls for an American industrial policy to support production of goods ranging from semiconductors to critical minerals. Any new US subsidy programs should be consistent not only with existing rules, but with any new disciplines the United States is negotiating internationally. In general, future programs should identify and clarify the market failures or coordination failures that the policy needs to address. Any subsidies should be supportive of foundational and basic R&D and designed to improve industry-wide competitiveness.

Recent unilateral US export controls on high-technology goods and services to mitigate national security threats have significantly increased their trade coverage and triggered new channels of conflict even with allied governments. USTR expertise in trade, supply chains, and cooperative policymaking can help the Commerce and State Departments rationalize the most essential US export controls, while making these controls multilateral with other countries, so that any national security threat is both more likely to be mitigated and at a smaller economic cost to Americans.