Bernie Sanders has opposed every trade agreement that has been put before Congress since he was elected to it in 1990. Sanders and others on the left of the Democratic Party believe highly paid US workers cannot compete with workers in poor countries who earn much lower wages, and he is, therefore, unwilling to allow free trade between the United States and developing countries.

In 1994, to highlight his view, then congressman Sanders proposed a bill in the US Congress, which was about to pass the North American Free Trade Agreement (NAFTA). The bill provocatively called on members of the US Congress to show their solidarity with US workers by reducing their own annual pay to the $35,000 earned by their counterparts in the Mexican Congress.

Critics of the Trans-Pacific Partnership (TPP), a historic trade deal between 12 nations, base their opposition on similar grounds. Sanders points out that two of the TPP countries, Vietnam and Malaysia, have minimum wages that are the equivalent of 56 cents an hour. He argues that American workers should not have to “compete” against people forced to work under these conditions. This is not “free trade”; “it is a race to the bottom.”

This position on trade is troubling. Taken to an extreme, the United States would only trade with countries with wage rates similar to (or higher than) ours. This would prevent countries from following in the footsteps of countries, like Japan, South Korea, and China that have used trade as the lynchpin of their economic development strategies and raised many millions out of poverty. This worldview is also based on a fundamental misunderstanding of basic economics.

The reason American wages are so much higher than those in poor countries is not that US workers are inherently superior. Instead it is because they are more productive because of the advantages conferred by US economic institutions and endowments. Because their workers have higher skills, are better educated, work with more plant and equipment, have access to superior technologies, and operate in a system with better institutions and social capital, firms that are based in the United States can on average afford to pay their workers higher wages and still remain cost competitive. By contrast, average wages are low in poor countries because of poor skills, inadequate plant and equipment, inferior technologies, and often weak institutions. Given these disadvantages, only by paying low wages are firms in poor countries able to compete.

The strong relationship between average productivity and average wages is illustrated in figure 1, which shows data for average hourly labor compensation in manufacturing reported by the Bureau of Labor Statistics and uses per capita GDP to represent average output per worker in 33 countries. While the match between these two measures is not perfect, since hours worked per person could differ by country, the correlation between them is 0.93.

Figure 1 GDP per capita and average hourly compensation in manufacturing, 2012 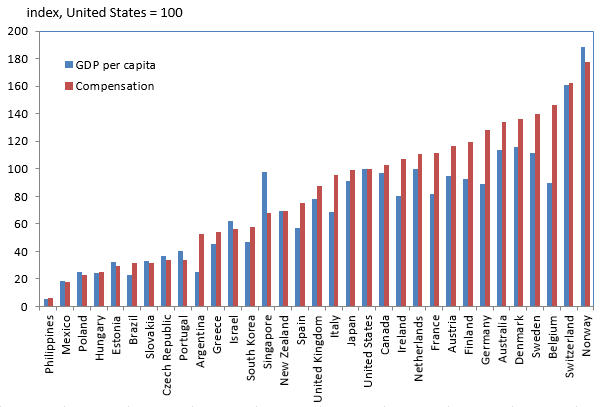 Mexican manufacturing wages are about a sixth of those in the United States; the relationship between US and Mexican labor productivity is the same. In 2012, for example, average hourly compensation in Mexican manufacturing was $6.36—17.8 percent of the average hourly compensation of US manufacturing workers of $35.67. Similarly, per capita income in Mexico was $9,560—18.2 percent of US per capita income of $52,530. The strength of the relationship is clear. Indeed if we plot the two measures against each other and fit a regression line to the data, we find the slope is almost equal to a 45 degree line showing that each 1 percent increase in relative productivity is associated with a 1 percent increase in relative wages and the regression can explain 87 percent of the variance.

It might come as a shock that judged by the average productivity of the Vietnamese economy, the minimum wage of 56 cents an hour that Senator Sanders seems to consider outrageously low and a reflection of Vietnamese workers’ lack of labor rights is actually higher than the $15 an hour minimum wage that he has ambitiously advocated for the United States. In 2012, GDP per capita in Vietnam was just 3 percent of GDP per capita in the United States. This means that the minimum US wage that would bear the same relationship to output per worker as the Vietnamese minimum wage would actually be 33 x 56 cents, i.e., $18.48 an hour.

In sum, Bernie Sanders and others who oppose free trade are shortchanging the competitiveness of US workers when they claim Americans cannot compete internationally with firms based in countries that pay lower wages. There are many industries in which they can, and they do. Indeed, if wage costs are all that matter for international competition, it is hard to explain how almost half of all US manufactured exports valued at almost a trillion dollars in 2015 were sold in low-wage developing countries. Yet once we recognize that in these industries, productivity more than offsets labor costs, the explanation is not hard to find.