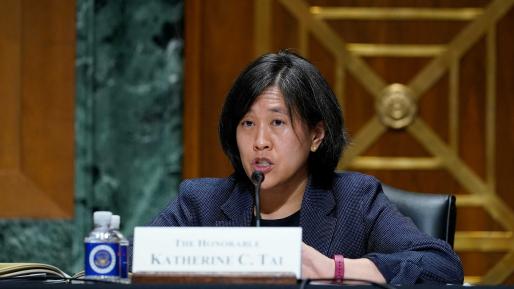 How US trade policy can support climate change goals

Responding to President Joseph R. Biden Jr.’s charge to Cabinet members to contribute to the effort to decarbonize the US economy, US Trade Representative Katherine Tai has put forward useful proposals on how trade policy can support solutions to global warming. While trade measures can complement essential domestic carbon mitigation efforts, they also can inhibit progress, if new restrictions are applied against green subsidies or in response to carbon border adjustment measures (CBAMs) coming soon from Europe and possibly others. Ambassador Tai will have to work closely with climate diplomats to ensure that the enforcement of US trade laws does not undercut international climate goals.

That US policy on climate change is no longer in denial is obviously welcome. At the Global Climate Summit in April 2021, the United States committed to reduce greenhouse gas (GHG) emissions by 50 to 52 percent from 2005 levels by 2030 and to achieve net zero emissions by 2050.

To mitigate GHGs, Ambassador Tai argued that the United States needs to develop “innovative environmental technologies, goods, and services” in areas such as clean energy and low-emission vehicles. She already has contributed in that regard by helping to broker the settlement of the intellectual property dispute on electric batteries between the South Korean companies SK Innovation and LG Chem that will allow the growth of US-based production by both companies.

Enforcement of US trade pacts also can help, Tai said, adding that her immediate agenda would focus on practical steps to “put a stop to illegal logging” and to develop global rules to address overfishing and marine litter. In addition, she supported Agriculture Secretary Tom Vilsack’s ideas on sustainable agricultural production—for example by expanding the use of cover crops.

The new USTR leadership deserves credit for advancing trade policy initiatives that align with US climate priorities. In recent years, trade officials had been barred from using the term “climate change” in trade negotiations—a policy sharply criticized by members of USTR’s private sector Trade and Environment Policy Advisory Committee—so Ambassador Tai’s climate speech was a welcome breath of fresh air. That said, however, her trade-climate agenda omitted key components of the trade agenda that can influence climate policy for better or worse. Here is a four-part trade-climate agenda that would reinforce and augment the climate initiatives that Ambassador Tai has proposed:

First, revive negotiations on the Environmental Goods Agreement. This pact, nearly concluded in December 2016 and dormant ever since, would promote the diffusion of green technologies by lowering trade barriers. In the near term, the pact should focus only on goods so that a deal might be reached by the time of the next World Trade Organization (WTO) ministerial at the end of November 2021 in Geneva. But the pact should include provisions that make it a living agreement, both by mandating regular updates of the product list of tariff-free goods and by extending the liberalization to environmental services.

Second, restore “carbon sinks” by negotiating trade obligations that protect forests and oceans (at least 25 percent of all CO2 emissions are absorbed by oceans). Trade policy measures can encourage reforestation efforts and ban the taking and trade of illegal timber. Other agreements can help safeguard the marine environment by banning subsidies to illegal, unreported, and unregulated fishing to deter overfishing; reducing marine litter; and mitigating GHG emissions from international shipping (indeed, the Biden administration has committed to work with other International Maritime Organization members to achieve net zero emissions from shipping by 2050).

Third, revise WTO subsidy rules to encourage investment in clean energy infrastructure and innovative research and development in renewable energy resources and carbon capture and sequestration (CCS) technologies. Consideration should be given to recreating rules comparable to the “green box” of permitted subsidies (in force during the first five years of the WTO) that delineated a “safe haven” from countermeasures for environmentally beneficial policies.

However, subsidies are a two-edged sword for the implementation of trade and climate policies. President Biden wants to boost US manufacturing and create US jobs, so he strongly supports the enforcement of existing US laws against subsidized imports. Tai did not mention green box subsidies, perhaps because they would constrain the use of antidumping and countervailing duties such as those applied against imported solar panels.

One area of subsidy reform that is frequently mentioned, but rarely acted on, is phasing out fossil fuel and ethanol subsidies—yes, ethanol is hailed as a renewable energy resource but its production is highly energy intensive, making it much less beneficial than other renewable resources. Committing to cuts in fossil fuel subsidies also is a priority for the Asia-Pacific Economic Cooperation forum this year. These are important reforms seemingly left off the US agenda.

Finally, exercise restraint on the introduction of carbon border adjustment measures or CBAMs. The immediate challenge for US officials is how to respond to EU proposals for imposing CBAMs, now expected in July 2021. EU border taxes could be imposed as soon as January 2023, though initially the EU policy is likely to cover only a few carbon-intensive products like steel and cement—not immediately threatening to US exports but sure to prompt loud complaints from China, India, and others. Extending CBAMs to manufactures will be more problematic and provoke new transatlantic frictions.

The rationale for imposing CBAMs, likely to prove attractive to politicians in many countries, is to “level the playing field” with countries that do not have “comparable” climate policies (or, in the EU case, that do not set a market price for carbon as is done by the EU Emissions Trading System). National policies to counter GHG emissions differ widely and involve a mix of regulation, subsidies, and tax policies. How does one assess comparability, or to put it another way, ensure that every country is doing its fair share in reducing GHG emissions?

Ambassador Tai will have to marshal her considerable legal and negotiating skills to resolve that complex of issues. What we do not need is a round of climate nationalism comparable to the vaccine nationalism that has burdened the global fight against the COVID-19 pandemic.

Will the New Climate Bill Damage US Energy Security?

Toward a Sunny Future? Global Integration in the Solar PV Industry