For example, Clyde Prestowitz of the Economic Strategy Institute asserted in the Boston Globe that “None of the trade agreements have eliminated [the trade deficit], or even reduced it, as promised…. The growth of the [US-Korea] deficit…represents the elimination of about 90,000 US jobs….” Leo Gerard, president of the United Steel Workers, argued that “NAFTA devastated US manufacturing,” and “TPP would further emasculate America.”

While all three arguments cited above can be questioned, we focus here on the contention that FTAs enlarge US merchandise trade deficits.

FTA opponents seldom acknowledge a fundamental relation taught in International Economics 101: Macroeconomic forces largely determine a country’s global trade deficit or surplus. The key forces are domestic levels both of private savings and investment and of government deficits. Added together, these levels give net national savings (or, when negative, net national borrowing), which determine the size of the national trade surplus or deficit. In another blog post we provide a longer description of the forces underlying deficits.

The Role of FTAs

Bearing in mind macroeconomic forces, we sympathetically interpret the argument of FTA opponents to mean that US accession to a trade agreement will enable the new partner to account for a larger shareof the US global trade deficit since, by the opponents’ hypothesis, the growth of the partner’s exports to the United States will exceed the growth of its imports from the United States. Even though macroeconomic forces largely determine the size of the global trade deficit, its division among trading partners is affected—according to this argument—by the presence or absence of an FTA with the United States.

Figure 1 tests this proposition. It depicts US merchandise imports and merchandise trade deficits. Bilateral trade statistics are much better for merchandise trade than for services trade; moreover, FTA opponents dwell on merchandise (mainly manufactures) to the unfortunate exclusion of services.1 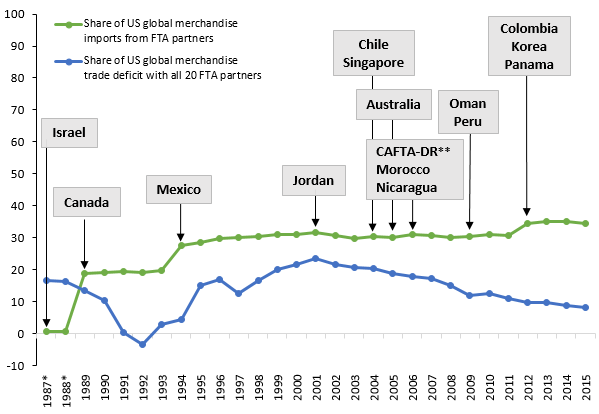 *Figure starts at 1987 as US global merchandise imports data before then are not available on the same basis. 1987 and 1988 data are from the US Census Bureau, and the share of US global merchandise trade deficit with all 20 FTA partners excludes Jordan, Morocco, Nicaragua, and Oman in these years because data are not available for these countries. Data for the remaining years are from the United States International Trade Commission (USITC).
**CAFTA-DR: Central American Free Trade Agreement–Dominican Republic. FTA partners include Costa Rica, El Salvador, Guatemala, Honduras, Nicaragua, and the Dominican Republic.
Sources: US Census Bureau and USITC, Interactive Tariff and Trade DataWeb.

The green line in figure 1 shows the share of US merchandise imports accounted for by US FTA partners as they joined, one by one, agreements with the United States. Back in 1987, only Israel had an FTA with the United States and provided under 1 percent of US merchandise imports. By 1989, following the Canada-US FTA, the share reached 19 percent; in 1994, NAFTA raised the share to 28 percent; and subsequent FTAs brought the share to 34 percent in 2015. FTA partners evidently account for a growing share of US imports.

FTA opponents often conflate China’s entry into the World Trade Organization (WTO) with US FTAs. To be sure, since 2001, when China joined the WTO, Chinese trade surpluses have accounted for a growing share of US merchandise trade deficits: 20 percent in 2001, 50 percent in 2015. But three facts must be stressed.

First, the United States does not have an FTA with China.

Second, to join the WTO, China had to dramatically liberalize its tariff and nontariff barriers.

Third, as its part of China’s accession bargain, the United States only committed to apply most-favored-nation (MFN) tariffs to imports from China. This commitment gave permanence to de facto US commercial relations with China in place since 1980, but it did not reduce US tariff or nontariff barriers.

These facts reveal that China’s growing trade surplus with the United States was not the result of US concessions, as typically happens in an FTA bargain, but instead reflected China’s rapid ascent as an industrial power owing to its own economic reforms. 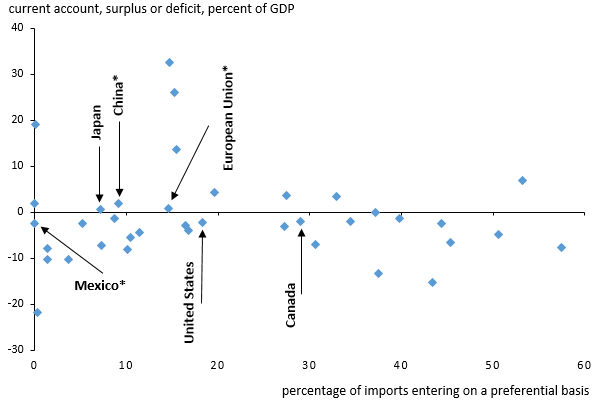 * Data for China and Mexico is for 2013 and data on the European Union are for 2012. Preferential imports data for these three countries/regions are calculated using the WTO’s Integrated Data Base (WTO-IDB); for other countries, the calculation is based on UN Trade Analysis Information System (TRAINS) database.
Note: Preferential basis refers to the percentage of imports entering at less than half of the most favored nation rate. This corresponds closely to trade within free trade agreements.
Sources: World Bank’s World Integrated Trade Solutions (WITS) database; authors’ calculation.

To summarize, contrary to opponents, US FTAs do not enlarge US trade deficits. Evidence both from US experience and the experience of 37 other countries strongly indicates that free trade agreements have no lasting impact on the size of national trade deficits or surpluses.

1. US exports of business services represent a large and growing share of US exports and typically benefit from FTA liberalization.

2. This text is adapted from Hufbauer, Cimino, and Moran, NAFTA at 20: Misleading Charges and Positive Achievements, Policy Brief 14-13, May 2014, Peterson Institute for International Economics.

3. The technical term for trade surpluses and deficits is “current account balance,” a concept that covers trade in goods and services, plus other current transactions, such as remittances.

4. The 20 percent figure cited here differs from the 34 percent figure cited earlier because not all imported products from each FTA partner have an effectively applied rate less than half of the MFN rate—the cutoff point for preferential trade in the WTO database. For example, the United States imported 2,229 products from Australia (based on HS 6-digit level classification), but only 1,295 products entered at a rate less than half of the MFN rate. Thus, only these 1,295 products’ import values contribute to the United States’ preferential import share in the WTO database.

Trade Balances and the NAFTA Renegotiation