After nearly 20 years of negotiations, the European Union (EU) and the four founding members of the customs union Mercosur (Argentina, Brazil, Paraguay, and Uruguay)[1] have reached an agreement to lower trade barriers, sending a signal to the world’s protectionists that increased economic cooperation and integration can benefit all sides. The accord underscores the EU’s willingness to make trade concessions at a time when the United States is threatening to get into a trade war. The four Mercosur countries are betting that they too can benefit from increased trade cooperation. The accord is thus an important accomplishment for both parties.

Following some 40 negotiating rounds, the two sides agreed to strong trade disciplines and made market access concessions. The EU will liberalize 95 percent of products, covering 92 percent of its imports from Mercosur. Mercosur will fully liberalize 91 percent of products, covering 91 of imports from the EU (see table 1). In both cases, transition periods of up to 10 years will apply, with longer time periods for more sensitive goods. For products not fully liberalized, additional market access will be provided through tariff-rate quotas. Important concessions for Mercosur countries include the elimination of tariffs on goods like orange juice, instant coffee, and fruits and increased and/or improved access via tariff-rate quotas for beef, poultry, pig meat, sugar, ethanol, and other products. The EU will get greater access in the four South American countries for manufactured goods, some of which face high tariffs, such as cars and parts (35 percent), machinery (14 to 20 percent), and chemicals (18 percent), and also for European agricultural products like dairy (28 percent) and wines (27 percent). The EU expects this trade deal to be its most lucrative to date, with about €4 billion saved in tariffs. Firms will also enjoy improved access to services and government procurement markets in both blocs. In all cases, effective implementation will be critical for the agreement to deliver on its promise.

The negotiations that led to these breakthroughs followed a rollercoaster path. The EU repeatedly balked at Mercosur’s ambitions for greater market access for its competitive agricultural products, while Argentina and Brazil resisted the EU’s requests for opening their industrial (and agricultural) markets cushioned from competition by the customs union’s high barriers. Governments were unable—or unwilling—to tackle the special interests representing these sectors.

On the EU side, while the usual suspects (France, Ireland, Belgium, and Poland) opposed increased access for Mercosur’s beef and sugar, Spain and Germany led other countries to support concessions that would result in a significant agreement. Part of the EU’s motivation was to expand its network of trade agreements to defend against the fallout of the US-China confrontation. As with the recent entry into force of the EU’s deals with Canada and Japan, the agreement with Mercosur guarantees that, in case of disruption of the global system, EU trade would continue to be governed by rules-based trading frameworks and enjoy preferential access. Beyond trade issues, the EU also wanted to make sure that all Mercosur countries would remain part of the Paris climate change accord.

While not without challenges, pro-market governments in Argentina and Brazil were able to confront the automotive and agricultural sectors and search for new economic opportunities at a time of slow growth and investment in the region. The Juncker Commission, which moved the negotiations to a closing stage, had little time left as its current term runs until October 2019. So did President Mauricio Macri of Argentina, who wanted to secure a deal before his country’s elections in October.

The EU-Mercosur agreement still needs to be ratified by the national parliaments of all Mercosur countries, as well as by the European Parliament and EU Council; it might also require approval of national parliaments of EU members should it be considered a mixed-competency agreement. Approval will present challenges for both parties. Opposition has already been voiced by affected sectors on either side; a lengthy process could bring complications associated with potential changes in governments in the South American countries. But the deal has significant potential for both parties, which comprise a combined population of 760 million people and a quarter of the world’s GDP, making it the largest trade accord for each of them. For Mercosur, it is its first deal with a developed partner and also its first deep trade agreement,[2] which further strengthens its commitment to a global trade agenda. With total goods trade amounting to €88 billion ($99.3 billion) in 2018 (see figure 1), the EU is Mercosur’s second biggest trade partner in goods (see figure 2); with an accumulated stock of investment of €381 billion ($430 billion) in 2017, it is the largest investor in Mercosur. From a geopolitical perspective, the EU-Mercosur agreement serves both parties well as they navigate turbulent global trade waters. 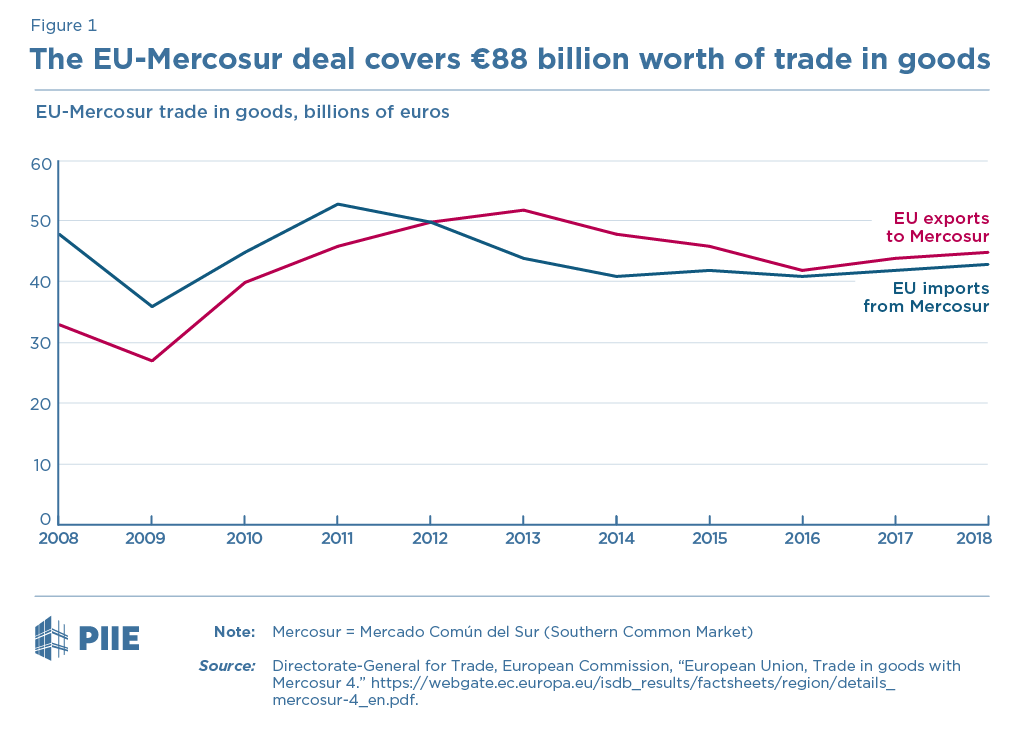 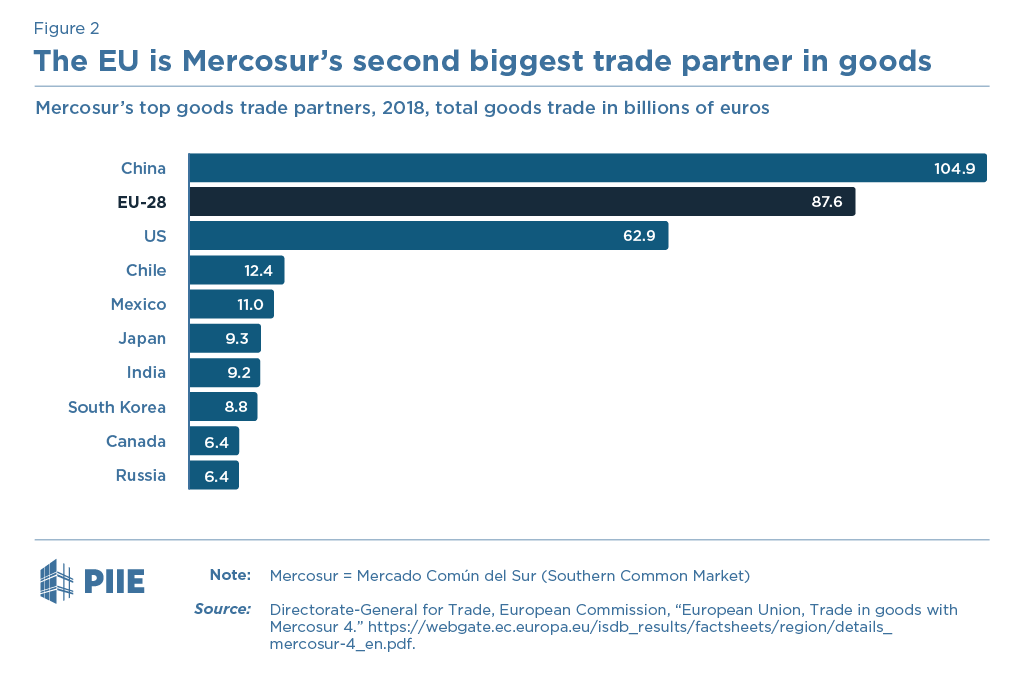 The benefits of the EU-Mercosur agreement could spread to the rest of Latin America, a region that has made some progress in liberalizing and boosting intraregional commerce. For example, trade within Central America drives growth in countries otherwise afflicted by serious problems. The Pacific Alliance, encompassing Chile, Colombia, Mexico, and Peru, has brought some important innovations, like promoting regulatory convergence in industrial products. Also, negotiation of deep trade agreements among many Latin American countries and between them and advanced economies like the United States and the EU has contributed to open trade and investment regimes. A Latin American free trade agreement, however, has escaped the region.

A regionwide free trade agreement would constitute a market worth about $5 trillion or approximately 7 percent of global GDP, sizable enough for producers to reap the benefits of specialization and scale. Moreover, it could underpin a broader strategy to support integration of Latin American firms into global markets. Reducing trade costs, removing nontariff barriers, and opening of trade in services would also be critical to foster regional value chains.

For such an accord to materialize, however, the largest countries in the region need to share a common trade policy vision, which has not been the case so far: Brazil and Argentina favor inward-looking policies and maintain high tariffs relative to Mexico, which favors a more open trade strategy (see figure 3). 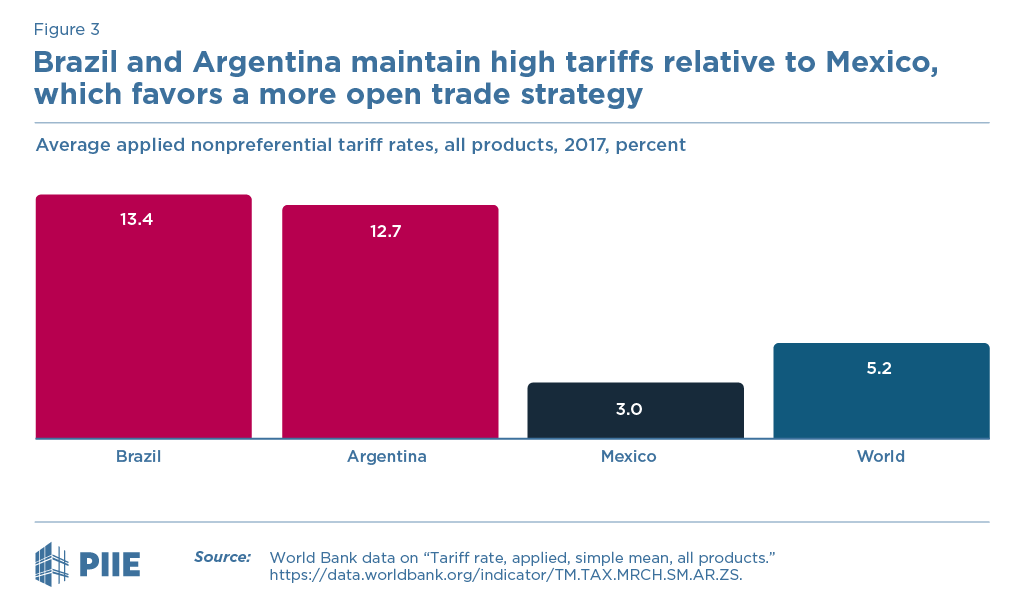 If approved, the EU-Mercosur agreement could bring greater trade openness and stronger trade disciplines to South American countries, aligning them with their neighbors in the Pacific Alliance and Central America and facilitating further Latin American trade cooperation. Confronted with increasing challenges, Mexico may be more willing to look south. But nationalist trends would need to be overcome. Greater trade cooperation could not only strengthen Latin America’s ability to compete in international markets, but it would also protect the region from rising global trade frictions.

1. Mercosur stands for Mercado Común del Sur in Spanish, or the Southern Common Market. Venezuela joined Mercosur in 2012 but was suspended from membership in 2017. The protocol of accession of Bolivia to Mercosur was signed in 2012 but approval is pending in all Mercosur countries.