Do Multinationals Pay Their Fair Share of Corporate Income Taxes?

The widely shared perception that multinational corporations (MNCs) are evading their fair share of taxes gained new political legitimacy recently with the endorsement of Christine Lagarde, managing director of the International Monetary Fund (IMF). There is, however, considerable evidence[1] that US-based MNCs—including digital giants—actually pay corporate tax on par with other US firms. Lagarde based her view on an IMF study that found the system riddled with inconsistencies. The IMF study contained policy recommendations, some constructive but some ill-advised.

The policy prescriptions are offered in the IMF’s report titled Corporate Taxation in the Global Economy (discussed at a PIIE event with Lagarde and IMF authors). It proposes four options to reshape or even euthanize the current corporate income tax (CIT). The IMF’s two euthanasia methods deserve the most praise: a minimum tax approach and turning the corporate income tax into a destination-based cash flow tax (DBCFT). Because the corporate income tax enjoys wide popularity, for bogus reasons discussed in a moment, finance ministers should retain the name but reshape the structure as they design corporate tax policy for the next century.

The corporate income tax, as now structured, ranks high among taxes that distort economic behavior—a proposition well known to students of public finance. Economic output lost from taxing corporations often approaches revenue collected by the Treasury. Yet the corporate income tax has enjoyed enduring, if waning, popularity for more than a century.

Voters support the corporate income tax for two reasons that do not stand the test of economic logic. The first was ridiculed in rhyme by Senator Russell Long (D-LA): “Don’t tax you, don’t tax me, tax the fellow behind the tree.” For voters, the corporate tax is attractive because they think it is taxing someone besides themselves. At the same time, high CIT rates have spawned special deductions, credits, and subsidies, intended to attract firms and create jobs—but fostering still more distortion.

“Tax the rich” is the second specious justification. Taxing corporations gets its support from voters who think it’s a tax on the rich. To the extent that’s true, the corporate income tax is a very haphazard way of accomplishing that goal. Rich people often stash their assets in trusts and partnerships that escape the corporate income tax. Moreover, through pension plans and charitable institutions, corporate shares are owned by households and institutions that are not particularly rich. The way to tax the rich is through personal income taxes, not business taxes. Left-leaning politicians who bemoan US inequality can learn from Sweden, a true socialist country, but one with a 21 percent corporate tax rate and a maximum personal rate of 62 percent. In fact, most advanced and large emerging economies have personal income tax rates that are higher than their corporate income tax rates.

IMF economists know all this. Yet their report offers the smallest genuflection to economic learning. So buried are IMF misgivings about the current CIT structure that hasty readers might imagine a subtitle, “Save the Corporate Income Tax!” But the report, penned in studiously neutral language, goes far beyond defending the current corporate income tax and in fact offers useful messages to finance ministers.

The debate on this subject often overlooks the fact that corporate income tax rates have drifted downward since 1990. This is a healthy trend, not cause for criticism. The trend is not, of course, the result of legislators taking night courses in public finance. Rather, international tax competition for good firms and good jobs deserves the credit. While tax rates have declined, corporate tax revenues, expressed as a percent of total tax revenues, have remained about the same—illuminating how the corporate tax base expands as tax rates decline. 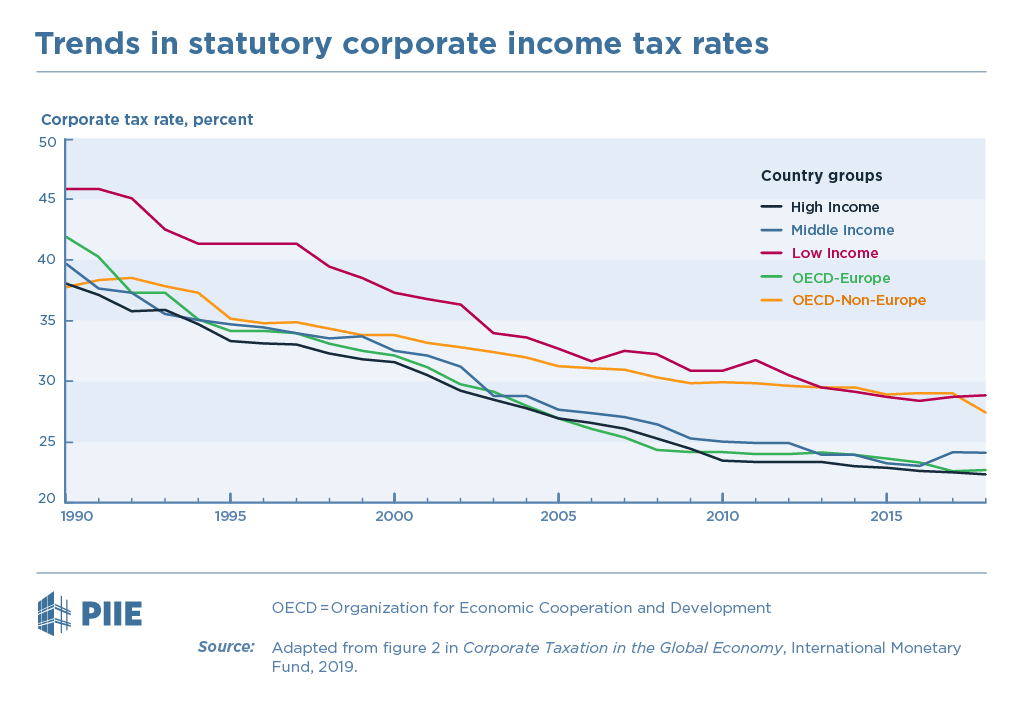 Looking to the future, the report illuminates the dangers of uncoordinated digital taxation. Proposals such as a digital services tax that may violate international trade and tax rules abound in Europe and have even reached Australia. Finance ministers are eager to grab a slice of revenue from the likes of Apple, Google, and Facebook. The report wisely warns that conflict, chaos, and double taxation are likely to result from these money grabs in the absence of international agreement on new rules.[2]

The bland prescriptions for euthanizing the corporate income tax are the most revolutionary, and the most valuable, feature of the IMF report. It outlines two promising methods.

Euthanasia through minimum taxes. Corporate tax rates are now low—21 percent in the United States (after the tax cuts enacted in 2017) and Sweden, 19 percent in the United Kingdom, 12.5 percent in Ireland. These rates sharply reduce distortions associated with traditional corporate income taxes, where rates in the 40 to 60 percent range were once common. One advantage of the minimum tax approach is that it would fit within the existing corporate tax structure. A second advantage is that it would offer legislators a far less distortive alternative in their quest to create jobs than targeted deductions, credits, and subsidies. And low rates, coupled with measures designed to reach mobile income (such as the US penalty for global intangible low-taxed income penalty—GILTI), discourage profit shifting. But there is no reason that international competition could not drive CIT rates still lower (or business subsidies still higher). To prevent that outcome, an international accord is badly needed that sets a floor on minimum corporate tax rates. Otherwise, at some point, countries will need to make up tax revenue through personal income taxes or value-added taxes (VAT). While that might make good economics, it would guarantee very difficult politics. Few countries are willing to compensate for the loss of corporate tax revenue through higher VAT or personal income tax rates.

Euthanasia through a destination-based cash flow tax (DBCFT). The DBCFT is designed to tax domestic consumption. It does this by exempting exports, allowing an immediate deduction for capital expenditures, and disallowing any deduction for imports. Essentially, DBCFT turns the corporate income tax into a VAT with a wage subsidy, since wages are deducted from the DBCFT tax base, but not from the VAT tax base. If the US corporate income tax, for example, were restructured as a DBCFT at the same 21 percent tax rate, it would raise some revenue, since the United States runs a large trade deficit, but not a lot of revenue. However, if the wage deduction were eliminated from the DBCFT, the new tax could raise a great deal of revenue, or the tax rate could be much lower, and the DBCFT would be compatible with existing World Trade Organization (WTO) tax rules.[3] The US Congress debated and rejected a business tax system akin to the DBCFT in 2017, but that need not be the last word for other countries—or, indeed, for the United States. In any event, pages 25 to 31 of the IMF report, explaining the DBCFT, make for essential reading.

The way forward. The IMF will soon host an expert forum to discuss global coordination of corporate taxation. It would be unfortunate if the assembled experts waste much time on two nonstarter approaches covered in the report. One approach is to use a formula to divide the MNC tax base between the countries where the parent firm and its subsidiaries operate. Formula apportionment appeals to academics, but after decades of trying, neither US states nor Canadian provinces can agree on common formulas for dividing the tax pie within their national borders. The result is often double taxation. Why would anyone think that a common formula can be agreed among sovereign nations?

Even less promising is the prospect of sharing the residual profits tax base between sovereign nations by an agreed formula. Residual profits are conceptually defined as the excess of MNC earnings over normal profits. Many long meetings would be needed to define “normal” and “residual” profits, and more and longer meetings to agree on a common formula.

Rather than pie-in-the-sky formulas, experts should concentrate on structural changes in the current corporate income tax, following the pragmatic methods laid out in the IMF report—floors on minimum corporate tax rates and the DBCFT. The name “corporate income tax” should be retained, in deference to popular opinion, but distortions associated with the current structure can be substantially reduced.

After the First World War, League of Nations experts established principles for dividing the corporate tax base between sovereign nations. These principles have averted double taxation of business income for a century. In turn, this has enabled MNCs to flourish, spreading trade and investment across the globe. The IMF forum should display equal foresight as it charts corporate taxation for the next century.

1. See Lessons for US Business Tax Reform from International Tax Rates and Digital Companies and Their Fair Share of Taxes: Myths and Misconceptions.

2. Fortunately, the US Treasury has awakened to these threats. Prodded by the Senate Finance Committee, Chip Harter, a Treasury tax official, declared, “What we have seen of the most recent French proposals, we view them as highly discriminatory against U.S. businesses.... Various parts of our government are studying whether that discriminatory impact would give us rights under trade agreements, WTO, treaties.”

3. Will Martin properly emphasizes this point. See Trade and economic impacts of destination-based business cash-flow taxes published in the World Economy in May 2018 (abstract available).

Surprised? US Multinationals Didn't Repatriate a Gusher of Cash