Partially abetted by the Trump administration’s demonization of China over the COVID-19 pandemic, there has been widespread fear that vital exports of Chinese personal protective equipment supplies to the United States would disappear. The European Union worried that China’s outbreak might lead to supply disruptions. Newly released Chinese customs data indicate, however, that there was a drop but not as precipitous as feared. Chinese exports of essential hospital supplies did decline in the first two months of 2020, as expected, but only by 15 percent. And the factors behind the dip were complex, and not simply a case of China hoarding the equipment for itself or retaliating against the Trump trade war.

The latest evidence provides a small ray of sunshine given massive global shortages of masks, hospital gowns, and other personal protective equipment. In the same vein, the New York Times has reported that China is now producing 116 million masks a day, 12 times its supply prior to the outbreak. Chinese billionaire Jack Ma is flying  protective face masks to Europe and the United States. The Chinese government has offered to export protective equipment to Italy and other countries.

But these hopeful results should not relax pressure on national and local governments around the world to provide urgent financing to amp up domestic production of key medical supplies as the pandemic spreads and needs grow.

As the coronavirus spread globally in February, many countries feared their medical workers would suffer shortages of crucial equipment to treat the growing number of patients. With demand spiking in China, reports on conditions there stoked more concern, given how important it is as a global supplier of hospital gear. Take five pieces of personal protective equipment (PPE) critical to the fight against COVID-19.

China provided 43 percent of world imports of face shields, protective garments, mouth-nose-protection equipment, gloves, and goggles in 2018 (figure 1). China is a major supplier collectively and of each of the five products individually. 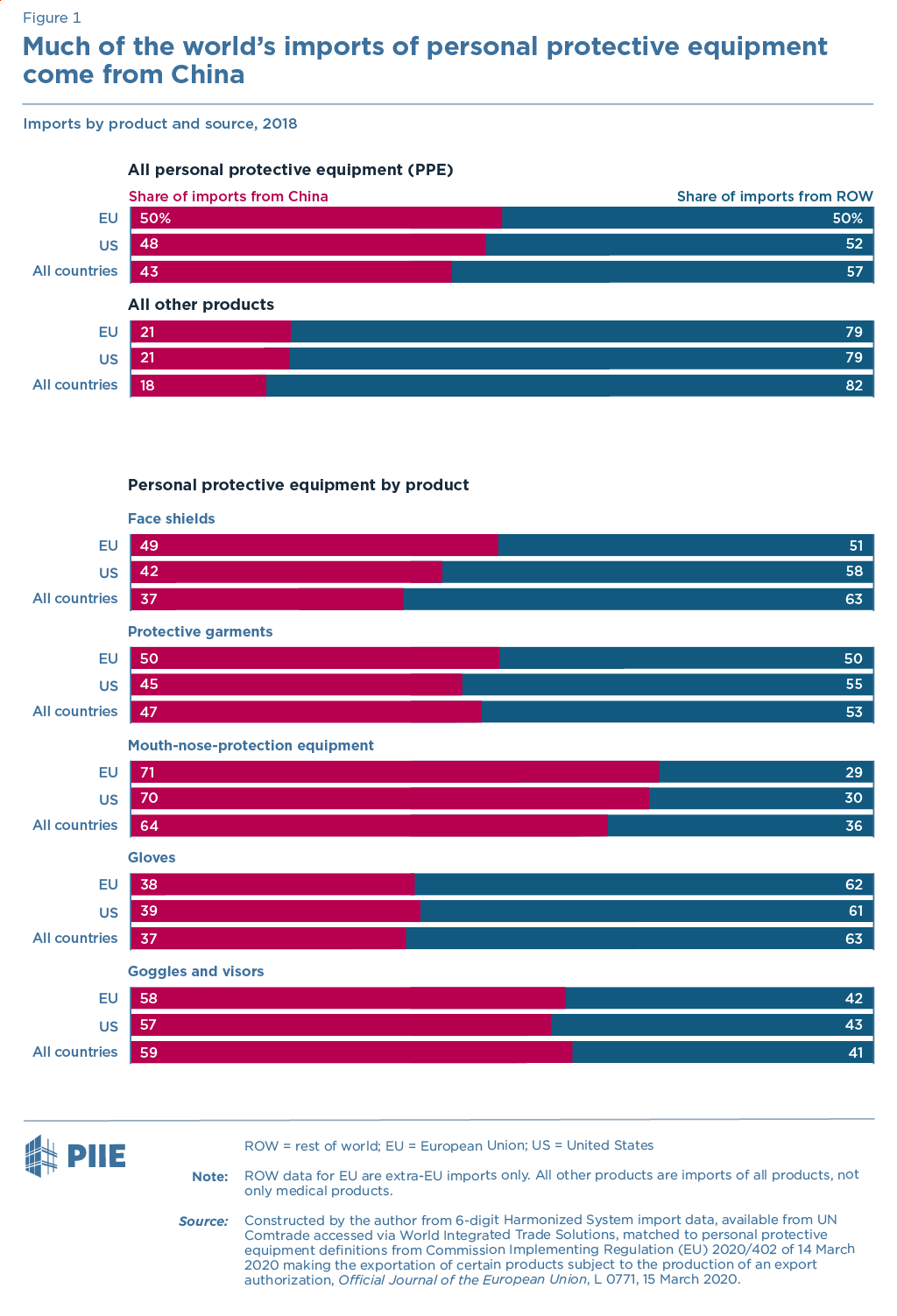 Many countries also produce these medical gear locally. But as a share of imports, China is a major player. China was the source of 50 percent of EU imports of these products from outside the bloc in 2018, including as high as 71 percent of EU imports of mouth-nose-protective equipment. Similarly for the United States, China was the source of 48 percent of imports of PPE in 2018, providing 45 percent of US imports of protective garments. For the EU, the United States, and many other countries, imports of these critical supplies could have been disrupted if China’s exports had shut down in early 2020.

With the outbreak in China, many expected a sharp decline in Chinese medical exports

In January and February 2020, as the coronavirus spread in China, the rest of the world feared being cut off from critical Chinese supplies just when they would be needed the most. Two factors fueled fears of a massive decline in Chinese exports of medical equipment to the world.

Chinese demand for such products spiked sharply due to the outbreak. China erected entire hospitals from scratch to treat COVID-19 patients. Clinics in Guangdong Province alone conducted 320,000 tests, the World Health Organization mission to China over February 16–24 reported. A Chinese demand increase meant fewer PPEs would be left over for export.

Second, despite the Chinese government officially refuting media reports on March 5 that it had banned exports of medical supplies, fears lingered. China had issued a record number of “force majeure” certificates to allow its companies to break contracts, including with foreign suppliers. One worry was some of these certificates were granted to medical suppliers to cater to local needs.

A third factor weighed in favor of China’s ability to continue to export. At a State Council press briefing on March 6, the Chinese government indicated it had managed to scale up Chinese production of some key hospital supplies, noting its daily output of protective clothing had increased from “less than 20,000 pieces in the early stage of the epidemic to the current 500,000 pieces. N95 masks reached 1.6 million from 200,000, and ordinary masks reached 100 million. The production capacity of other materials and medical treatment equipment is also greatly improved.”

Nevertheless, it remained unclear how much earlier that Chinese production had expanded and what the impact of increased production would have been on China’s exports.

China’s exports of personal protective equipment fell in early 2020, but not as badly as feared

According to official Chinese customs data released on March 25, Chinese exports of PPE to the world declined by only 15 percent in the first two months of 2020, relative to the same period in 2019 (figure 2). Notable is that China’s exports of these medical products declined less than the rest of its exports to the world, which fell by 17 percent during the same period. 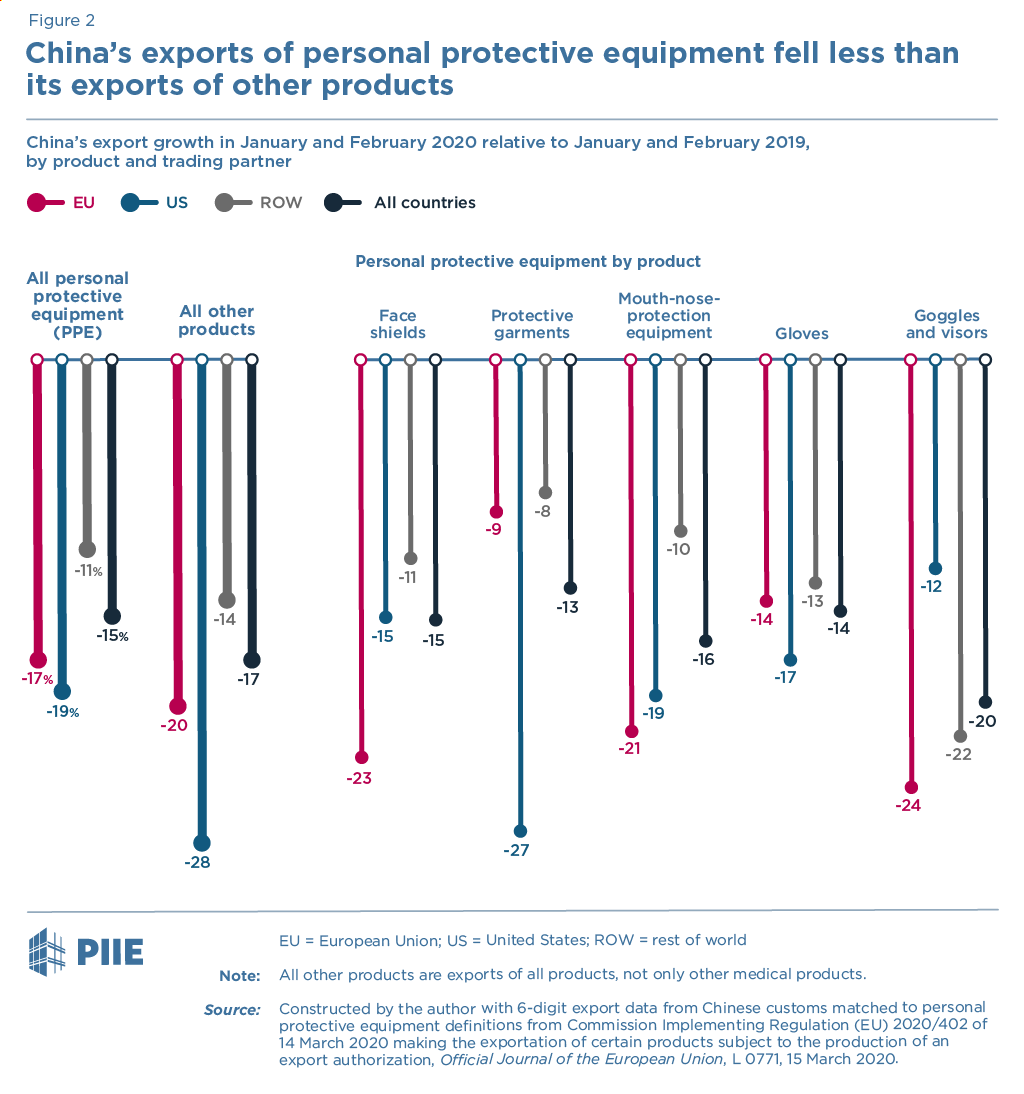 Compared with the EU, a bigger decline in Chinese exports to the United States was expected, given President Donald Trump’s new tariffs on billions of dollars of Chinese medical supplies in 2019. It was not until March 10 and 17 that Trump finally agreed to lift tariffs from many of these products.

In terms of specific products, China’s exports to the world of goggles and visors as well as mouth-nose-protective equipment declined by more than 15 percent; exports of protective garments and gloves fell by less than 15 percent. Sales to the EU dropped the most for goggles and visors (24 percent), whereas for the United States the biggest decline was in sales of protective garments (27 percent).

This is not all positive, and there are three important caveats. The massive increase in demand from Europe, the United States, and the rest of the world being hit by the COVID-19 pandemic meant import demand jumped. Where available, the evidence supports the idea that import volumes for these products dropped slightly more than import values, and export prices increased with the spike in demand abroad.[1]

Third, China also took some of the global supply of these products off the market by increasing its imports. While it was still a major net exporter, China’s need for medical supplies more than doubled its PPE imports during this same period.

The United States, Europe, and rest of the world need to step up local production of medical equipment. More Chinese exports are also needed. But the worst fears, that China was potentially halting medical supply exports, do not seem to have materialized.

These data will hopefully make policymakers rest easier that China indeed did not impose an export ban in January and February cutting off supplies of critical medical equipment to the world. The European Union and others should feel some relief about future access to medical imports and consider lifting their dangerous export restrictions earlier than the late April date at which they are currently set to expire.

And hopefully President Trump will dismiss requests like the one from Representative Doug Collins, to ban exports of US medical equipment, as well as proposals from White House trade advisor Peter Navarro that the United States should forbid hospitals from importing these critical supplies from China or wherever else they can import from. Forcing medical providers to spend extra time and money searching only in certain domestic locations for vital equipment, where such supplies may not exist, will result in higher prices and waste the precious resources they need to devote to treating COVID-19 patients.

In a small positive sign on March 25, the trade ministers of seven countries, including Canada and Australia, committed to keeping markets open and cross-border supply chains moving, affirming “the importance of refraining from the imposition of export controls or tariffs and non-tariff barriers.” More such commitment and policy actions are needed, especially from leaders of major economies like the United States, European Union, and China.

The world’s COVID-19 patients and medical experts need their policymakers to allow vital supplies and equipment to flow unimpeded from one country to another, wherever needed, as the crisis continues to evolve. Global cooperation is the only way countries can minimize the devastation COVID-19 is leaving in its path.