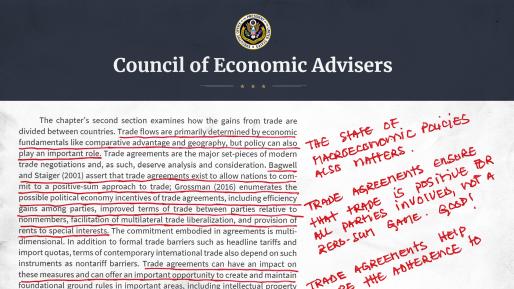 The Annual Economic Report of the President, Annotated and Explained

The latest critique of President Trump's trade policies has arrived. And it comes from the president himself. Monica de Bolle marks up Chapter 5 in the 2018 Annual Economic Report of the President, and explains where it rebuts the central tenets of Trump's trade strategies by extolling the virtues of trade, not just surpluses, and spells out in clear economic terms why negotiating free trade agreements to force balanced trade won't work.

The United States has about the same weighted average applied tariff rate as most of the world's ten largest economies (1.6 percent), with Brazil, India, and China the only ones at higher rates. The United States cut tariffs sharply after World War II as it worked with trading partners to lower their barriers and establish rules to prevent a repeat of destructive trade wars in the 1930s. Under this system, the United States benefits when countries join it under the WTO or free trade deals because this tends to require more liberalization from other countries than from the United States. For instance, under the North American Free Trade Agreement (NAFTA), Mexican tariffs went from simple average tariffs of 14 percent to zero percent, whereas US tariffs went from 6 percent to zero percent. But if the United States were to leave NAFTA, as Trump has threatened, Mexican tariffs on US exports would revert to relatively higher levels.

Including China in the global trading system was a step forward because China, a nonmarket economy, agreed to play by the world trading rules the United States wrote. But it has violated some rules, such as stealing intellectual property rights, and previously manipulated its currency to promote exports.

Trade Has Produced Costs as Well as Benefits

Like technology, trade promotes efficiency in business and results in net gains to the economy, but some are hurt in the process. Trump's threats to withdraw from trade deals (NAFTA, Korea–United States Free Trade Agreement or KORUS) or impose trade barriers (tariffs on steel and aluminum) ignore the wider implications for the US economy and instead focus on protecting select groups of workers.

The implication that benefits of trade accrue only when exports equal imports is wrong in theory and based on the record. In fact, total trade growth adds to the US economy, not just exports. Trump repeatedly ignores the benefits of imports, like cheaper inputs to US companies, and better prices and more selection for consumers.

Scholars differ over the extent to which imports, especially from China, have displaced US jobs, increased inequality, and slowed wage growth. They largely agree that technology is a bigger factor in these phenomena, however.1

These are laudable goals. Abandoning trade deals hurts Americans too through missed opportunities for US exports. When Trump withdrew from the Trans-Pacific Partnership (TPP), the United States forwent an estimated $131 billion in annual income gains, or 0.5% of GDP. In fact, now it faces a $2 billion loss in income because it will be disadvantaged in those countries' markets.2

Trade as a Whole Has on Net Increased Economic Growth

How Gains from Trade Are Divided It is great to recognize that trade agreements help to create rules for fair trade. These rules have enabled the United States to repeatedly challenge unfair practices in other countries. Trying to reduce bilateral deficits by renegotiating trade agreements is futile. The US current account deficit with other countries results from macroeconomic policies, like the huge federal budget deficit, which is likely to rise further with tax cuts and increases in spending.

Trade Patterns Can Affect the Division of Gains

Displaced workers in the United States receive very little public assistance to find new jobs—less than virtually all other advanced economies.3 Instead of putting up trade barriers and giving up those wider benefits to the US economy, the country could help all displaced workers by investing in education, expanding unemployment insurance programs and tax credits, and making sure people have continuous access to health care.

Trade Leaves Both Nations Better Off

Trade deficits can actually be the result of strong economic growth: When Americans have more purchasing power they will consume more, including from other countries, raising imports. The biggest recent decline in the US trade deficit occurred during the Great Recession. Trade works best, not when there are no deficits, but when each country exports what it makes best and imports what other countries make best. It's called comparative advantage, as the report duly acknowledges!

The investor-state dispute settlement provisions (ISDS) in trade agreements help to protect property rights of investors in foreign countries, to prevent them from seizing or nationalizing businesses in violation of US rights. The US administration is currently trying to gut these protections in NAFTA renegotiations.

Economy Has Shifted Away from Manufacturing

This is a welcome acknowledgement of the importance of services. It's a US "comparative advantage." Trump never mentions that. In past decades, manufacturing was the most important sector for the US economy. Today services are equally, if not more, important. Services now account for a majority of US economic activity and five times more jobs than in manufacturing. Business service jobs, which make up almost a quarter of all jobs, pay an annual average of $56,000. Manufacturing jobs make up about 10 percent of all jobs and pay $46,000.4

How Can a Country Afford to Run a Trade Deficit?

Sustainability of a Country's External Position

If you want to know why Trump's strategy of forcing lower trade deficits won't work, read this!

Trump is selling his own country short by ignoring the United States' strength in services—like insurance, banking, and tourism. Investing in education and training for highly skilled jobs will help Americans excel even more.

This explains why Trump and his trade officials should reconsider their primary strategy of negotiating trade deals to lower bilateral trade deficits. The United States has helped to build the WTO into a respected enforcer of trade rules, much to Washington's advantage. US victories in adjudicated cases far outweigh losses.

Trump wants to "protect national security" by slapping steel and aluminum tariffs on all trading partners (except Canada and Mexico). So why is he punishing Europe, Japan, and Korea—the most important US military allies on whom the United States will have to rely in a national security emergency? This may undermine the rules-based system that the United States helped to create to prevent trade conflicts.

Notes have been edited to fit the screen. Here is the fully annotated document from Monica de Bolle. Follow @bollemdb on Twitter.

1. This study concluded that the productivity gains from technology caused 83 percent of the manufacturing job losses between 2000 and 2010, while trade accounted for only 13 percent. Hicks, Michael, and Srikant Devaraj. 2015. The Myth and the Reality of Manufacturing in America. Muncie, IN: Ball State University Center for Business and Economic Research. Recognized studies led by economists David Autor, David Dorn, and Gordon Hanson found that Chinese imports were responsible for less than 20 percent of manufacturing job losses from 1999 to 2011.

3. Out of all Organization for Economic Cooperation and Development (OECD) countries. Chad P. Bown and Caroline Freund, Why the United States Needs Active Labor Market Policies: Lessons from Other Countries, forthcoming.

Trade Balances and the NAFTA Renegotiation