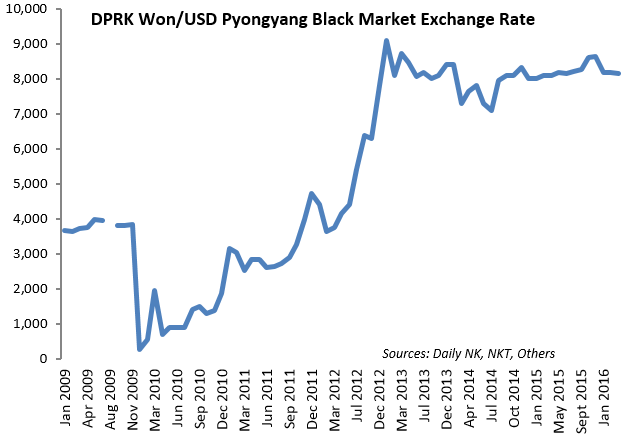 Some commentators have ventured that this was due to improvement in the balance of payments associated with the rise of exports to China, while others have speculated that the authorities were actually engaging in auctions of foreign exchange to maintain this relative stability.

But this is an empirical issue. If the sanctions bite, then one would expect to see their effects manifested in the black market rate on the won. So we decided to offer up this conundrum to the wisdom of the crowd, or at least of our readership, in this Witness to Transformation Black Market Contest. Yes, you can ply your wits against North Korean loan sharks and black market traders. Or maybe the North Korean monetary authorities. Here’s how it works.

Steph thinks that within two months, evidence of the impact of sanctions should begin to emerge. So the object of the contest is to guess the black market won-dollar rate two months hence. Since the sanctions resolution passed 2 March, we will use the first DailyNK average rate applying to the post-2 May period as the reference. So you have the next month to analyze trade data, contact spies in Dandong, or call in favors in Switzerland to inform your estimate. Whoever guesses closest to the May black market rate wins. In the event of a tie, whoever submitted their entry first wins.

Please list your estimate in the comments section below. The entry period closes 15 April.

To get you started, the most recent average black market won-dollar rate published by the DailyNK for last week was 8,150 won to the dollar; the February pre-sanctions rate was 8,200 (i.e. according to this data, the won strengthened slightly after sanctions were imposed).

The winner receives an autographed copy of Hard Target: Sanctions, Inducements, and the Case of North Korea. We have a contract with Stanford University Press, so this book will be forthcoming, inshallah. Now get on the phone to Dandong and get those entries in!