Update on the North Hamgyong Floods

In the immediate wake of the massive flooding in North Hamgyong late last summer, North Korea made various appeals for aid to the international community, UN and even South Korea. The UN responded with a multi-agency disaster assistance strategy with a price tag of $29 million. As is often the case—but particularly with respect to North Korea—this got whittled down, with total resources mobilized as of late November at about $12 million and $5 million of that was from the Central Emergency Response Fund (CERF) in effect internal money. China also put in $3 million bilaterally and Russia stepped up too. Nonetheless, as NKNews documents, the funding of UN appeals has dropped from about half of total requests in 2014 to only 17 percent in 2015 before rebounding to 26 percent last year.

In November, a team consisting of nine UN and affiliated organizations made a five-day tour of the affected areas to monitor the damage and reconstruction efforts; they have now released a full report on their findings. We are unclear of the degrees of freedom the mission enjoyed. The team did visit three of the most affected areas—Yonsa, Musan and Hoeryong City—but not Onsong, which was probably the most severely affected.  And interviews were conducted under the shadow of North Korean officials which almost certainly dampened any complaints. Nonetheless, the report still provides the most complete information we have on the floods and reconstruction to date.

According to the mission’s estimates, 600,000 people were “affected” by the floods, 140,000 “severely.” The report estimates that around 30,000 houses were damaged, 27,000 hectares of agricultural land submerged, and almost 70,000 people were completely displaced. The mission saw signs that reconstruction was occurring noting efforts in strengthening river embankments and rebuilding roads as well as other infrastructure. According to DPRK government figures over 3,000 new buildings have been constructed for almost 12,000 families since early September, when the flooding was at its worst. In classic corvée labor fashion, some 370,000 people—including 140,000 soldiers—were mobilized to support the effort.

The report divides the assessment into five sectors: health and nutrition; water, sanitation, and hygiene; education; food security and agriculture; and shelter and non-food items. The report notes some successes, including with respect to building new structures and aid delivery. But as always, it is the subtle commentary—and outright silences—that require reflection. A handful of points: 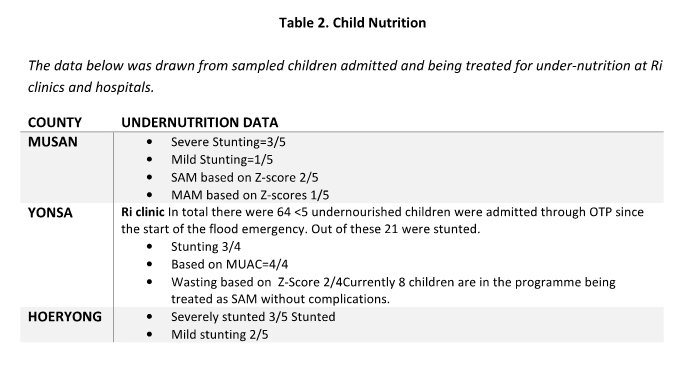 Such disasters would represent serious messaging dilemmas for other governments, but the North Korean leadership benefits from being able to compartmentalize the news. On the one hand, they are able to assure citizens outside the affected areas that their respected leader alone appropriately addresses their needs. In Kim Jong-un’s New Year’s Address he called the effort a success (although he did not tour the flood-affected region). On the other hand, North Korean authorities recognize their own unpreparedness to deal with disasters and therefore periodically seek large external aid packages, despite a very clear lack of commitment to resolving the underlying issues themselves. A week after the devastating floods hit North Hamgyong, and in the midst of trying to rally international aid donors, North Korea conducted its fifth nuclear test. No wonder we are seeing aid fatigue.