Slave to the Blog: North Korea and the Borderlands

Figuring out what North Korea and others are up to in the borderlands with China is a perennial NK Witness challenge. But it’s also where all the action is and where I turn to today. Quite fortunately, we’re not the only ones looking at the area.

38 North, which has a sleek new website, and which now counts North Korea Economy Watch and North Korea Leadership Watch as affiliates, released an article last week on China-North Korea energy cooperation. Curtis Melvin and Joseph Bermudez Jr.’s article uses satellite imagery to analyze progress on two new power plants along the Yalu river border and Jagang Province, one of the most isolated in North Korea. Western tourists and diplomats are still banned from the region, and as Melvin and Bermudez note, some of the energy will likely be diverted to military factories in the region. Progress on the factories has been slow but as the article suggests, this is likely due to commercial and financial issues, not a broader Chinese throttling of Sino-North Korean projects. Whatever the case, China continues to move forward on energy cooperation with the North.

But there may be some rifts in Sino-North Korea energy cooperation. Gas prices in the North continue to be high after the sharp price increase following China’s threat to clamp down on oil exports to Pyongyang a few months ago. In other commodities, Daily NK also reports that there have been increases in the prices of flour, sugar, rice, and pork. (See their coverage here and here). But as can be seen in our monthly “the sky is not falling on the North Korean economy” graph below, the uptick in the rice price is nothing extraordinary and the USD to North Korean won rate remains very stable. 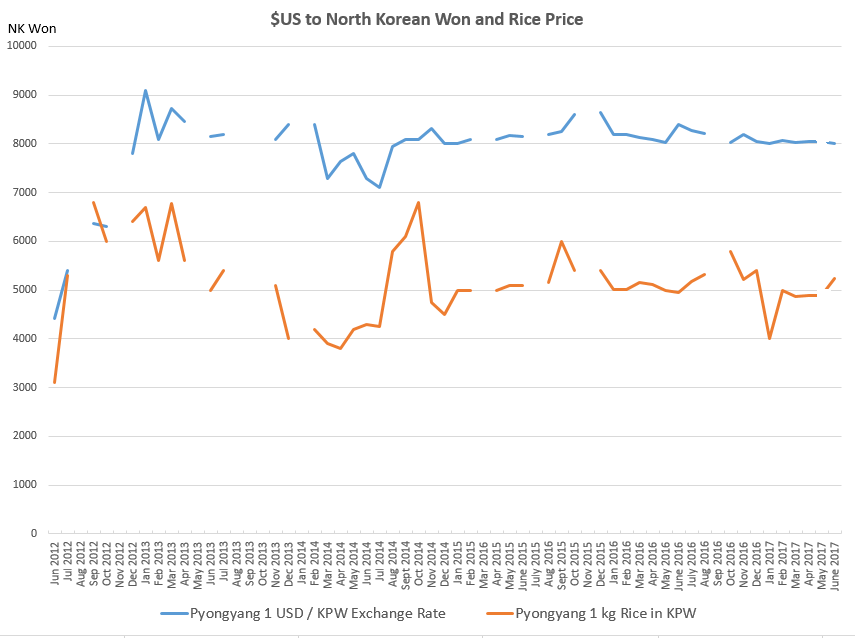 Finally, anyone looking for business opportunities in North Korea? Last week, Josh Stanton blogged about the Delegations for Dialogue, a young outfit that “provides future generations of leaders the opportunity to engage directly with issues at the heart of international affairs.” In August, Delegations for Dialogue will be hosting a Trade and Investments workshop where participants visit Beijing and Yanji, and then attend the Rason International Trade Exhibition, visit Rason factories, and even open a local bank account. Stanton faithfully notes where the promoted activities run afoul of international sanctions legislation.

But if investment in North Korea isn’t your cup of tea, later in August, Delegations for Dialogue has an educational exchange/tourism program in North Korea that probably doesn’t violate sanctions, at least not yet. Although looking at the itinerary, it suggests that participants will be taking a ferry from somewhere in North Korea to Seoul, which would require Ministry of Unification approval. But bigger question: are there any takers?