Public Opinion on North Korea from the Chicago Council on Global Affairs: No Evidence of Decoupling

Amidst the escalatory rhetoric, Dina Smeltz and Karl Friedhoff have some new data on public opinion on North Korea from the Chicago Council on Global Affairs. Even before recent events, it reveals a predictable rise in concern, some predictable partisan differences, but also scant evidence of the “decoupling” risk that strategists tend to fret about. Perhaps the most surprising result: there is more support than I would have thought for military options, even if not a majority.

Not surprisingly, concern over North Korea's nuclear program has trended up steadily from 55% in 2015, to 60% in 2016, to the current 75%. The ICBM tests have clearly gotten public attention. Second, Republicans are more hawkish than Democrats, but not overwhelmingly so. For example, large majorities of the overall sample favor imposing tighter sanctions both on North Korea (76%) and on Chinese firms doing business with North Korea (68%), but with Republicans only slightly more tough on each question than Democrats (84-76 and 75-68 respectively).

On kinetic options, Republicans are more open to the possibility, with fully 54% supporting airstrikes on “nuclear production facilities”—an environmental nightmare—and 37% even supporting sending troops to take them out (Democrats were at 33% and 24% on these two questions).

Democrats were more fatalistic that the issue would be finally resolved, with 26% willing to accept a weak freeze deal (more precisely, “accept that North Korea will possess nuclear weapons in exchange for producing no more”; only 17% of Republicans support this deal). Overall, though, America’s can-do attitude was evident in the fact that only 11%—and almost the same in both parties—was willing to throw in the towel and just “accept that North Korea will produce more nuclear weapons.”

The most comforting finding was evidence of increased support for the alliance. This is exactly the opposite of the fear that the US would think twice about defending the South in the face of a nuclear North. It also suggests that President Trump’s idiosyncratic views of the Asian alliances during the campaign have not dented public support; to the contrary.

Given the way the question is asked, the support for South Korea is shockingly low: whether respondents would “favor or oppose the use of US troops if North Korea invaded South Korea.” The onset of the prolonged second nuclear crisis in 2002-3 saw an uptick in support for deploying troops if South Korea were attacked, but it then hovered in the low- to mid-40s through 2015; perhaps candidate Trump was onto something with his alliance-fatigue lines. Support for deploying troops has now leapt to 62% in the case of conflict, and support for Moon Jae-in—hardly a household name—stands at 54%. Although not definitive evidence against the decoupling hypothesis, it suggests that Kim Jong-un’s possession of a nuclear weapon, and even an ICBM, hasn’t weakened support for the alliance but rather strengthened it. 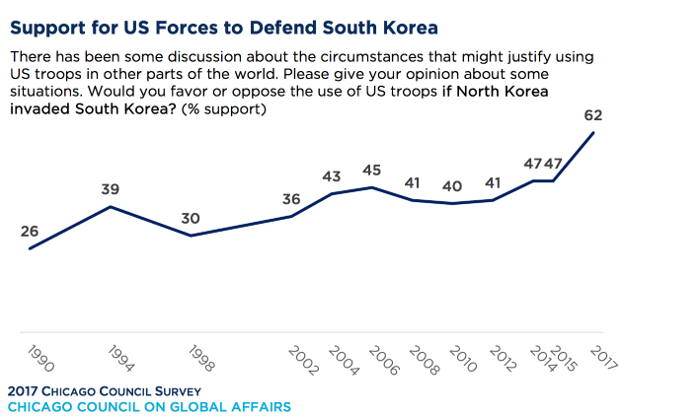 Public opinion polling has obvious limits. The answer to the same question will be markedly different depending upon how you ask it. In this case, a majority came out for defending our ally because of course that sounds like the proper thing to do. Had you instead asked the population if they would risk a nuclear strike upon Chicago in order to defend South Korea I suspect the answer would be quite different. We must also keep in mind that the population at large probably thinks that North Korea cannot reach the US yet. Remember even after the ICBM tests Lindsey Graham was talking about war exclusively "over there," and I don't expect average people to be more informed than some of our senators.

the mainstream press always frames the issue in the context of how should we stop these scary guys who are threatening us. they ignore the fact that north korean "threats" are always bragging about how they will RESPOND to attacks by the USA. north korea has never attacked anybody, in contrast to decades of aggression by the USA.

the best way to avoid north korean ICBMs is to leave them alone.

the western anti-PRNK propaganda is ugly and pervasive.

Mr. Sloper's understanding of history is extremely flawed given that it was North Korea that invaded the South in 1950 setting off the Korean War that produced the current armistace.  It also ignores dozens of attacks involving armed force, from special forces attacks on South Korea's Blue House, submarine insertion of commandos in the late 1990s resulting in about 30 killed NK soldiers; shelling of loud speakers over the DMZ AND the sinking of the Chonan in 2010.