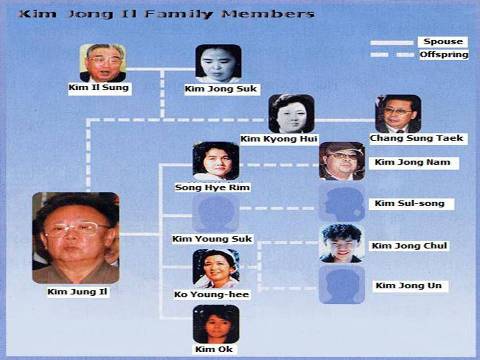 Despite the fact that we run a blog, we are skeptical about instant analysis. My colleague Marc Noland has given an interview, and we reflected earlier on the prospects for political change in interviews with Dan Pinkston for both the Asia Policy Review and the The DailyNK. We emphasized that “collapse” was unlikely, that the regime was investing institutions that would support the “great successor,” and that the major players would have strong incentives to rally around the third son as a focal point, whatever policy and personal differences they may have.

Rather than repeating ourselves, however, we comment on what analysts in the U.S. are saying about political developments in North Korea in the post-Kim Jong Il era. (A more complete catalogue of general commentary has been collected in a dossier by the National Committee on North Korea.)

Let’s start with the KCNA, though. Some unnamed Chinese source reported by Reuters and comments by the South Korean National Intelligence Service have set off a flurry of speculation about collective leadership; The Washington Post provides an example. By “collective leadership” we typically mean that executive power rests with a collective body—say, the Presidium--rather than a single individual.

For the record, that ain’t what the North Koreans are saying. The most significant document posted on the English-language KCNA site —immediately following the terse announcement of Kim Jong Il’s death—was called “Notice to All Party Members, Servicepersons and People.” The document was from “the Central Committee and the Central Military Commission of the Workers' Party of Korea, the National Defence Commission of the DPRK, the Presidium of the Supreme People's Assembly and the Cabinet of the DPRK.” For those with a Kreminological bent, the order itself is interesting, with the Central Committee first and the Central Military Commission—Kim Jong Un’s home-base--listed before the National Defense Commission, the position from which Kim Jong Il ruled; we come back to that in a minute.

But the main point is that after praising Kim Jong Il, the document identifies Kim Jong Un as the successor in unambiguous terms:

“Standing in the van [sic] of the Korean revolution at present is Kim Jong Un, great successor to the revolutionary cause of Juche and outstanding leader of our party, army and people.

Kim Jong Un's leadership provides a sure guarantee for creditably carrying to completion the revolutionary cause of Juche through generations, the cause started by Kim Il Sung and led by Kim Jong Il to victory.”

Even if the leadership structure is not formally collective, there is a little doubt that Kim Jong Un will need to forge a ruling coalition; Ken Gause, one of our favorite analysts, is clear about this point in a useful blogpost for KEI. We know that there have been both promotions and purges in the ranks of the party and military designed to strengthen the hand of Kim III. But he will certainly have to rely on old hands. Which ones? In addition to the Gause piece, Nicholas Hamisevicz at the Korea Economic Institute has a post with short bios on 10 People You Need to Know.

For those seeking more extensive coverage, Michael Madden’s North Korea Leadership Watch is the place to go. Madden’s site is particularly good at following the family dynamics, including the appearance of Kim Ok, Kim Jong Il’s secretary and last companion, at the mourning ceremony. The idea that Kim III would turn to family members is not implausible. But of course they also pose potential threats if they can in any way, shape or form be interpreted as legitimate heirs as well; the the New York Times does a decent job walking through the history, which is hardly a tale of family loyalty. The fact that the Kim Jung Un’s brothers are in exile (Kim Jong-nam) or nowhere to be seen (Kim Jong-chol)—and that neither holds an institutional position--is hardly surprising.

With respect to the formal institutions, Ruediger Frank provides some valuable analysis over at 38North. Frank has argued that recent developments reflect an attempt to revive the Party. He provides a figure on the titles used to refer to Kim Jong Il in the North Korean press, which shows a sharp increase in references to his status as General Secretary and a decline in more generic titles (leader) or military identifiers (general). 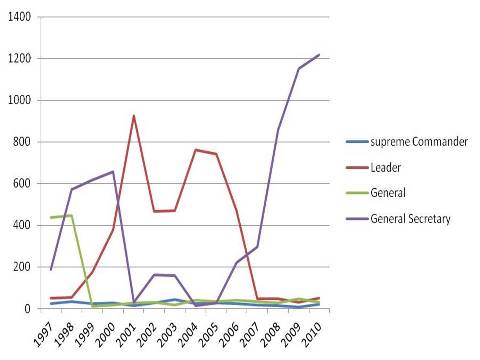 He also notes that the obituary published in the Party newspaper and signed by the Central Committee emphasizes that the “great successor” (widaehan kyesŭngja) will carry on the revolutionary cause of chuch’e—not sŏn’gun or “military first” politics. Frank concludes that “the Military First Policy is duly mentioned, but it does not stand at the center.”

We strongly agree with Frank that the regime is investing in resuscitating the KWP, which became almost dormant under KJI. But Frank’s analysis raises several questions, beyond the obvious one that Party organs are likely to emphasize the Party’s role.

The first is that saying it does not make it so. Efforts to revive the party still have to cope with a military that has become empowered during the sŏn’gun era. Chosun Ilbo ((in Korean) spins the exact same information the opposite way as Frank, noting that the Rodong editorial mentions sŏn’gun 21 times and “strong nation” 19 times, implying military first politics will continue.

And second, a curious feature of the North Korean regime is the interpenetration of military and party personnel, raising questions about whether the Party and military can really be considered as distinct and autonomous institutions.

The point can be made by simply looking at the titles of the four top-ranked military personnel:

All four are members of the Politburo, three hold positions in the NDC or CMC, another has a cabinet portfolio.

The point can also be made by looking at the composition of the Central Military Commission. Nominally, this is a party institution. But the commission consists of all 18 military personnel and chiefs of security agencies with the authority to mobilize military force. A change in the party rules also stipulates that the General Secretary of the KWP is automatically the head of the CMC. But for Kim Jong Un, the ascent to the top spot may come the other way around; from vice-chairman of the CMC, to chairman, to Party Secretary, and this will only come as a result of buying off the military. Put most starkly, is this already a kind of military regime?

Finally, Luke Herman has been providing outstanding analysis for NK News through careful parsing of on-the-spot guidance data—who is accompanying the leadership—and of formal rankings that emerge at party meetings and in funeral committees. Moreover, in the best academic tradition, Herman provides his data in the form of a spreadsheet (truth in advertising: Herman is a student at the Graduate School of International Relations and Pacific Studies, UCSD, where I teach).

Herman’s most recent post is based on a comparison of the funeral committee for Jo Myong Rok’s in November 2010 with the funeral committee list released following Kim Jong Il’s death. First, there has been almost no movement among the top twenty elites within North Korea in the past year. Ju Sang Song and Hong Sok Hyong were removed earlier, but the rest of the top 20 is the same. These top-ranking officials are listed below.

After that, however, Herman finds dramatic increases on the part of some cabinet members, department directors, and provincial leaders. The bottom line of this analysis is contained in a simple bargraph that shows the median rankings of all personnel from five institutions: the Politburo, the Secretariat, the NDC, the CMC and the Cabinet. The interesting finding is the drop in the relative standing of CMC members and the increase in the standing of the cabinet.

We asked Herman to do some further analysis on the military and he obliged. It turns out that the average ranking of all military personnel on the KJI funeral committee (or at least those who could be confirmed as military personnel) was significantly lower than on the Jo Myong Rok committee (a median ranking of 52 vs. 68, with higher numbers meaning a lower rank. No fewer than 19 military personnel showing up on the earlier committee but not making the KJI list. The analysis also confirms the rise in the standing of provincial officials as well.

We are appropriately cautious about what conclusions can be drawn from this (as is Herman), particularly since we don’t even know how or by whom such lists are generated (speculation is that it is Kim Ki Nam at Agitation and Propaganda, but who knows? It could have been Kim Jong Il himself). One explanation for the shift in rankings is simply that there are going to be more military personnel on a military funeral committee than on Kim Jong Il’s because of his role as head of the government as well as Party and military. Nonetheless, it could be that the leadership is widening out bases of support to include state elites and even provincial leaderships. This development cuts against the current pessimism—ours included—that Kim Jong Un will be completely beholden to the military.

Thanks to Jaesung Ryu and Luke Herman in Seoul.