The Following is a guest post by Andrew Yeo, Associate Professor of Politics at The Catholic University of America.

Engagement with North Korea is a tough sell. Although the Trump Administration has called for both “maximum pressure and engagement” in response to North Korea’s growing nuclear capability and ongoing missile tests, the U.S. media has focused mostly on pressure tactics. What about the engagement part?

The Trump administration’s use of the term “engagement” captures its stated willingness to negotiate, but that lens is limited. Despite the unfavorable political climate, proponents of people-to-people engagement with North Korea continue to press forward with various projects inside North Korea which are humanitarian, business, or capacity-building oriented in scope. In a recent academic paper published in Asian Perspective, I take stock of the range of activities quietly taking place in North Korea which foster interaction and exchanges between North Koreans and the outside world.

The data in the study comes from the Engage DPRK Mapping Initiative put together by Jiehae Choi Blackman. The mapping project was designed as a resource for practitioners to identify and locate past projects in North Korea and to facilitate coordination among those interested in such engagement. Although somewhat dated now (the data covers 1995 to 2012), and coming with limitations and caveats, the data provides a good cross-sectional representation of the various foreign/international organizations and their projects which have taken place in North Korea. The projects include tuberculosis clinics, greenhouses, livestock breeding, relief aid, English language training, and house construction among others.

Until 2012, the majority of foreign engagement activities (60%) have been humanitarian in nature. For instance, from 2011 to 2012, Save the Children constructed several greenhouses to improve dietary diversification in multiple districts around South Hamgyong province. From 1996 to 2002, World Vision helped build and maintain noodle factories in South Pyongan province to provide basic sustenance for children and the elderly.  Each of these project sites would then be coded as a single activity for each year. 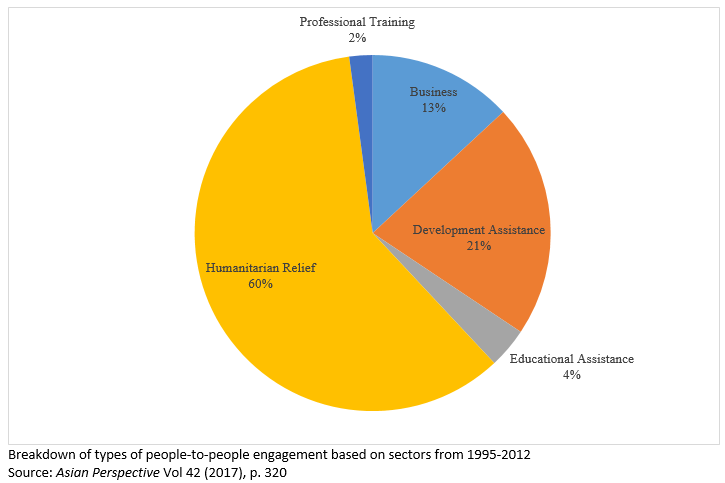 Low levels of engagement, even those humanitarian in nature, are not uncontroversial. Critics argue that such engagement indirectly benefits the regime. Recent news of Americans detained in North Korea also gives pause, and the U.S. Congress is currently working on legislation to ban U.S. travel to North Korea. However, people-to-people engagement provides a low cost means for outsiders to generate positive relationships with North Koreans. Outsiders, some of who have engaged with North Korean counterparts for nearly two decades, have some of the best grasp of North Korean norms, culture, thinking, and knowledge of every daily life. Meanwhile, people-to-people engagement offers North Koreans a channel for receiving information related to markets, business and legal practices, and capacity-building principles, which may spur greater curiosity and a hunger for knowledge beyond what the state can provide.

The Trump Administration has focused largely on tightening sanctions, but left the door open for engagement with North Korea. Although this refers primarily to diplomatic engagement, it can and should include people-to-people engagement directed at the public. It is unclear whether successful lower levels of engagement can translate into higher forms of engagement in North Korea. However, in the absence of diplomacy, people-to-people engagement is one of the few means of contact between Americans and North Koreans. Moreover, the longer-run effects may be positive if attitudes of local cadres and provincial leaders towards Americans begin to shift. Finally, by encouraging low levels of engagement, the Trump Administration can signal to the new South Korean president its tacit approval of inter-Korea engagement through civil society, even as the U.S. continues to apply pressure on the North Korean regime.