North Korea’s Trade in Latin America and the Caribbean

Part of the Trump administration’s “maximum pressure and engagement” strategy towards North Korea has been to isolate Pyongyang as much as possible on the international stage. The effort appears to be paying off as in the last few months as a number of countries have expelled their respective North Korean ambassadors, severed diplomatic ties, or cut off trade. 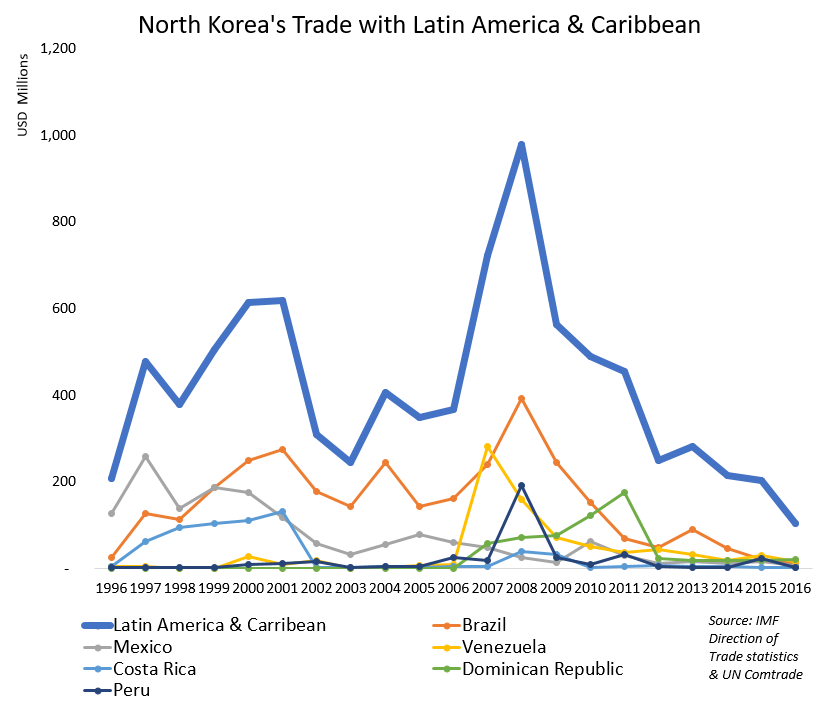 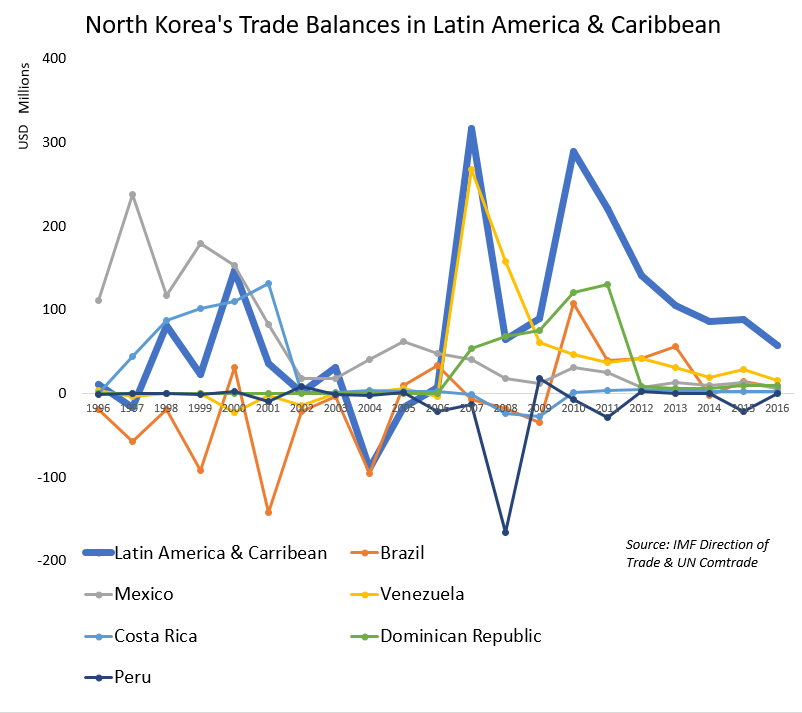 North Korea may be partly using exports to Latin America to pay for its imports elsewhere but that isn’t the main story the graphs above tell. The trade is small and its surplus in Latin America has been shrinking in recent years even as its overall global trade deficit increases. KOTRA estimates North Korea ran a $905 million global trade deficit in 2016. And caution is warranted in analyzing the above data for a few reasons: First, data emanating from countries such as Venezuela and Cuba should be taken with a grain (or rocks) of salt. Second, the possibility that a customs official checked the wrong Korea box is real (See recently the case of Luxembourg where I suspect this might have happened).

In the chart below, I’ve taken timely data from the North Korea in the World Project and listed the countries in Latin America and the Caribbean which maintain diplomatic relations with the DPRK; I count twenty-one countries. But if using the presence of embassies in each other’s country as a proxy to measure the strength of relations, the picture in Latin America looks bleaker for North Korea. There are only two Latin American countries which operate embassies in Pyongyang—Brazil and Cuba—and five that permit Pyongyang to run embassies in their countries. More, two of the countries which have DPRK embassies are cracking down: Mexico and Peru have recently downgraded their relations with the DPRK and declared their respective incumbent North Korean ambassadors persona non grata.

This reflects growing international pushback against North Korean military provocations and the recognition—indeed codified in last year’s UN Security Council resolution 2321—that North Korean embassies abroad are used for illicit activities. It really should be no surprise that North Korea has about twice as many embassies abroad as countries have embassies in Pyongyang. The metropoles are turning the screws as well as in the last month Spain expelled its DPRK ambassador and downgraded relations, and Portugal cut ties altogether.

As in much of the world, it’s less and less worth it for Latin American countries to maintain normal relations with Pyongyang. That said, Venezuela and Cuba are certain to remain friendly with Pyongyang and as a recent run-down on DPRK-Latin America diplomacy from Statfor notes, Brazil and Chile have particular economic interests—not with North Korea—but with China, to stay neutral. Was there any doubt that this would somehow come back to China?