Last week, South Korean government-affiliated KOTRA (Korea Trade-Investment Promotion Agency) released its annual report on North Korea’s trade relationships, which form a crucial part of the lifeline for the Kim regime. The data show that in 2016 North Korea’s trade grew by about 5 percent, with China accounting for around 93 percent of North Korea’s overall trade, even growing its trade relationship with the DPRK amidst two nuclear tests, a bevy of missiles tests, and two new security council resolutions.

The real share of North Korea-China trade as a percent of total trade is slightly lower than KOTRA’s 93 percent figure as KOTRA does not factor in inter-Korean trade. Nevertheless, this number is not wildly inaccurate since any substantial inter-Korean trade was limited to the first two months of 2016 before Park Geun-hye shut down the Kaesong Industrial Complex indefinitely in February 2016. (More on inter-Korean trade when the Ministry of Unification publishes the 2016 data). 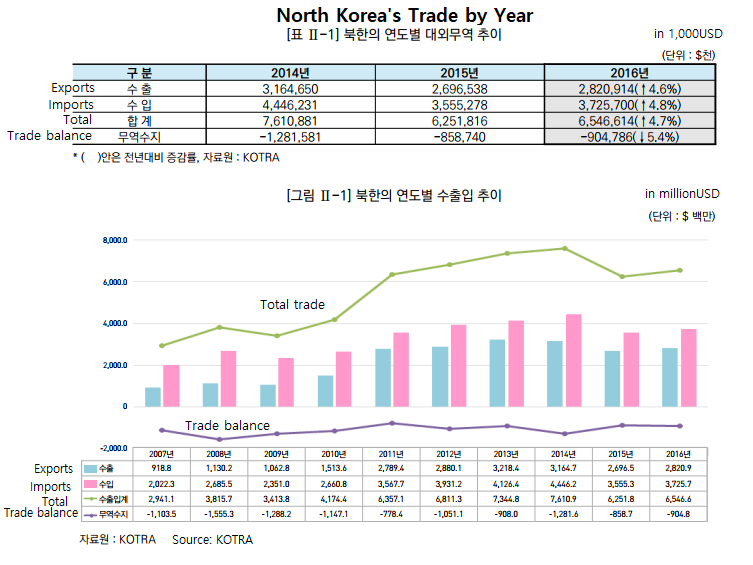 The report shows that Sino-North Korean trade increased by 6 percent—outpacing the overall growth rate in North Korea’s global trade—and with approximately equal shares of the increase coming from imports and exports. China’s largest import from the DPRK was coal and mineral fuel, which rose to $1.2 billion in 2016, up 12 percent from the previous year. These data do not represent the current picture as China banned North Korean coal entirely last February, and from March through June 2017 China Customs has reported exactly zero dollars in North Korean coal imports. 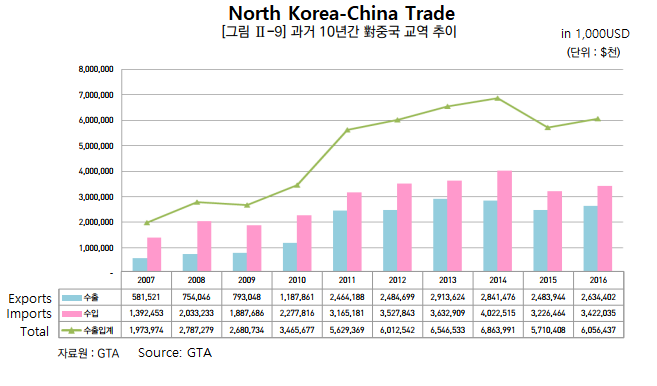 The KOTRA report also provides the service of imputing figures for Chinese crude oil exports to North Korea, which China Customs inexplicably ceased reporting in 2014. KOTRA holds the volume constant in 2016 at 525 thousand tons and due to the downturn in the global price of oil, this resulted in an 18 percent decrease in the value of China to North Korea crude oil exports to $230 million. This means that North Korea’s massive trade deficit is understated even more once you factor in the Chinese government’s obfuscation of the data.

A look at North Korea’s other top trading partners in 2016 shows decreases from Russia, India, Thailand, Singapore, and Thailand, but a large increase in DPRK-Philippines trade. Maybe there really is something to be said about the importance of building US-Philippines ties to better coordinate on DPRK policy. Although, don’t expect these coordination issues to get hammered out at the highest level as President Duterte just last week said that he would never visit the “lousy” United States.

But more bizarre than the increase in DPRK-Philippines trade is the reported emergence of Luxembourg in the top 10 trading partners list. According to KOTRA’s report, Luxembourg exported $15 million to North Korea in 2016—all of it perfume and cosmetic products—up from zero in 2015. It’s unclear if this actually happened or if this is the result of a data input error. UN COMTRADE data for 2016 shows Luxembourg exported only about $15,000 (not million) to North Korea but imported $1.2 million from North Korea, including around $850,000 in electronic equipment. There’s a good chance someone in one of the data agencies confused North and South Korea.

Of course, this also means that we can’t rule out data input errors compromising the sanctity of the data with other countries as well, including the Philippines. But if this is not just a data error, Luxembourg would be in wanton violation of European Union regulations banning luxury goods exports to the DPRK.

The KOTRA data show us once again that the North Korea trade story is about China, China, China, and a few other countries. As part of the “maximum pressure” aspect of the US’s North Korea policy, policymakers are attempting to exert diplomatic pressure on countries where North Korea conducts licit and illicit trade across the world. But if China continues to provide a safe space for North Korea to develop its nuclear and missile capabilities, Pyongyang isn’t going to feel much squeeze at all.

Correction: Previously the estimate for Chinese crude oil imports to North Korea was incorrectly listed as $438 million. In 2016, KOTRA, in fact, estimated the figure to be $230 million.