SWIFT activity is measured by the unit of a FIN message, which also anchors the SWIFT index, a leading indicator of GDP growth. To give some sense of the density of financial integration, SWIFT carried 5.066 billion FIN messages in 2013, or about 20 million messages per day. The overwhelming majority of these were payments settlement or security transactions, although the organization also handles treasury business and even some trade-related messaging.

In 2001, NAPSNET caught the Yonhap story that North Korea had joined SWIFT, exposing the country to at least some transparency on its foreign financial transactions. Dan Wertz at the National Committee on North Korea recently alerted us to the publication of the most recent data on North Korea’s SWIFT activity. Below, we plot total SWIFT traffic in the world on the right-hand axis against North Korean traffic on the left (note the pause in world messaging during the great recession, and the subsequent upward march). 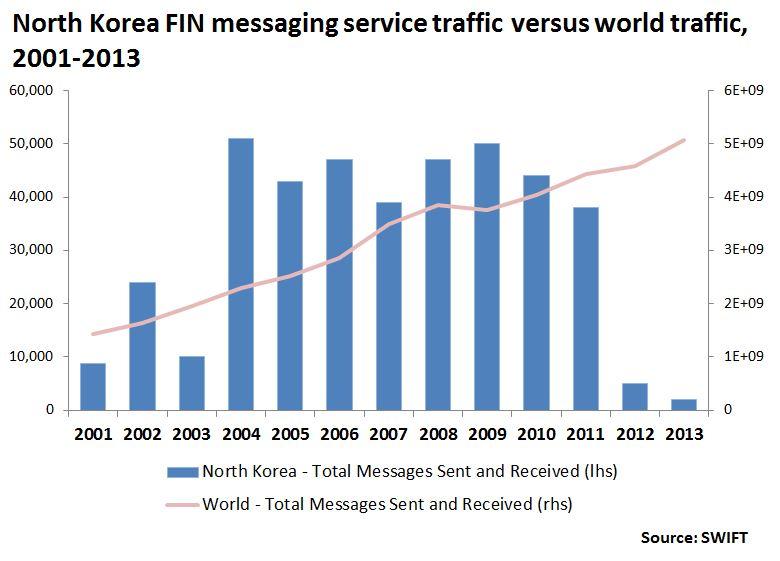 North Korea’s FIN traffic is uncorrelated with global trends. After some oscillation in 2001-3, North Korea’s SWIFT traffic jumped to 50,000 sent/received FIN messages in 2004, from which it witnessed a slight secular decline through 2011. To put this in perspective, South Korean institutions sent and received about 69 million FIN messages in 2013.

The most recent data suggests that SWIFT messaging virtually collapsed in 2012-2013. In 2013, seven North Korea shareholders and 16 institutions connected to SWIFT received only 2,000 messages and sent nothing. Appropriate comparison countries to North Korea in 2013 would include Kiribati (9 thousand messages), Tuvalu (6 thousand), or Somalia (0).

What is going on here? One possibility is "nothing." It is possible that SWIFT has simply erred and there is no change of this magnitude in North Korea's FIN messaging. One hint that this may be the case: the discrepancy between sent and received messages, which tend to trend together. Is it possible that North Korean banks did not send a single FIN message during these two years?

If the data is correct, 0r even if there has been a more modest fall-off, what might account for it?  First, the timing does not fit well with the multilateral sanctions efforts. UNSC 1874 introduced financial sanctions in 2009, but there is no significant change in DPRK messaging until 2012. The 2012 fall off does not correspond with the more targeted sanctions introduced in 2013, when a number of additional individuals and entities were named.

One possible explanation is that the Financial Action Task Force (FATF) might be having an effect. Back in August 2013, I did a post suggesting that North Korea was reaching out to the FATF. The organization issued a statement in 2011—no doubt at US urging—that North Korea had failed to address significant deficiencies in its anti-money laundering and combating the financing of terrorism (AML/CFT) regime. As we learned from the Banco Delta Asia case, even issuing such an advisory is enough to give financial institutions pause. In February of this year, the FATF reaffirmed its statement on the DPRK (reproduced below). Under this view, the FATF notice probably triggered a tightening up of surveillance of business with the country.

There is, however, a third possibility: that North Korea is increasingly operating outside of the SWIFT network through the use of cash or other informal financial networks. How this might work is even a deeper mystery, but would presumably rest on a network of couriers, informal financial institutions, or perhaps banks that are not connected with the SWIFT network, nor vulnerable to FATF pressure.

A final note on sanctions. Although SWIFT does not provide information on individual banks, the organization appears to be conducting business with sanctioned financial entities such as Daedong Credit Bank and the Foreign Trade Bank of the DPRK. Pressuring SWIFT to comply with global or national sanctions on North Korean banks, or demanding that it sever ties with the country altogether, would significantly increase pressure on the country.

The FATF remains concerned by the DPRK’s failure to address the significant deficiencies in its anti-money laundering and combating the financing of terrorism (AML/CFT) regime and the serious threat this poses to the integrity of the international financial system. The FATF urges the DPRK to immediately and meaningfully address its AML/CFT deficiencies.

The FATF reaffirms its 25 February 2011 call on its members and urges all jurisdictions to advise their financial institutions to give special attention to business relationships and transactions with the DPRK, including DPRK companies and financial institutions. In addition to enhanced scrutiny, the FATF further calls on its members and urges all jurisdictions to apply effective counter-measures to protect their financial sectors from money laundering and financing of terrorism (ML/FT) risks emanating from the DPRK. Jurisdictions should also protect against correspondent relationships being used to bypass or evade counter-measures and risk mitigation practices, and take into account ML/FT risks when considering requests by DPRK financial institutions to open branches and subsidiaries in their jurisdiction.

The FATF urges the DPRK to engage again with the FATF to address its AML/CFT deficiencies.