North Korea-China Trade: What Will Be Sanctioned Next?

The UN Security Council passed resolution 2371 on August 5 which included a new round of sanctions on a variety of North Korean exports. The most notable sanctions include a full ban on North Korean exports of coal, iron and iron ore, lead and lead ore, and seafood, which has been a growing industry.

As usual, the story with North Korean sanctions is primarily about China and how tightly China agrees to tie its hands. China’s share of North Korea’s trade in 2016 increased from 64 percent to 88 percent after Park Geun-hye shuttered the Kaesong Industrial Complex in February 2016, cutting South Korea’s share from 30 to 5 percent.

Not only did its share increase, but China’s absolute trade with the DPRK also increased from 2015 to 2016 as well as in the first half of 2017. Thus, China now very likely holds an even higher share of North Korea’s overall trade than in 2016, although China’s share of the North Korea trade pie could go back down depending on China’s sanctions enforcement and some combination of the rest of the world and Russia picking up some of the slack. 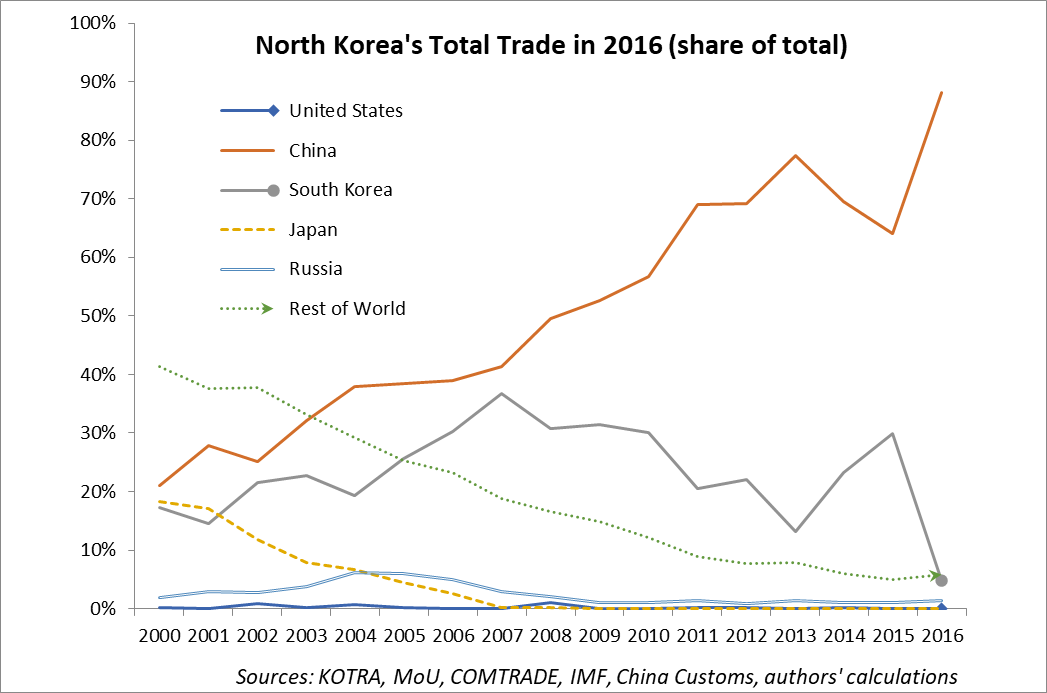 But assuming North Korea does not cease provocations, where will sanctions go next? A closer look at China-North Korea trade from the KOTRA report (below) shows that much of the top five categories of North Korea’s exports to China are now banned. The mineral products category is almost entirely coal, which is banned, and various ores and slag include many banned products; seafood is also now banned.

In terms of the top 5 product classifications—which comprise 88 percent of total China-North Korea licit trade—this leaves the two textile categories as the only remaining ones left completely untouched by the UN. The negative growth rate of the textile categories may suggest there is decreased demand on the Chinese side for North Korean products. This could be because in an increasingly sanctioned environment, Chinese businesspeople might see investment even in non-sanctioned activities as too high risk given the trajectory of sanctions policy. However, anecdotal evidence continues to trickle out suggesting that North Korean textile factories are humming along nicely. Or perhaps, textile manufacturing is being done increasingly by North Korean laborers on the Chinese side, meaning it wouldn’t show in the data.

But even though sanctions have recently focused on cutting North Korean exports, China is increasing its own exports to North Korea. These Chinese exports are more diverse; the five top categories comprise just 41 percent of total imports from China. From 2015 to 2016 total imports rose by 6 percent and in 2017 they have increased even more, at 29 percent during the first half of 2017. As Steph Haggard noted last month, this means that North Korea is running a massive trade deficit. North Korea’s trade deficit is not new but the 2017 first half figures show the highest year-on-year trade deficit on record.

What is not included in the above charts is that China continues to export crude oil to North Korea, which KOTRA estimates to be at $230 million in 2016. It is hard to know exactly how accurate this figure is since China has not reported crude exports to North Korea since December 2013. In fact, in 2016, KOTRA imputed the crude figure by simply holding volume constant and adjusting for the global decrease in the price of oil. Oil imports could be up, down or sideways. One possible benefit for Beijing: with no data being reported, oil might be a way to either squeeze—or support—the regime without any outsiders being able to scrutinize what they are doing.

China has been reluctant to cut off oil to North Korea but has also not flat out ruled out restricting crude exports to North Korea either. In a Global Times piece from July, it was suggested that the punishment for a sixth nuclear test could be oil export restrictions. In June, China National Petroleum Corporation suspended fuel sales to North Korea purportedly due to concerns that Pyongyang couldn’t pay for it and since mid-April gasoline prices have spiked in the North.

But even if gasoline prices are now high, other macroeconomic indicators suggest the economy is at least doing okay. The black-market exchange rate remains stable despite two ICBM tests. The rice picture is a little less clear, and the drought could be playing a role. Rice prices are up a bit from the beginning of the year, but stabilized in July. It’s still unclear if UNSCR 2371 has affected the markets since the most current data was recorded before its passage. 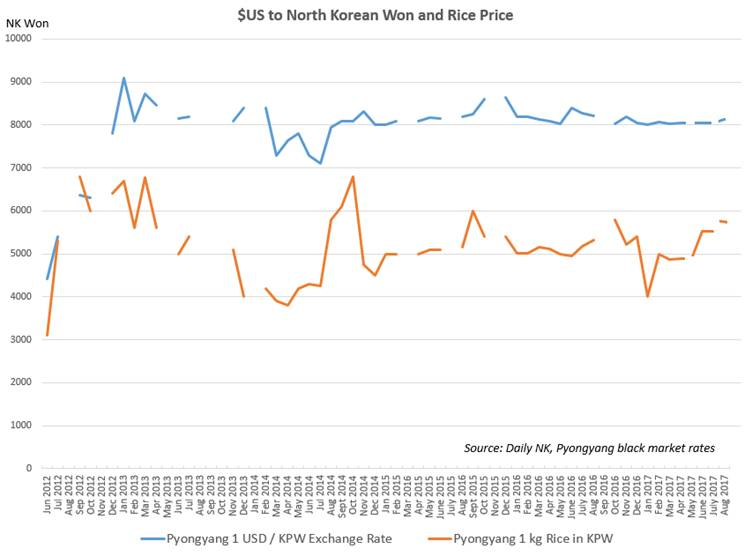 The trade data show that the recent bevy of sanctions has concentrated on North Korea’s largest exports to China. Given the pattern of North Korea’s provocations and corresponding retaliatory sanctions, investors may be reluctant to put more into the North Korean textile industry although they could continue to source from the country until they can’t. Given the North Korean economy’s ability to adjust to sanctions, I wonder whether a more effective response will require China cutting back its exports too. Biggest punch would be oil, more on that later.