Yesterday, Beyond Parallel, a project run out of CSIS, published results of a survey on North Korean consumption of foreign media. This is the third survey report of North Koreans living in North Korea that the project has released. The first one, covered here, was on the public distribution system, markets, and sentiment toward the government; the second covered North Korean discontent and regime-critical joke-telling.

What makes these reports unique is that they survey North Koreans living inside North Korea, as opposed to  refugees, which is what most other reports rely on, including the survey work in the North Korea: Witness to Transformation book. The key findings of the CSIS survey are that 92 percent of North Korean respondents consume foreign media at least once each month and 58 percent consume it every day. 83 percent of respondents said they found outside goods and information to be of greater impact on their lives than decisions by the North Korean government. 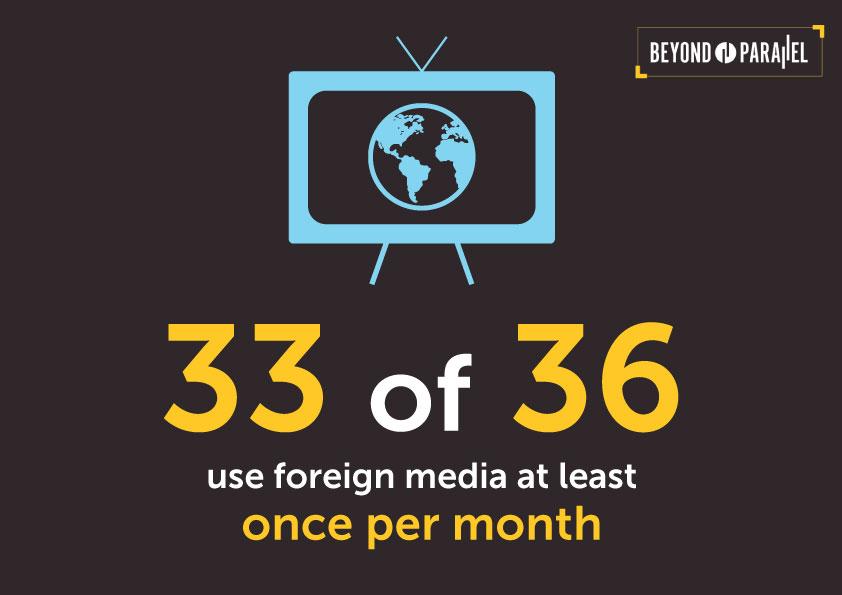 The results conform to surveys conducted by Seoul National University of recent refugee arrivals to South Korea that show that around 90 percent of escapees had had some access to South Korean media. The results show higher foreign media consumption than the North Korea: Witness to Transformation’s survey conducted in fall 2008 (below), but align with the general trend of increasing access to outside information. The retrenchment era (starting in 2005) shows the percentage of the populace that had accessed foreign media to be in the mid-50s. 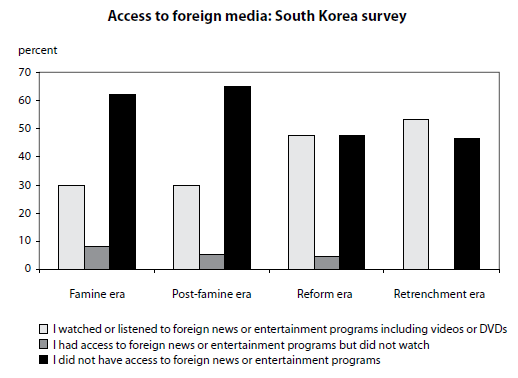 The Beyond Parallel survey notes that respondents access the information because of its usefulness and the impact of outside information on their lives. This includes access to news reports and weather that is deemed more accurate than state-run media. Jieun Baek, in her book North Korea's Hidden Revolution (reviewed by Steph Haggard here), has a chapter on North Korean millennials where she argues that they do not access foreign media for politically motivated reasons but rather for consumerist and market-related information. That in itself is a threat to regime stability. In the North Korea: Witness to Transformation survey, consumption of foreign media was associated with more negative assessments of the regime and its intentions.

On the methodology, Beyond Parallel relies on “convenience sampling” as opposed to random sampling to account for the challenges of conducting surveys in the country. In a totalitarian state a random sample is simply not feasible and therefore the surveys done cannot be unbiased; Beyond Parallel is quite clear about this, dedicating an entire page to explaining the tradeoffs of this methodology. The sample size is small (N=36) and cannot be regarded as a complete description of public opinion as Beyond Parallel points out. But of course, neither can surveys of refugees residing outside of North Korea, which have their own inherent biases, though in Witness to Transformation, the surveys, which are considerably larger than the Beyond Parallel survey, are re-weighted to reflect the observable demographic characteristics of the resident population of North Korea.

It is impressive that Beyond Parallel is able to conduct and publish these surveys. Caveats aside, the results complement previous results from other surveys and provide a unique perspective of North Koreans of gender, age, occupation, and regional diversity. The bottom line is that the North Korean government cannot deliver the benefits to the citizenry that it did a generation ago and people increasingly fare for themselves. North Koreans have greater access to external information than ever before and make use of it. More efforts to understand how this affects society and the regime are greatly welcomed.