The early launch took us all by surprise.  With North Korean media as late as Tuesday extending the launch window until the 29th, few were prepared for the surprise launch early Wednesday morning Korea time. None of our contest entrants even guessed this week, but we still have two winners. 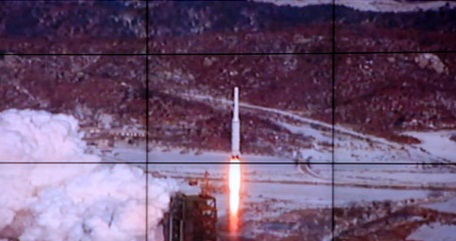 The closest prediction was December 17th by Roger Cavazos of the Nautilus Institute and Laura Corser at Indiana University. Both will receive autographed copies of Witness to Transformation and the respect of Korea watchers the world over.

Would you like an autographed copy of your own?  There is still a chance.  The 2nd annual Turkey Shoot: Jill Kelley Six Degrees of Separation contest is still under way with winners to be announced on Christmas day.

All you have to do is make a connection beginning with Jill Kelley and connecting her with Stephan Haggard, Kim Jong-un, or Mullah Omar.  Its easier than it sounds.  Just see the example by Marcus Noland reprinted below.

"Jill Kelley was infamously bombarded by harassing emails from Paula Broadwell (second from left), whose thesis adviser at the Kennedy School was Stephen Walt (third from left), who was a grad school buddy of Steph's.  From Tampa's former honorary Korean consul to Steph Haggard in three easy steps!"

Think about it.  We all know Miss Kelley was formerly an honorary consul for the South Koreans.  There has to be an easy connection there to Kim Jong Un.  What about Kelley to Broadwell to Petraeus to somebody to Omar?  There are plenty of options.

Leave your entries in the comments below or in the original post and we'll announce the winners on Christmas day.

Dear Witness to Transformation - thank you for the unexpected windfall. First (and likely only) time North Korea has had a positive impact on my life. Seriously, thank you and now time to get out the kids spirograph to make turkey shoot connections.